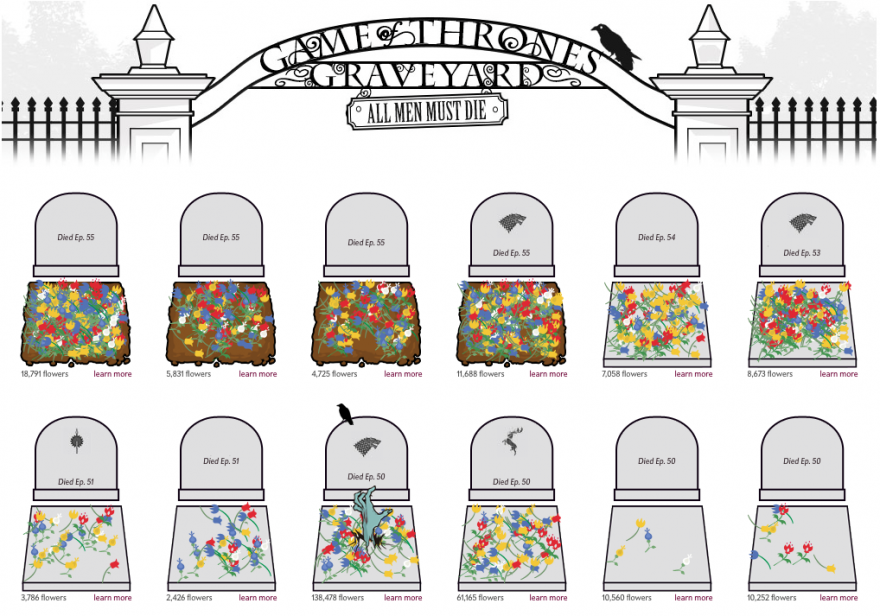 Warning: this story will allude to events up to Episode 5 in Season 6 of Game of Thrones. Featured image is censored because I don’t want to get yelled at on the Internet for spoilers.

What is dead may never die. Valar morghulis. Hodor.

HBO’s bleak fantasy epic Game of Thrones, based on the book series written by George R. R. Martin, has a number of recurring mottos. All mostly meaning, or leading to, death. The show’s made headlines often for killing off beloved characters in shocking, gut-churning ways. From the tense betrayal in the Red Wedding of Season 3 that offed a handful of main characters in one fell swoop, to Episode 5 of the latest season, wherein a sweet man met his demise in the most heartbreaking of ways. That’s how death works in Game of Thrones: it’s inevitable, and it sneaks up on you. It’ll happen someday, so it’s best not to sugar coat it.

Due to the frequency at which Game of Thrones fans are mourning character deaths, Slate has created a virtual graveyard for the dozens of deceased. Perfect for leaving flowers and saying a prayer. Each gravestone bares a name; be it a former king, a lord, or even a peasant. Some stones are even accompanied by a signifier. Like a measly crow perched atop the grave for the deceased men of the Night’s Watch, or a house sigil for the royal lords, ladies, and of course, direwolves of Westeros. For one specific resurrected character, a zombified hand emerges from the grave.

That’s how death works in Game of Thrones: it’s inevitable

The more popular characters are littered with flowers, sometimes growing to the hundreds of thousands (as a tally beneath each stone reads). The lesser characters are less-popular though, as their graves gather virtual dust over time. As Slate writer Chris Kirk writes in the interactive project’s description, “good or evil, they all touched our lives in some way.” Right he is. Rest in peace, former denizens of Westeros and beyond. Unless you’re resurrected by the Lord of Light or whatever.

As Roose Bolton once did, you too can send Lannister-laden regards over on Slate’s virtual graveyard.