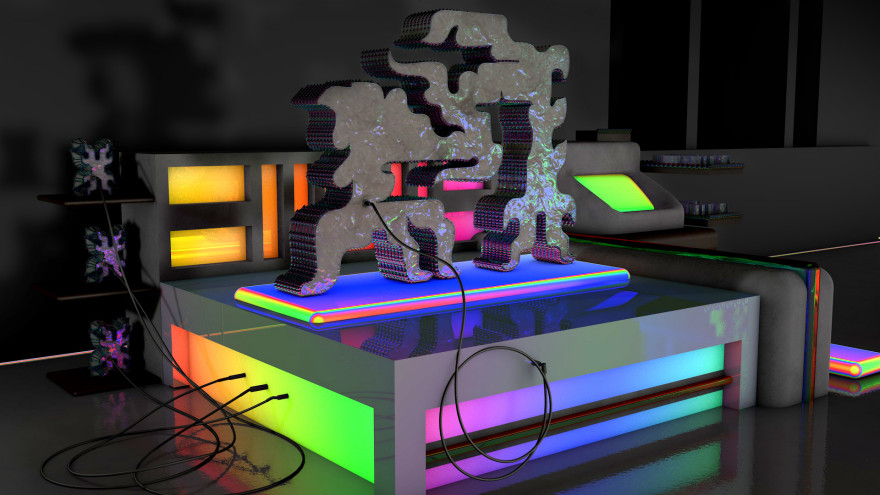 LaTurbo Avedon’s Panther Modern opened up its tenth room recently. It’s an online exhibition space that encourages each of its contributing artists—all of who have their own 3D model file known as a “Room”—to experiment with the possibilities of software when creating their installations. The architecture of this exhibition is entirely virtual. It’s altered according to the aesthetic demands of every project. All the rooms together form a honeycomb of net art that wouldn’t be possible in physical space.

MSHR describes their work as comprising “sculptural synthesizers” and “ritualistic performances.” Typically, they host alien discotheques that might involve moving their hands over peculiar interfaces, or splaying themselves across a lavish, circuitous “hyper scape” that resembles the exposed guts of a Venetian emperor. With the absence of the two performers (Murphy and Cooper) in Room Ten, it’s the standalone synthesizers that dominate the digital space here as if their surrogate offspring.

What you see immediately are large concrete symbols pulsing with the colorful exuberance of deep sea jellyfish amid the black space. There are liquid computers with fluorescent rainbow bead trimmings and steel-ribbed furniture adjacent to mirror boxes. Looking strictly at the shapes, there’s a mixture of occult paraphernalia and ancient glyph patterns; the images are labelled with words such as “Ursa” (perhaps referring to the constellation) and “Phurpa” (an embellished ritual dagger from Tibetan cultures).

MSHR explores these ancient hieroglyphs as if through the eyes of an electronic future, one that these icons have been dragged into by time, and manipulated by their technology so as to make them comprehensible. So there are cables and plugs running between the iconic structures to supply them with gratuitous electric currents, as if they were meaningless without some kind of neon energy running through them, some colorful life in their bones.

MSHR brings more than this curious interplay of the ancient and the future—aged stones turned into psychedelia—to their space. It’s a show of both light and sound. As you open up Room Ten in your browser you are confronted with an analog machine screech that simultaneously pip squeals as if performing a guitar solo while barking in deep-bubble synth tones. It’s a lot to take in at first, but the sounds inform your perception of each digital structure, just as the carefully selected lighting, layout, and camera angles do.

How you interpret all of these vibrant installations is up to you. Even if you get nothing out of it, you can probably still enjoy the kaleidoscopic allure of it all, spread across the room as otherworldly beings in magnificent display. And if not that, then you have the other nine rooms of the Panther Modern to check out, finding something more to your taste.

You can access all of the rooms in the Panther Modern using the links here. For more information on the works of MSHR check out its website.