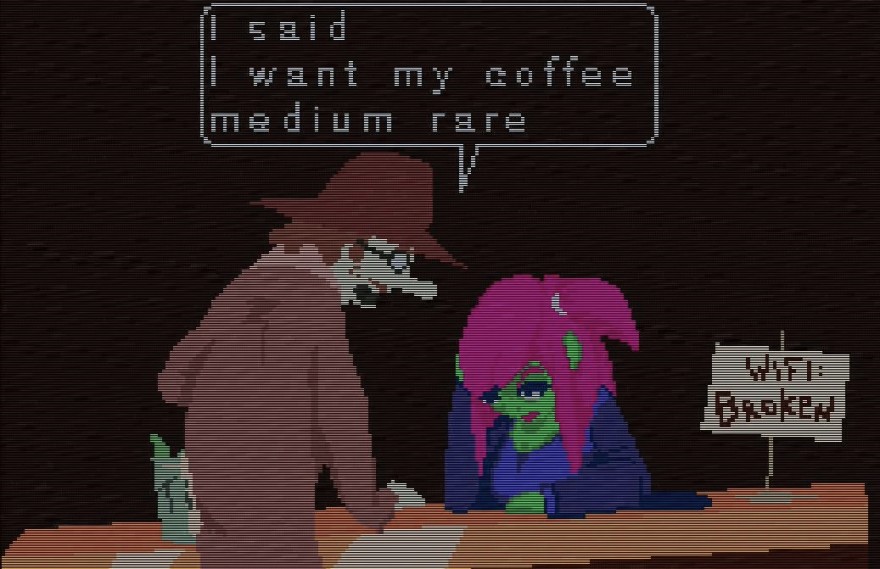 There’s a building that has sat at the west end of Grand Rapids, Michigan for over a century. It used to be a bank but has since been transformed into a coffee shop called The Bitter End. It sells loose leaf teas, Ghirardelli mochas, and something called a “bulletproof Tibetan coffee.” Its menu is trying to be chic as is the case with most modern coffee shops. But the shell of the building that houses all of these trade goods hasn’t lost its history.

During the renovation, the owners dressed up those old bricks to fit the Neoclassical styling they would have worn when erected back in the 19th century. Walk inside and you’re greeted with tin ceilings, porcelain tile floors, oak woodwork, and leaded glass windows. The intention, according to the shop’s dated website, is to evoke a European ambiance: “dark and comfortable, the walls covered with distinctive and unusual artwork with a background of jazz, blues and folk.”

It comes as no surprise to me that artist, musician, and videogame creator Amon26 (aka Benjamin Braden) loves it there. The Bitter End is right up his alley. He’s known in small circles for giving life to the creatures of his recurrent nightmares inside his games. Most of which share an interest in a rich, antique type of horror: snarling beasts and demons, the end of the world, visions of hell, unimaginable tortures. He patches it together with pixels that share palettes and themes with the hellish paintings of William-Adolphe Bouguereau, Gustave Doré, and Francisco de Goya, all of who worked in and around the Neoclassicism movements that The Bitter End elicits.

“It’s Jack Kerouac, it’s James Dean, it’s GG Allin and it’s unlike any other place I have ever been,” says Amon26 about the coffee shop, “and is filled with character, charm, and strangeness.” It’s also the inspiration and centerpiece for Amon26’s latest game. Titled Mud Slinger, you play a woman called Annie who has just started working at The Bitter End. It’s about the daily work of a barista, the endless parade of weird people at your cash register and their odd requests, as well as the rabid badgers that run rampant inside cafes.

Yeah, Mud Slinger isn’t exactly a simulator. Instead, it’s Amon26’s spin on the peculiar character that The Bitter End embodies. This extends to the odd customers, which include robots that want their coffee like oil, and sharks out of water gasping for anything wet. You play it like you would an arcade shoot ’em up. So, shooting coffee at the customers as they snake their way from the front door to your position at the bottom of the screen behind the counter. They approach you staggered, dancing from left-to-right in rows that steadily increase in speed. Essentially, it’s Space Invaders realized inside a weird coffee shop.

fling coffees rapidly as if your arms were machine guns.

The power-ups that fall through the door are thrown out of car windows that speed along the road outside. There’s a bag of cash that clears the room, what seems to be a knife you must avoid, and the badgers that bounce around like pinballs tearing people up. You also have a “BullShot” meter that fills up when you shoot customers. When it’s full, you fling coffees rapidly as if your arms were machine guns. Apparently, the BullShot is one of The Bitter End’s unique blends of coffee. “Yes, they do exist and yes, they are horrible,” writes Amon26.

I have to wonder if the owners of The Bitter End will ever find out about this little videogame tribute to their quirky coffee shop. Mind you, judging by how outdated their website is they probably aren’t too computer-savvy. Perhaps it’s for the best that they avoid throwing virtual coffees at their customers, instead sticking to selling real espresso with a crusty bagel among the peculiar décor of that endearing old building.

You can purchase Mud Slinger for $1 on itch.io.