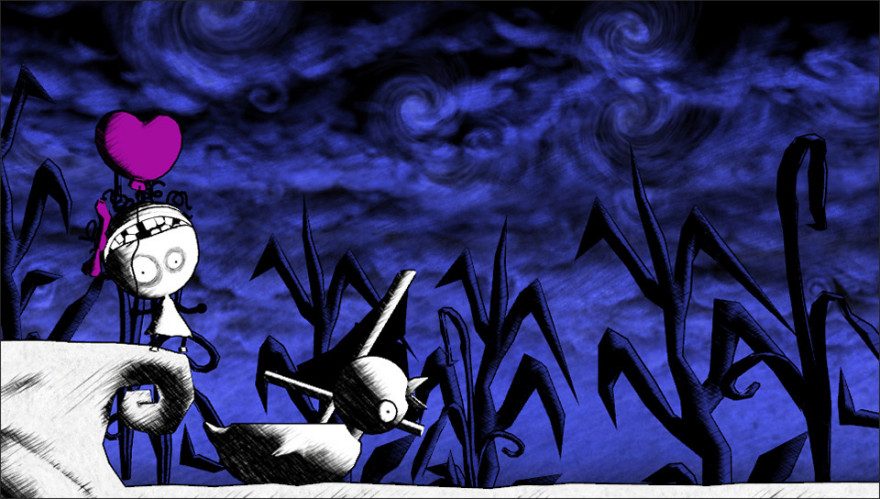 Murasaki Baby is a game about parenthood, which means it’s really about the anxiety of being a parent. I’ve heard these fears secondhand, from friends recounting 3AM wake ups, covered in dread sweat from nightmares they didn’t know they had in them. A bookstore’s parenting section is a neverending font of potential horrors. Of course these anxieties have made their way into games. I’ve played through them in The Last of Us, Bioshock: Infinite, and The Walking Dead.

We’re lucky: This isn’t another shooter. But it’s all surrounding that same urge to protect. Murasaki Baby goes for a gentler approach. Baby is a—well, yeah, but you do not play as her. Instead, with the Vita touchscreen, you hold her hand and drag her along, trying to protect her and help her find her mother while traveling through a series of sub-Grimm morality tales. The world is overbearing and ominous. In other words, it’s a place you need to protect Baby from.

The art direction carries a lot of these fairy tales. Murasaki Baby has a beautiful crosshatch style that’s a bit Edward Gorey with a dash of Jhonen Vasquez. Small, one-eye, angular spiders wait in the dark, while flying safety pins hover, ready to sting. This is a world of girls with monstrously large hair, of large bunny rabbit costumes with boys held hostage inside him, of two conjoined twins, one good, one evil, who shift control through gravity. Are they cautionary tales? The many possible futures of Baby? Another shared anxiety with its shooter next-of-kin: They’re fixated on preventing children from becoming (sometimes literal) monsters.

The world is overbearing and ominous.

These monsters in Murasaki Baby aren’t hard to deal with. The puzzles involve using the touch screen to switch moods. This being modeled after Edward Gorey’s style, the moods shift from menacing to dangerous to disturbing. One transports Baby to a frozen wasteland, another summons a giant eye to stare down and make Baby feel, literally, small. As soon as you can summon the frozen wasteland, you know how you’re going to cross a body of water just a few steps ahead.

But while the puzzles aren’t meant to be difficult, I do find myself stymied at every turn. I need a thumb to hold Baby’s hand and move her along. And another to hold her tiny balloon with a heart which is videogame for “protect this.” And I need to use my finger to poke away at the flying safety pins, while using the back touchscreen to shift into another world. It’s too late: The screen obscured, the balloon pops, and I’m back at the beginning.

There is no elegance in the touch controls. Holding Baby’s hand is frustrating. Pull too far and she falls and takes a while to get up again, but play it safe and keep it slack, and she might as well be crawling. More frustrating is when the camera pulls back, throwing off the rhythm and randomly leading to a pratfalling Baby. There’s is no intimacy created with the touch controls, just confusion and frustration.

Not being able to connect with Baby, to think of her as more burden than child, soured me on Murasaki Baby. With poor touch controls, the designers have turned a small, cute game into a bit of a mess. Even the art, one of the best parts of the game, is obscured by crude thumbing at the screen. It’s not a good sign when a game about parenting makes me resent the child.