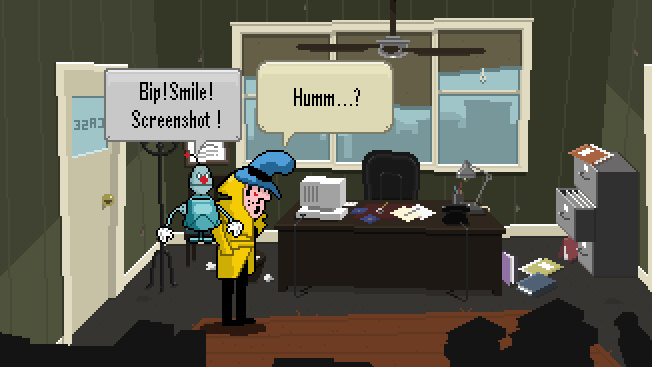 Title:
Murder in the Hotel Lisbon

Saudade is a Portuguese word that can’t be translated into other languages, but its meaning has a lot to do with what we call nostalgia: a sense of emptiness, something missing. It connotes both pleasure from the recollection but pain from the absence of whatever it is. It’s a phenomenon that drives Portugal’s traditional music fado, which tends to be melancholic and celebratory at the same time. These are songs that everyone knows in Portugal; it’s common to go into a small restaurant and find a fado singer performing a live set.

I’ve never played a game that featured fado before.

That’s exactly what happens in Nerdmonkeys’ Murder in the Hotel Lisbon. Detective Case starts a conversation with the fado singer. When he claims to be a big fan she breaks out into song, specially for him, which continues on loop until you leave the restaurant. It’s a beautiful moment for its unexpectedness but for its cultural specificity. I’ve never played a game that featured fado before, and I don’t know when I will again. But as soon as she started singing though, it brought back a well of memories from a trip to Lisbon; I was standing at the edge of a crowded bar as an amateur fado singer performed with no musical accompaniment. I felt happy to have been reminded of that moment but also sad that it’s lost forever. I experienced my own saudade.

While Murder in the Hotel Lisbon is a goofy comedy point-and-click adventure in the spirit of the classics of the genre from the 80s, it is also suffused with a strange kind of melancholy: the hound-dog Detective Case with his 5 o’clock shadow and his wonky blue hat, his painfully unfunny robot companion named Clown-bot who can’t join the circus because he’s scared of children. The way he moves is languid, exhausted. The city itself suggests a faded seaside glamour. It’s both retro (the 80s arcade machines, the wine bar, the references to Rubix cubes) and pining for another time altogether. Case spends a lot of time complaining about prices and saying how much cheaper everything was when he was a youth: cigarettes, shoe-shines, and so on.

The core of Murder in the Hotel Lisbon is essentially a pure exercise in nostalgia.

Clown-bot is the only person aware of the fact that they only exist in a videogame, and there are some nice playful moments with this. As this kind of meta-narrative or meta-gameplay becomes increasingly common in the indie sphere though, it becomes harder and harder to simply nod in its direction without incorporating it more fruitfully. The core of Murder in the Hotel Lisbon is essentially a pure exercise in nostalgia or suadade: an attempt to recreate an old-fashioned 80s point and click adventure, not re-imagined for our time but merely replicated as closely as possible. Even the native resolution of the game is 256×192, the same as the ZX Spectrum 48k. The trouble with so closely mirroring these games is it draws the comparison absolutely. Why wouldn’t you just go back to those original games instead? The logic by which you match up clues with lines of enquiry is frequently haphazard, more a case of trial and error rather than a more satisfying process of deduction. Dialogue loops restart after they have stopped becoming relevant and you have to keep cycling through conversations you’ve already had.

Games made by tiny teams like this can be excused a lot of things. The basic graphics and the jerky animation are intentional and part of the game’s cartoonish charm. There’s the danger of fetishizing this kind of clunkiness, though, and I think it’s important to be honest about whether you’re enjoying playing something on its own merits or if you’re enjoying the experience of nostalgia for a time when you had more time and patience. The sweet spot is when a game gets the balance just right, knowing that nostalgia can only take the game experience so far. It’s something that, for all its quirky and charming moments, Murder in the Hotel Lisbon never fully hits on the mark. It’s left, like us, pining.