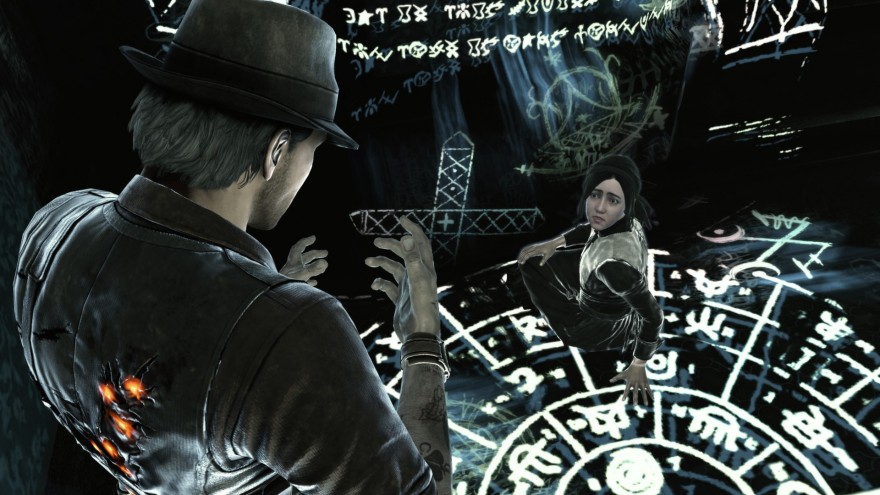 Murdered: Soul Suspect’s opening is a good encapsulation of the entire game. In it, protagonist Ronan O’Connor’s life—from a street tough growing up in a broken home to a reformed crook turned recently widowed police detective—is recounted through little vignettes and close-ups of his many tattoos overlaid with overwrought, hard-boiled narration. This sequence is a bit of Scorsese-aping character development meant to give the audience a point of reference for the story to come. It’s supposed to bring players into a high-stakes criminal world—really serious stuff.  It’s also, like the rest of the game that follows, an extraordinarily silly send-up of the kind of genre work that developers Airtight Games and Square Enix Japan are hoping to emulate in its horror-tinged murder mystery.

See, Ronan dies only a few minutes into the story. While investigating the latest lead in a string of serial murders terrorizing Salem, Massachusetts, the detective comes face-to-face with the infamous “Bell Killer” he’s hunting and is promptly thrown out a third-story window. Ronan is then shot seven times through the chest. Unlike the great Curtis Jackson, he doesn’t survive. After a few Ghost Dad-style misadventures where Ronan wakes up from his death unable to open doors or communicate with the officers at the scene of his murder, he comes to realize that he’s now a spirit who has to lay a bit of unfinished business to rest—namely, tracking down the Bell Killer who murdered him—before he can rejoin his late wife in the next world.

It’s to Soul Suspect’s credit that its developers seem to understand the inherent ridiculousness of this premise and run with it anyway. The game wastes no time in getting Ronan into the thick of what is, aside from its paranormal bent, a straightforward detective story that sees its main character—a chain-smoking ghost in an honest-to-god fedora and vest combination—teamed up with a teenaged spirit medium. The player is tasked with piecing together each step of the mystery by following clues telegraphed so clearly that Ronan comes off as a bit of a numbskull for picking up on them so slowly. The game gets away with its blend of cluelessness and absurdity mostly by virtue of how earnest its storytelling is. Soul Suspect’s plot hums along from dramatic scene to dramatic scene, always faithful that players are as surprised by plot revelations as the characters are. Ronan’s relationship with his living sidekick Joy is full of endearing melodrama and banter. It all comes together to create a tone that is confident enough to embrace its pulp fiction trappings rather than act coy about their presence in the first place.

Actually playing the game isn’t quite as engaging as the narrative, though. Ronan goes about solving his own murder by exploring the streets and buildings of Salem, picking up clues, reading minds, and hiding from the occasional demonic phantom attempting to drag him into the underworld. Soul Suspect’s gameplay follows in the footsteps of Telltale Games’ and Quantic Dream’s neo-adventures and assigns just about every one of these actions to contextual button prompts. The player ends up spending most of her time combing through levels and collecting scraps of new information by keeping an eye out for little text pop-ups. At the end of these segments they string together a series of vaguely worded clues in order to inspire an “a-ha” moment for Ronan and progress the plot.

It’s all pretty unexciting stuff, though it definitely has to be mentioned that there are a number of times where Soul Suspect (beautifully) requires the player to possess cats that can bypass obstacles like vines and air ducts, and these cats enjoy a dedicated “meow” button on the controller that serves no discernible gameplay purpose. Moments like these—ones where a bit of oddball innovation helps match the tone of the story to the actual act of playing the game—are an exception to the generally tedious nature of scanning environments for collectables.

Fortunately, Soul Suspect’s fairly uninteresting play takes a backseat to a fast-moving plot that, as predictable as it often is, remains engaging from start to finish. Airtight Games and Square Enix Japan have pulled off a difficult balancing act, never allowing the narrative to veer too far into overly serious drama or self-conscious parody. The result is something like the interactive equivalent of a throwaway mystery paperback: a bit of light entertainment that’s good fun while it lasts and decidedly nothing more.