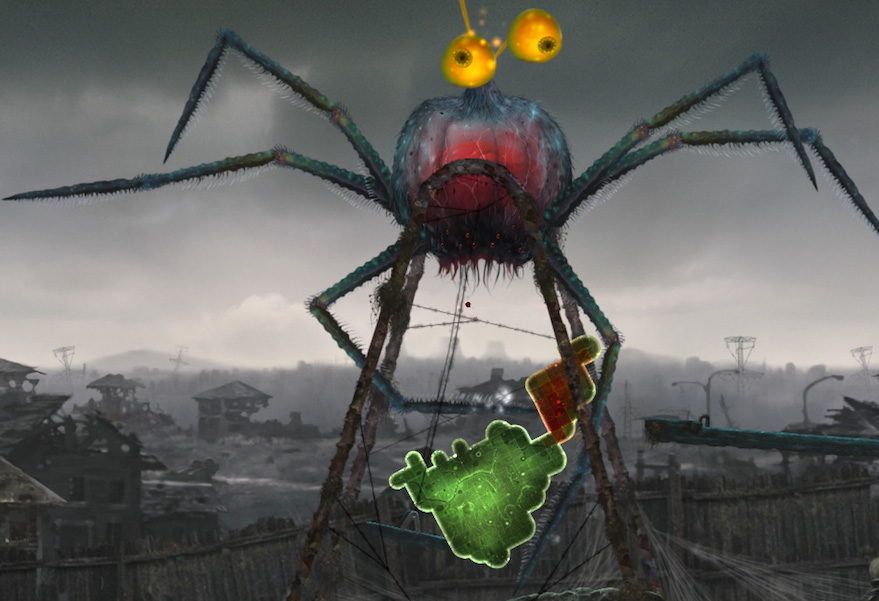 We place many narratives on the natural world. We make stories from the lion chasing the gazelle, the penguin crossing the antarctic, the salmon swimming up-river. We cast mammals, birds and insects in our own reality TV shows, scoring their exploits as if orchestral music and slow-motion film were innate representations of all life. But in reality, natural process are slow, constant, merciless. They veer wildly between the black humor of slapstick comedy and the unfeeling chance events of survival. In his study of the natural world, Charles Darwin didn’t describe millions of tragedies, he described one law alone: multiply, vary, let the strongest live and the weakest die. You only have to watch how the lion eats the gazelle after it has been caught. There is no killing blow, no dramatic death, just the slow process of consumption, one creature absorbing another by degrees.

Mushroom 11 is a game oddly in communion with these processes of nature. It is centered around an amoebic green blob, somewhere between an airbrushed B-movie monster and an anatomic illustration of a microbiological fungus. This blob can be manipulated only through its own destruction—the cells shaved off by the player’s cursor replicating themselves elsewhere. Like a sheepdog at the heels of the flock or a child with fistfulls of Silly Putty, the player must push and chide the blob into moving, stretching it across gaps or squeezing in into tunnels to emerge in a satisfying fountain elsewhere. While it is being cut away at by the cursor the blob is fluid, agile, able to scale walls and gain surprising speed, but when the player stops it becomes solid and comically brittle, prone to slowly toppling from ledges. The combination of the two captures the futility and inherent ridiculousness of a fight for survival, with mistakes leading to desperate scrambles away from deadly liquids followed by absurd pauses, as the blob becomes lodged in some unlikely arrangement, teetering on the edge of destruction.

This organic form of locomotion reinvigorates of the familiar structures of a puzzle-platformer. An exercise in restraint from its designers Untame, Mushroom 11 intelligently resists the temptation of power-ups and progression, instead choosing to wring every last possible form of manipulation from the player. The blob finds itself well-suited to adapt and survive, used to build structures, grind machines back into life, balance across precarious gaps and launch itself spectacularly from conveyer belts, minecarts and rockets. It’s this imaginative and often malicious design that makes Mushroom 11 compelling, forcing you to tackle seemingly impossible feats through ingenuity alone. Yet, like the natural process Mushroom 11 apes, there is also an inherent unfairness, an irritating randomness to these puzzles. Reliant on the unpredictable cell replication of the blob to function, the more niggly puzzles often seem to rely on things going just right over the course of tens of attempts. There are also the weird giddy moments when you squiggle through a section of difficult platforming like coke and mentos, somehow clinging onto the final edge, but these are far more rare than your blob comically plopping into purple acid after missing a tiny handhold.

That, however, is existence, and Mushroom 11, like any good Darwinian, is indifferent to your progress. It is, by turns, silly and brutal—evoking both hand-slams of irritation and chuckles of defeat. The unexpected handful of boss fights in particular have an entertainingly wobbly randomness to them, like a battle in inflatable sumo-suits that were filled to the seams with helium. But it’s also hard to love a game that, in its final stages, asks for a precision that you have little control of. What is easy to love about Mushroom 11 is its odd nihilistic bent.

Mushroom 11, like any good Darwinian, is indifferent to your progress

Perhaps one way to describe Mushroom 11’s atmosphere would be to show you this video of a lion trying to eat a baby dressed like a zebra. “That is amazing,” says the man, as a lion tries to clamp its jaws around the head of a child he is presumably related to. People are laughing, and you can see why—it is funny. But then there’s also something else: there’s the glass barrier between this happy, safe, smiling child and the predator that is, almost casually, interested in eating him. See, there’s something else going on behind the blob in Mushroom 11 too, and I literally mean behind the blob. The game’s backdrops, though initially benign, sketch out a world that gives context to the unfeeling struggle of a single amoeba. This initially by-the-numbers post-apocalyptic setting is crammed with details, jokes and references. Hidden tunnels conceal factories of genetically modified animals and empty nurseries staffed by decommissioned military robots. In one underground room a blackboard sketches out a plan for a fertilizer that seems to go off track, the final chalk marks simply saying, “Well, who wanted to live forever anyway?” It may be all rendered in the language of classic b-movie posters, radioactive neon and aging paper, but there’s a morbid atmosphere to this world, one that supports the brutal processes of natural selection. Except it isn’t natural. This is a world of people who meddled, who relied too heavily on the glass between the lion and the baby. Mushroom 11 and its amoebic hero seems to be a grand correction to that mistake, the assurance that the comic, brutal processes of life will go on, but not necessarily in the form we imagine. After all, each life is built at expense of another. You might laugh as the cartoon blob tumbles into the vat of purple acid, but your time will come too. 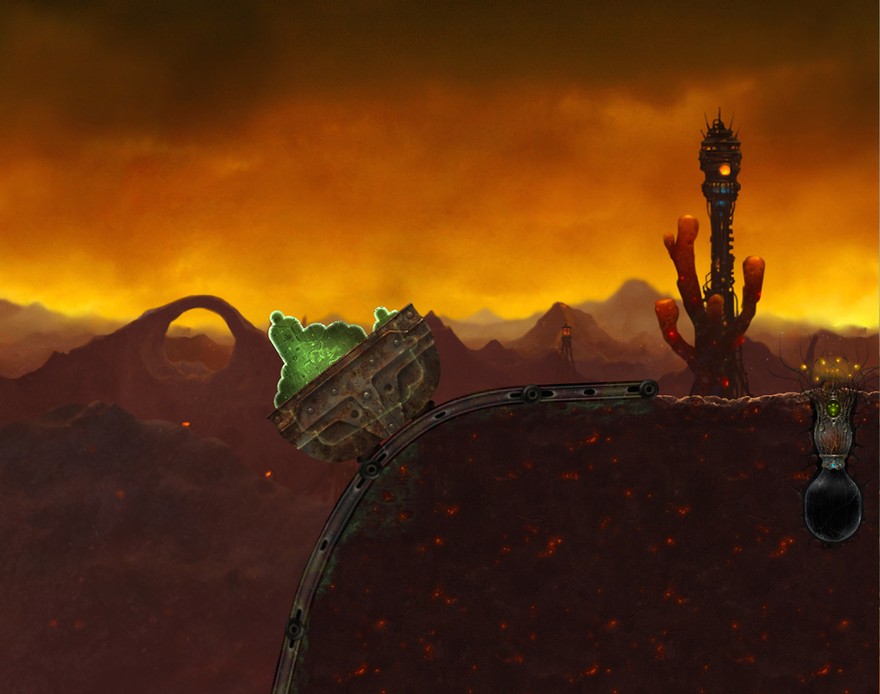