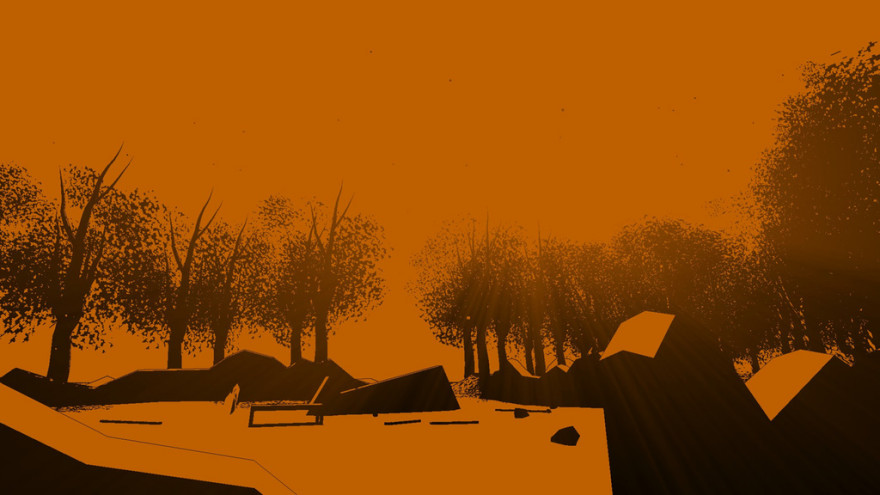 I am standing in a church with no doors.

Light filters in through flat, weird windows that obscure the outside. Yellow and black clash against each other to make up the weirdly austere possessions of the abandoned space: a solitary cone on the floor. An organ with too few keys. Candles, still burning. I know where the church is; it’s on an island that I’ve explored every inch of and am still no closer to understanding. I get the feeling that maybe the island isn’t intended for me; maybe the island isn’t even intended for the game’s characters.

The best parts of The Music Machine are easily its worlds—or, to be more precise, its spaces. Flat, monochromatic spaces that play black against red, green, orange. I punch a sequence of keys on the organ before touching some odd puff of smoke that comes out of the cone. It teleports me.

Now I’m standing before a long road that stretches away from me: out towards the angry horizon, a single black line that splits the sky and the ground. Everything is red: I am in some incompatible blend of innard-less skyscrapers, husks that stretch towards the sky and then stop, and farm-like machinery and pens containing creatures that breathe but do not move. Inside of a massive barn, an unnerving, gridded screen is the floor; an arrangement of meat-hooks is the sky: totally still, unmoving.

It’s a disturbing place, and for what it’s worth, it smells bad: inspecting the cages in the far corner elicits dialogue between a 13-year-old girl and her ghost. These are Haley and Quintin, the central characters of The Music Machine. They are the filter through which I as a player view the world. They are the ones who reveal to me that the cages smell bad; they are the ones who reveal that the not-creatures are breathing. They fill in details where the world does not, for better, or for worse.

The story is this: Haley, a child, falls in love with the lonely 34-year-old Quintin, who rejects her as being too young. “You’re a child,” he tells her as they explore the dark bricks of a basement hallway. “You talk like an adult. You’re starting to look like an adult. Maybe sometimes you think like an adult. Adults don’t run to their daddies and lie about being molested when they can’t handle rejection.”

“Daddy,” in Quintin’s words, pumped him full of lead. To enact revenge, Quintin, who is a ghost, takes control of Haley’s body, in an effort to get her killed—murdered—in the worst way possible. In a game where a floating chair hovers above a fountain and hints that it speaks to you with the voice of Satan, that this plot passes for a baseline of normalcy isn’t all that shocking. What is shocking is the game’s stark refusal to really deal with the pretty fucked-up implications of what is happening: an accusation of rape that leads to an adult male actually robbing a 13-year-old girl of her agency, and that this disturbing control is then passed on directly to the player. But the game won’t engage with this Despite the possession, Haley wishes to remain friends, even as Quintin lays out his goal:

“I’m hoping to find whoever poked those people full of holes and left them in a pile.”

We’re in the right place, the game insists. Things are unnervingly calm as I—we?—seek out our potential serial killer.

The places in The Music Machine are delightful in their existential perversity. These are the worlds we traverse: first this empty, abandoned island; later, the red place: the Farm of Pigs and Smoke, an industrial wasteland missing its industry. Against the dark inky green of the Thorn Forest, where painful, acid rains run down between pointed trees, a massive, useless structure in the middle of it. Haley reveals the agony of the rain by complaining to her puppet-master, and we duck under cover to prevent her untimely demise, and it is in places like these I am thankful for my hosts: the way in which they express aspects of worlds that are inaccessible to my senses as a player.

Yet at times they also obfuscate them. When I clicked on a skyscraper-but-not, Haley asked what, and Quintin replied: “They look like skyscrapers. They’re not, though.” I’ve seen Eraserhead, and as such, I like to pride myself on being an audience-member that can tell when something is fucked up. The giant, empty, angular structures stretched up from the ground and I lost my breath, only to choke on it later when the game assumed I hadn’t noticed. If I am Quintin, if I am the player-ghost, it doesn’t always feel like it. Even though I press the buttons to move us forward, the things which are explained are explained to me three times removed: the experience filtered through Haley filtered through Quintin and then finally delivered to me, the person who saw and clicked on it in the first place.

While I’m thankful that this doesn’t happen as often as it could—floating, glass-like spheres go uncommented and I will always love their unknown weirdness—it has an effect of lessening the game’s great amount of existential dread, the direct impact of world-based horror. I am shocked by the immediacy of a blood-covered table until Haley and Quintin comment on it, and the table is no longer meant for me as a player, but for my guides: teenaged-girl and sad-man-ghost, who assure me, the unknown watcher, that the table is freaky. As such, it’s the accents left unnoticed that work the hardest to shake me to my core: not the torture table and its dialogue prompts but the nearby keyboard, not the cages by the hooks but the silent, smoke-pumping building attached to nothing.

This isn’t to say I mind the soap operatic dialogue of teenage drama. Lines like “I don’t want to have sex with a 12 year old girl. Dying hasn’t changed that,” and “Loneliness is growing up and listing your barber as an emergency contact,” aren’t so much baseless melodrama as they are a macabre squabble in the face of utter, magical terror. Haley retorts that she is actually 13 and this is a real, pained response: that she is more grown up than Quintin thinks. Here and elsewhere, the game’s dialogue seems to intentionally aggravate its deeply troubling premise. As characters, Haley and Quintin ignore the actual gravity of the situation: the false allegations, the taking of agency. Instead, they banter back and forth—Haley calls Quintin a “meany” when he won’t let her lie down; later she asks him if he finds her reflection attractive.

At the center of this weird story is some twisted, emotional truth from the hearts of two incredibly wounded characters. But when that truth attempts to interact with the horror of a world greater than anything they’ve ever attempted to comprehend, both facades fall apart as they struggle to interact with each other and I, the player, am the one who suffers for it. It’s when the two stories diverge from each other that they reach their peaks: the drama and the horror, separate but unyielding, pelting me with empathy and fear in unspoken agreement.