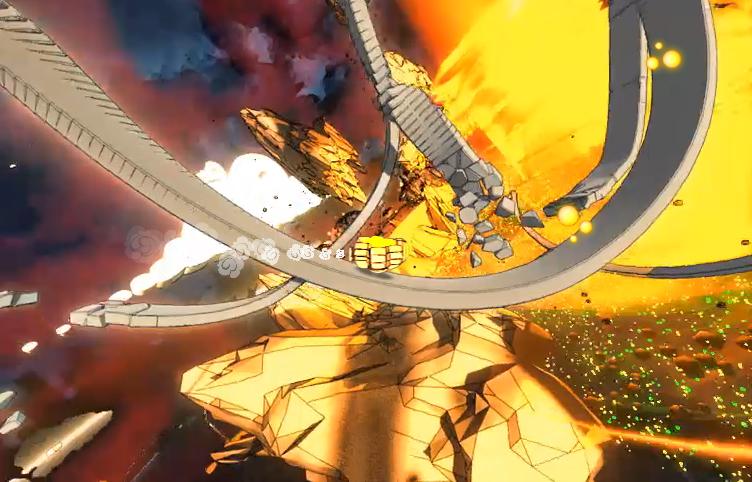 All is calm until a molten sun explodes, bursting through cel-shaded clouds, swallowing the mountainous isle in the distance. Be Reasonable, Diane is a 3D rhythm-runner set in a beauteous apocalyptic world conducted by the frustrated pleas of the folky synth-pop chorus of SPEAK‘s song of the same title.

You build a score by collecting the particles of a glowing trail that curves and bumps according to chord changes and drum patterns. But attempting to synch your movements to guitar strums is less engaging than observing how the scenery distorts as the song builds in intensity. Initially, you move underwater and then follow a track across the sky. But, like the relationship in the song, this world is a volcano of beauty that threatens to destroy itself.

a series of cataclysmic events capture the energy of the focalized, distorted percussion

When the apocalypse does arrive it sends out luminous blue and red spheres that twist and loop the track that you travel along. Confusing the 3D space in this way does a remarkable job of describing the chaos alive in the air. It also puts greater stress on your reflexes to bring out the frustration in lyrics like “Tonight I need a holiday” and “And maybe I won’t really know what to say.”

Be Reasonable, Diane is the result of a two year collaboration between two best friends: Artist and programmer Tristan Michael, and SPEAK’s writer, singer, and producer Troupe Gammage. The idea of synching a videogame to music sprang from Gammage’s mind, which is constantly spinning between videogames and music. He’s also a videogame composer of 15 years—he created the soundtrack for Mutant Mudds while on the road in between gigs.

Gammage questioned what would happen if rock music became videogame music. “Not by bending sound to fit the aesthetic of an existing game as I normally would, but by creating a game from scratch around the atmosphere and contour of the music,” he said.

Be Reasonable, Diane is Gammage’s answer to that question, but he’s not the only one to attempt to contort a videogame to instrumentation and musical swells. In fact, the most recent experiment from videogame artist and programmer Sandy Spink takes Gammage’s idea to an even more thrillingly abstract result in the videogame Castles.

Spink employs Black Atlass‘s euphoric track “Castles” as conductor for this videogame. As the lo-fi hip-hop bassline arises huge monoliths fall against a moonlit canopy punched with stars. When the pillars meet with a circular crystalline arena with you at the center, they light up as if part of a rainbow-colored synth machine. After this a series of cataclysmic events capture the energy of the focalized, distorted percussion and orchestral chord changes.

Huge spiky terrains clash with enormous, empty 3D models of planes and ribcages. At one point, you appear in a glowing red car interior and accelerate towards a cliff edge, to then move through the back of the car as it flies towards its death. The ending lets you walk down a valley towards a dramatic, ornate cathedral. Upon stepping inside, you fall beneath the game’s surface where you can look up at the bizarre underneath, falling away into the void below.

Spink takes Black Atlass’s rugged and warped texture and allows it to shred the terrains and 3D models that would usually form a virtual world. It becomes an elegant ballet of textureless art assets and ghostly dream sequences. It’s as if the music has directed its own synchronized videogame dance; cruelly deforming each component to its composition.

You can play and download Be Reasonable, Diane here. Castles can be played in your browser.