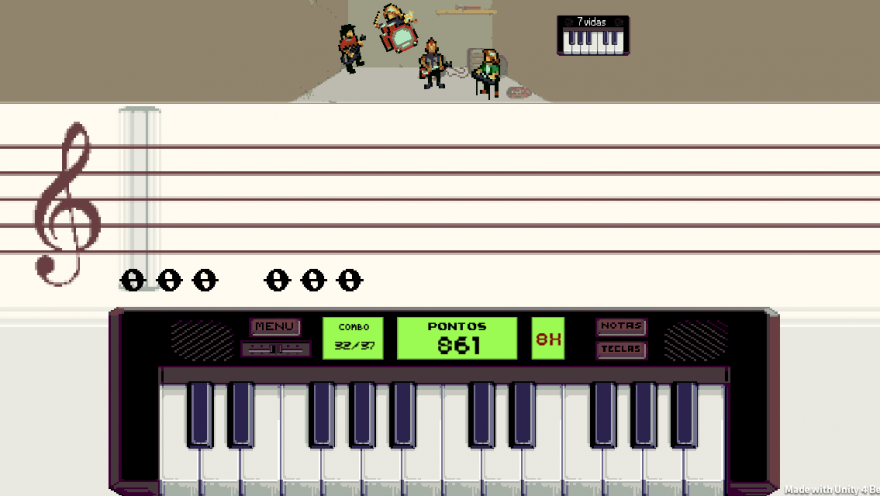 Musikinésia is a game about mastering the telekinetic powers of a dusty piano by learning how to play a real one. Not long ago, Rock Band 3 (2010) had a plastic keyboard that let players get the hang of rhythms on the piano, and Synthesia (2013) got a little closer to actually being a pack of lessons by using the whole range of a MIDI keyboard as a controller. None of them, though, teach players about music theory as Musikinésia attempts to.

“I think that, first of all, [these games] pique the person’s interest for music,” said Rogério Bordini, game and sound designer of Musikinésia. “It’s so good to play Guitar Hero, Rock Band and feel like a drummer, a guitarist. People who never got in touch with music practice have, for the first time, a kind of experience and may be motivated to study further.” Bordini’s assertion is that, even though those previous music games don’t actually teach music theory, they give players a useful notion of rhythm.

Bordini went back to Brazil after a year studying in London, and as soon as he arrived a professor came up with the idea of creating an app that would help beginners to understand the piano keys and play them correctly. The Laboratory of Learning Objects (LOA, in Portuguese), where Bordini studies, took the project and started working on a game instead. “We brainstormed and came up with this game, which would be a kind of Guitar Hero for keyboards and learning sheet music.”


The basics of the game are similar to the 00s music games: play the right notes on the right beat and score as many points as you can until the song ends. However, instead of a dark grid filled with colorful notes, Musikinésia features a white pixel-art sheet music, with a black G-clef on the left with whole notes rolling on the screen until they reach it. The sheet music is on top of an illustration of a piano, where it’s shown which keys the player is pressing and if they’re correct—it’s nearly impossible to look at it while playing without missing some beats.

The point is that these whole notes and their position on the sheet music show exactly what note is being played. The game also indicates that the line at the bottom is E, the second one up is G, and so on. “We tried to make it an accurate experience, one as close as possible of playing a real instrument,” Bordini said. “If you’re playing in an orchestra, you’ll be paying attention to the sheet music, and your fingers must be properly placed on the instrument, whether it’s a keyboard, a flute, or a violin.”

some levels include tempo variations, accidentals—sharps and flats

One of the biggest concerns that the team working on Musikinésia has is balancing this educational core with something more friendly. It’s why the game walks the line between fantasy and reality. The choice to use pixel art was also informed by this concern. But the most significant effort to draw players into what is essentially an educational game is through the story of Tom, a boy who was cleaning his house and found a dusty piano. He’d never touched a piano before, but after playing some notes he found that some objects started floating around him, as in a telekinetic phenomenon.

In order to control the power of the piano, Tom starts to study and learn how to use telekinesis through music. “There’s a level with a duck stuck on top of a tree, and Tom has to help it to get down,” Bordini said. “That’s a lame example, but after a while he seals deals with the Italian mafia and fights pirates.” The protagonist, as the player, is a layperson on the piano, which may help them to identify with Tom during the campaign. 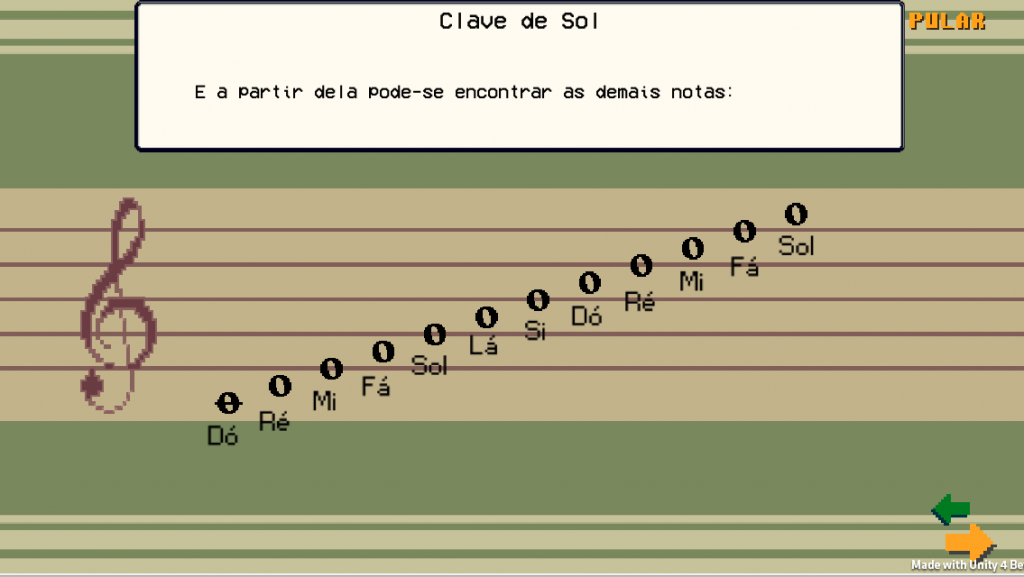 Musikinésia is made for music literacy. Even though the team at LOA believe its design is also a good fit for adults who know nothing about music theory, the game is aimed at children and teenagers at schools. Bordini’s experience with music education in Brazil and England has shown him that different countries have different approaches to the subject. In his words, music teachers in Brazil are more like general practitioners of the art. “In England, I felt this in a different way. They value it much more. There are actual music teachers in schools,” Bordini said. This is something that Bordini and his team are bearing in mind with the Portuguese and English versions of the game.

Music theory is quite extensive, but Musikinésia will help students with the basics as well as teach more complex topics in its latter levels. “We even wanted to approach harmonic fields, which is a very advanced subject in this area, but we had some issues due to limitations of the game’s interface,” explained Bordini. However, some levels include tempo variations, accidentals—sharps and flats—and the basics of chord formation, triads, and tetrads.

The team at LOA, despite being researchers, seem to be thoroughly analyzing the trends both in videogames and education to make their game accessible and understandable to everyone. “Sometimes we stick too much to the academia, to the university, we shut ourselves in there,” Bordini said. “But the more we bring this to the public, events, and schools, the more people will notice and benefit from it.”

A full version of Musikinésia is available at LOA’s website in Portuguese. If you want to play it in English, you can download an alpha version here. The full English version release date is the first quarter of 2017.