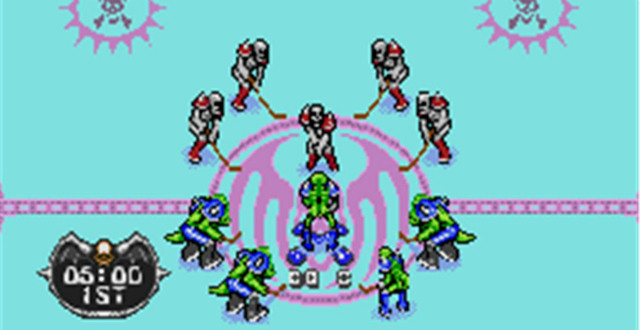 Throughout May and June, SI.com prominently featured a Sports Illustrated issue from the mid-’90s that asked whether the NHL was going to surpass the NBA—beset with labor struggles and altogether aesthetically hideous basketball—in popularity. In 2011, this is only slightly less ridiculous in its sensational prophesizing than that Rolling Stone cover that made the self-explanatory boast, “Jar Jar Superstar!” Though both the NBA and NHL finals were thrilling and highly contested, anyone who wanted to withstand any iteration of water-cooler comedy needed at least a working knowledge of what LeBron and Dirk were up to. On the other hand, the Stanley Cup Finals were the province of degenerate gamblers, people who were already puckheads, and perhaps sports fans who wanted to portray themselves as iconoclasts to their friends, but couldn’t handle soccer partisanship.

You can argue whether the NHL’s own strike derailed the actual game of momentum, or that its prevalence was never meant to be; but here’s how they really blew it: they couldn’t capitalize on how just about anyone who owned a Sega Genesis had grown up thinking that hockey was actually more fun and way cooler than basketball. Hockey had a distinct advantage over just about every other sport when condensing a proper game to a 15-minute experience, in that the exciting stuff could be exaggerated—namely, goals, checking, and fighting—and still be a fairly accurate representation of the real thing. The jettisoning of real-life strategy was minimal or not at all missed; maybe the strategic aspect of hockey is so complex that only a handful of coaches can actually implement it, or maybe they hardly do anything at all.

There had to be some awareness of the Ugly American approach to enjoying hockey—and a way to capitalize on that.

The 1993 iteration of EA Sports’ NHL series was immortalized in perhaps the one scene in Swingers that hasn’t aged quite horrifically, but an important asterisk is that it wasn’t Wayne Gretzky of the Los Angeles Kings getting his wig split open to the white meat. It was W. Gretzky, #99 of “Los Angeles,” who just so happened to wear black and silver in NHLPA Hockey ’93. In other words, the actual NHL franchises had nothing to do with the game; and when the NHL got in on the action the following year, the fighting and blood went away. (That said, the game was improved in nearly every other conceivable fashion, particularly with the groundbreaking inclusion of trade AI.)

Now, if I remember the mid-’90s correctly, Americans had racks on racks on racks of disposable income they absolutely could not wait to throw away on Genesis games and Dog’s Eye View CDs. There had to be some awareness of the Ugly American approach to enjoying hockey—and a way to capitalize on that. The bloodthirst wasn’t going away, and Electronic Arts wanted to ensure its budding Mutant League franchise wouldn’t either. And thus, Necessity gets another Mother’s Day card: Mutant League Hockey.

To say Mutant League Hockey was a precursor to the likes of NFL Blitz or NHL Hitz doesn’t really do it justice—what came later were essentially integrations of the principles popularized by NBA Jam: reduction of roster, simplification of rules, exaggerated physics. Meanwhile, Mutant League Hockey was more or less a violence game that occasionally involved hockey, albeit hockey played by trolls and skeletons and robots, who I guess really aren’t mutants to begin with. Though it imported EA’s NHL gaming engine full stop, the major draw was the choice of whether to outscore the opponent using your garden-variety one-timers or that behind-the net trick, or by simply killing them. Unsurprisingly, many chose the latter.

In fact, EA’s complicity in the matter resulted in the biggest innovation yet to come to hockey: the violence button. Even NHLPA ’93 had been operating on the same basic pass/shoot two-button system that was the standard since Nintendo’s Ice Hockey. This made Mutant League Hockey a paradoxically more complex game, and beholden to strategy: the crowd occasionally threw weapons to ice, making it a rare occurrence where they were willing participants in some sort of fracas. The rink was peppered with landmines and thin ice. You could bribe the ref, or kill the ref for taking bribes, and then wonder how they managed to find refs in the first place. Not exactly heady stuff, but by comparison, you realized that any NHL ’94 game was merely won by the team with the higher speed rating.

It’s a narrow scope, but boy is it committed: though some of the Mutant League Football franchises crossed over to this title for reasons I can’t really fathom, every team and many of the players are in some way a parody of an NHL counterpart (they take particular pride in the “Mighty Weenies”). NHL ’94’s secret shame? Mutant League Hockey’s graphics were actually way better. And really, the star of the game is your own coach, who punctuates stoppages in play with spiritedly hammy jokes, almost always about eating the other team, delivered in a porcine squawk that is undoubtedly the ugliest sound ever captured in a videogame. In yet another visual non-sequitur, the faceoffs are officiated by a top-hat-wearing skeleton that looks a hell of a lot like an off-brand knockoff of Uncle Sam. The Grateful Dead’s lawyers must’ve had more pressing issues.

You could bribe the ref, or kill the ref for taking bribes, and then wonder how they managed to find refs in the first place. Not exactly heady stuff, but by comparison, you realized that any NHL ’94 game was merely won by the team with the higher speed rating.

It was fun, wildly original, and left open the possibility for an infinite number of updates, having no tether to the NHL series’ typical yearly obligations such as AI tweaks and getting the rosters right. But there was no Mutant League Hockey 2—in fact, a planned basketball title fizzled out, and that was it for the entire series. What happened?

Perhaps the problem was that the gamer just couldn’t find much of an attachment to the game itself—had it taken more steps to emphasize certain players or the differences between trolls, robots and skeletons, or had more obvious player parodies in the manner of Mutant League Football (though K.T. Slayer was oddly less frightening than his real-life counterpart, and likely didn’t tempt his opponents with prostitutes before a game), perhaps gamers might’ve learned to cherish the St. Mucus Ooze as much as Brett Hull and Grant Fuhr. It’s not like there wasn’t some sort of franchise potential; while working at a Hollywood talent management company and trying to figure out something to pitch the Cartoon Network, it clicked: Mutant League Hockey: The Cartoon. Nearly everything that made the game such a cult classic—the irreverence, the mostly bloodless carnage, the merchandising capabilities, the complete lack of a need for continuity—was perfect for a Saturday morning.

My team loved it. Only problem was that our crack research team (unpaid interns) came to discover that someone else had already followed through on that very idea over a decade ago, and it disappeared even more quietly than the game itself. According to its Wikipedia page, the second season incorporated “more poignant stories and issues (such as Magic Johnson contracting HIV),” a claim that I will check every two weeks or so because it couldn’t possibly be true.

I won’t front like there’s some major need for the reassessment of Mutant League Hockey or even a need for a reboot, not after a year where Mortal Kombat got more knowing and galling in its ability to cater toward bloodlust and NHL 11 justified its spot as the only game in town. That said, in a climate where mastering niche catering and unearthing Clinton-era franchises is the stuff of quick promotions, at the very least, it’s worthy of relieving Mutant League Hockey from the shackles of emulators. The Pucksucker Pukes deserve better.