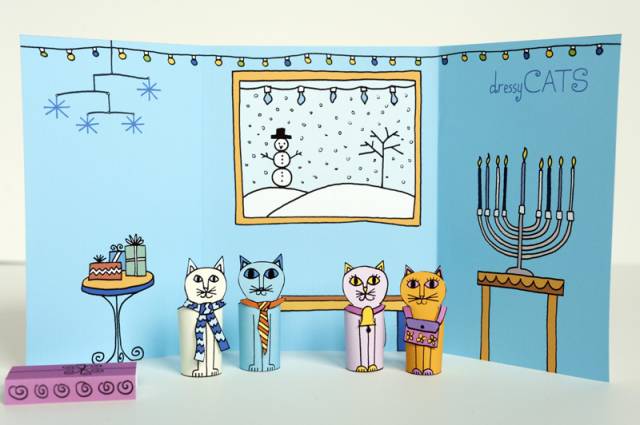 With the increasingly hypnotic glow that accompanies the consumption of digital media, games, and toys, it’s easy to lose sight of the value in designing and producing our own. Using materials found around the house, Joel Henriques designs and makes toys for his kids. He also teaches the people of the world to make their own toys on his site MadeByJoel, which got so popular that Joel put out a book, Made to Play. Actually, the site got so popular that along with appearing in countless magazines, Joel was even a guest on—drumroll, please—The Martha Stewart Show. Despite the mad press for all his resourceful toymaking, and aside from myriad craft projects that anyone can pick up on the site, I found that I still had questions for this young guru of play, based, of course, in Portland, Ore.

As an innovator of play, do you often find yourself engaged in something you call play that no one else notices?

Yeah, and sometimes I just keep things to myself. When I was a kid, on longer car rides, I’d find a water or dirt spot on the window and move my head around slightly and try to position it on objects that were zooming past the window and blast them. Actually, when I’m not the driver, I still do it sometimes. I’m sure nobody has ever noticed.

How important is it that people cultivate their own internalized world of play?

Some people might need it more than others, but I think being able to entertain yourself and focus on a fun project is very centering and fulfilling. As a kid, I would spend hours in my room playing Lego, drawing, or programming the drum machine built into my super-old-school Casio keyboard. If I ever got in trouble for anything, my mom never sent me to my room for punishment. Ha. One of the most difficult things about being a parent for me is not having much time to myself. Fortunately, my kids often like doing the same things as I do. Some of my all-time favorite moments as a dad are when I’m sitting in my art studio with my twins and we’re all happily engaged in our art projects. The energy is quiet, but very amazing.

You often design specifically for your own kids. Has this caused them to become play designers as well? Do they surprise you with ideas?

It’s amazing to watch how all kids come up with great ideas for toys and imaginative games. My kids definitely are used to making their own toys. Their projects usually involve a lot of tape and string. The thing that always surprises me is how much fun they can have with something that’s extremely simple. The other day they were “fishing” for almost an hour with a long stick, trying to poke the end of it through leaves to reel them in. I think a lot of what makes it work is that their play dialogue is always quite involved and exciting: wild and dangerous fish, pirates, maps, treasure, etc. I get lots of ideas from them.

Are your kids teaching other kids how to invent their own toys too?

I think that most all kids naturally have the desire and ability make a game or toy out of whatever materials they have on hand. But perhaps some kids, like mine, are more aware of the fact that what they just made is indeed a toy. While playing in the yard, my kids will often take a stick and or vine, and manipulate it in some simple way, and say, “Look at the toy I just made!” Whereas other kids might just think of it as playing with a stick. Both are equally awesome.

Have you thought about creating some MadeByJoel apps for the mobile platforms? Do you explore the games and other apps on the market to get a sense of what’s out there?

For sure. I’m actually in the process of starting a toy company, and I’m really looking forward to creating some iOS apps sometime. There’s a ton of fantastic stuff out there already, but most of it is done a lot differently than what I would do, so I’m looking forward to giving it a shot.

What do you think of videogames?

I mowed many lawns as a kid so I could buy a ColecoVision. I still love the classic videogames best. Centipede, Space Invaders, Joust, etc. I’ve even dabbled in designing videogames. I’m kind of fascinated by it.

I really see both as being equally important. It is critical that most kids, especially these days, develop computer skills. And of course, as computers and videogames evolve, they are becoming more and more alluring. So much so, that kids are now often starting to be underdeveloped in the skills that the arts and crafts, and non-electric toys, can provide. Cutting out paper shapes with scissors, drawing, gluing, etc. could become a lost art for new generations. And since there’s such a huge amount of money and advertisement on the electronic side, I guess that’s why I feel the need to help bring balance and show people that the non-electronic side has much play to offer as well.

When you’re engaged in something you don’t necessarily enjoy, do you turn it into play?

All the time. I used to work in a lot of coffee shops and restaurants, and when the background music played a song I didn’t like, I would bust out some very subtle dance moves behind the counter. The worse the song was, the more I would dance.

Being so conscious of play, have you noticed that adults, when doing something that they think is fun—even if it’s not play to them—are actually just playing?

Definitely. There are all kinds of interesting examples of this. For some, crunching numbers on the stats of a game is more enjoyable that the actual playing of the game itself. Or, like when discussing a game becomes more fun than watching the game. There are all kinds of blurred edges when it comes to playing and enjoying life.