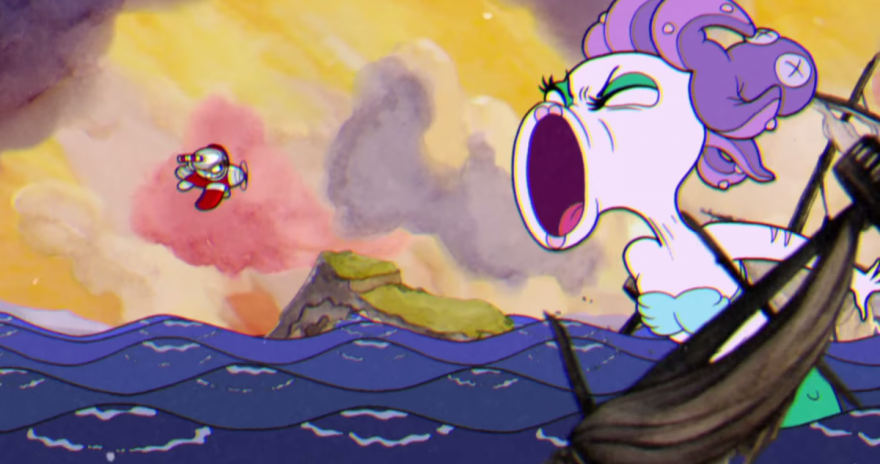 Do you remember Cuphead? I remember Cuphead, because visions of it sing me to sleep each night. The game, which combines early-20th-century animation techniques and early-90s Treasure-style shooting, has been in the works for awhile. When I talked to Chad Moldenhauer, one of the pair of brothers that forms the center of the small team working on the game, last year, he told me they have visions for a full trilogy of games in the universe. This sounds great, but mostly, the game has existed as a couple of short, dazzling trailers.

Well, here’s a whole lot more of it.

LET’S TALK BRASS TACKS. There is an aeroplane attacking a mermaid. There is a dragon. There are some ghosts on some real Swing You Sinners! shit. (watch that, if you haven’t) That a game so lovely was intended to evoke Japanese bullet-hell games always seemed a stretch, but the twirling plumes of flame in the air level do make you think of space management, perfect jumping, preciously conserved power-ups.

All the crazier, then, that this is literally a hand-crafted videogame. As I wrote last year:

Just to be clear: they’re really doing it, animating this thing with the same scrupulous, hand-wrecking intensity that teams of Disney animators used to create those swells of water in the ’30s. The process is as important as the finished project. Chad hand-draws everything, paints the backgrounds himself, and helps out on game design, which Jared handles the rest of the way. (Chad does use Photoshop to color in the characters, a single concession to reality.) Studio MDHR has grown to also include a developer, in Romania, an animator in Brooklyn, and a jazz musician, also in Ontario, who is recording all of his music via analogue means. The result is a sort of artistic time travel: “We’re trying to keep everything as if in the 30s they were making a game,” Chad says.