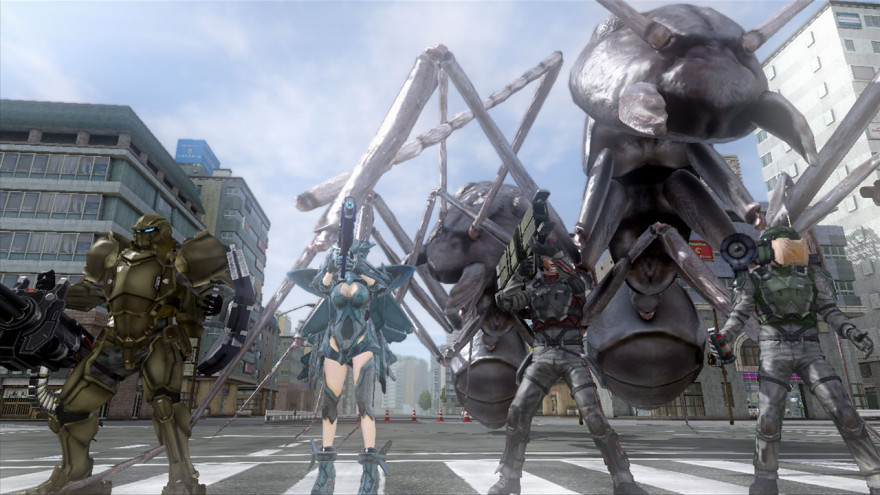 Earth Defense Force is a game about killing bugs. You might already know this about it.

For a game of absolutes—you run toward the red dots on your radar and kill them—EDF‘s virtues reside in a lot of gray area. Its big, expansive landscapes and setpieces are grand but falling apart, like a PS2 game living way above its means. The game’s narrative is both boring and pleasantly intellectable. It’s a hard game, in that it delights in the occasional gauntlet-like level and the jagged difficulty spike, but it’s also very easy, in that you know the exact way to progress. You will overcome these odds the way you have overcome all others: you’re gonna need a bigger gun. You know how to get it.

So you lace up your boots and head up the level-select menu to farm for weapons on a level you’ve already beaten. Jack up the difficulty a little and you’ll end up kitted out with a weapon that’ll cut through the swarms like they were made of meat and not thick steely alien insect carapace. Once more into the fray, in other words; you’re still only in goddamn Saigon. The bugs are still erupting out of the ground, swarming buildings, clambering by the dozen and by the hundred over each other, over humans, over cars. People are still screaming. 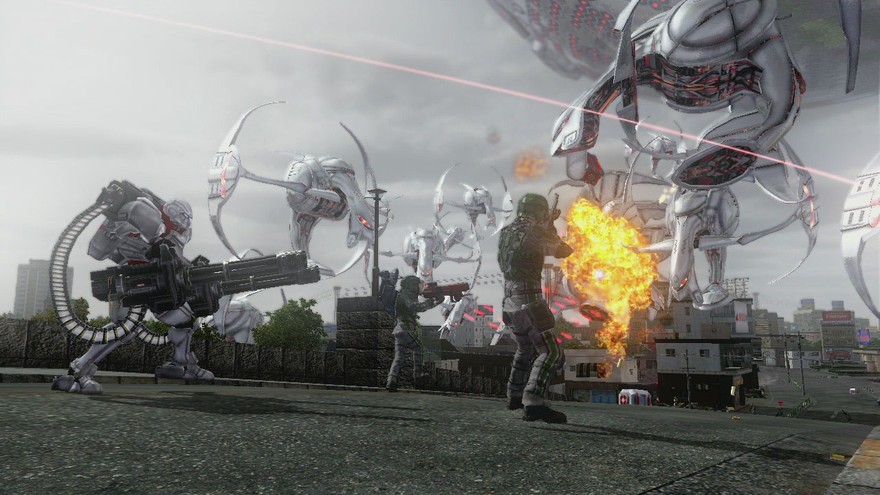 You have bugs to kill.

You know that old chestnut about how the best offense is a good defense? Earth Defense Force says: fuck that. The best defense is a good offense, it says. The best defense is an assault rifle ripping off millions of bullets from an inexhaustible supply into that crowd, leveling cityscapes in a screen-shuddering roar with rocket launchers, grenades, tanks, giant purple orbs. Earth Defense Force declares war on your very PlayStation, its sprightly vision of combat in the near-future eking onto your screen damn-near one frame at a time. In these expanded slow-motion tableaus of death we see the manic unconscious movement of the bugs, the slow malevolent stomp of the robots.

(You also have robots to kill.)

“Kill,” someone intones early on, “so we can live.” This is the mantra of the Force, its solemn prayer, its one commandment. When you and the other soldiers jog through the ruined world chanting “EDF! EDF!” —which you will do pretty regularly, and which I encourage you to do in real life as well—this koan will be the subtext of your bravado. In rare lulls the men will talk of home. “Do you have a reason to fight?” one asks. “For my wife!” another responds. But sometimes the connections misfire. “What are we fighting for?” one asks, to which another responds, “Let’s go!” In the first second of stillness after a breathless, almost Caligulan orgy of combat, in which we firebombed a city repeatedly, burning its ashes until the city itself had almost evaporated, a soldier chirps, “Did you tell her you love her?” 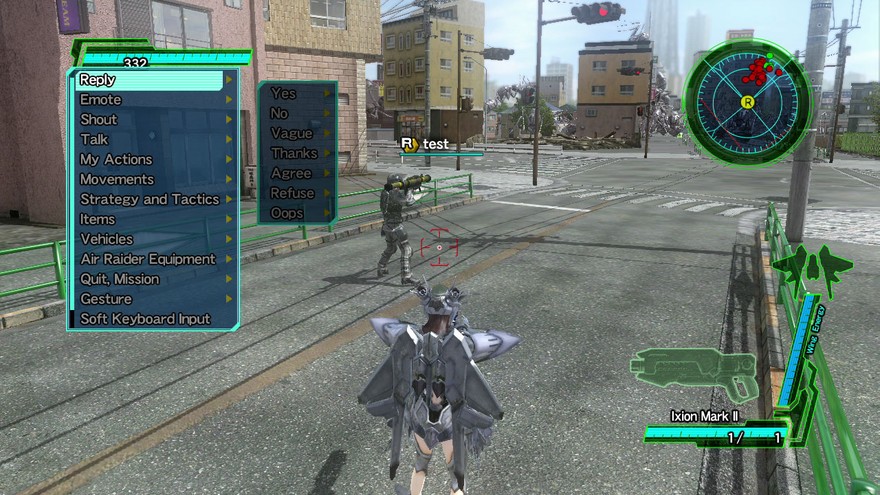 These malfunctioning niceties form a sort of mirror to the mindless paths the ants and robots take through the sky and the earth toward their deaths. “From mankind’s point of view the giant insects are just bugs, but from the Ravagers’ it’s the other way around,” your radio general muses, sage-like. Still, there is little room for relativism here; the stakes are high. When you die the game freezes the camera on your corpse but the war continues. You can watch this alternate universe play out: your men dying, the bugs chittering over them. You hear screams and clicks and explosions for awhile, and then just the clicks and growls. You see defeat.

This is not the real story. Your story is one of triumph: always, eventually, triumph. Starship Troopers looms large over the game, for obvious reasons (killing bugs = good), but also in the way it etches out a perfect argument at once for and against its own existence. You’re killing bugs because it feels good. You’re doing it because you’re told to. There is no meta flourish here, no judgment. You do as you’re told almost literally unblinkingly for the same reason you sleep or eat. Your insect brain implores it. You are here to destroy.

Your story is one of triumph: always, eventually, triumph

In the end, of course, the game is a bit of a Skinner box. It’s a game that has a net negative effect on the smell and tensile strength of your couch. It has the arc of a JRPG, which is to say that it requires one thing: time. You will get more health, with time; you will get better guns. A good JRPG keeps locked behind this time visual and thematic expansiveness, but EDF contains only ever more preposterousness, ever more bugs, and robots, and death.

Over the course of three games, hundreds of missions, thousands of guns, and billions of dead bugs, they have refined this into an unlikely aesthetic of the preposterous. Earth Defense Force proffers no defense for itself, though. Its insect brain rebukes it. Rather, this aesthetic assaults with the blank black-eyed stare of an ant. When a fog of locust-like robots descends on you in the middle of a grand, rainy field; when you unload a dozen grenades deep into a tunnel and see legs and heads of spiders come soaring back at you through the flames; when you find yourself deep underground, buried beneath a pile of bug corpses and have to shoot your way up, up through the corpses just to breathe again, up through the pile to find more things to kill—in these moments, you are face to face with this aesthetic. For some, it will be a call to serve.