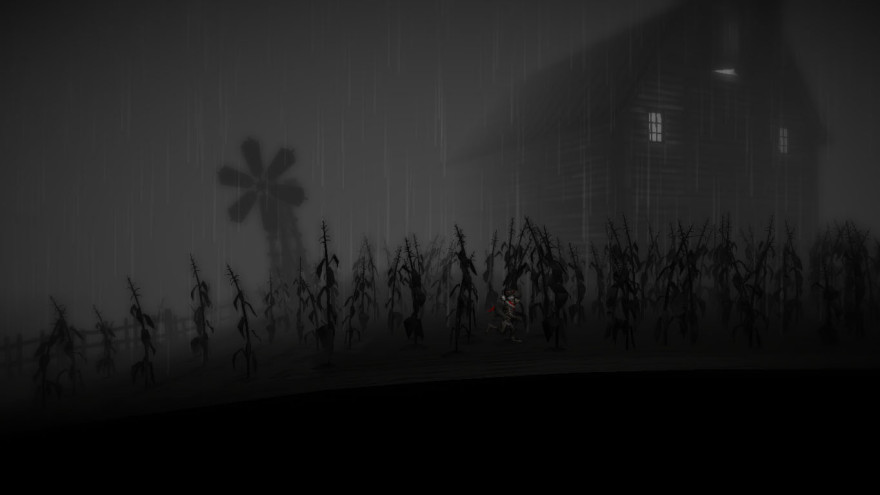 Nowhere Studios has designed Monochroma in such a way that it might keep you guessing about the plot, the main character and the setting, among other elements. A glance at the game tells you it’s set in the 1950s, in a backdrop of industrial steel, rain and splashes of red in a grayscale world.  But as you move through the puzzles and platforms of this game, questions linger, thanks to what is and isn’t there. It contains a sort of intentional vagueness in its imagery that recalls Frank Miller’s Sin City and Playdead’s Limbo, not to mention the stylings of silent films at the turn of 20th century. In a way, that vagueness makes Monochroma’s turning points explode with color, bright red and bold with surprise. And it’s that color in which you see an original tale of growing up by way of survival.

You begin as a boy running alongside your little brother, jumping and climbing over rustic stretches filled with shanties and dusty farms. Innocent curiosity—that roof isn’t dangerous, right?—leads to an accident that leads to a journey into nowhere. For hours, you carry your brother, and neither of you speak, perhaps hoping just to find help. Maybe you’re too amazed and frightened by what surrounds you—layers and layers of machinery, industrial steel that growls, grinds its teeth, stomps its feet and rejects patterns like an irregular heartbeat. It’s not as frightening as the bald man who chased you out a factory near home. What was in that factory? Who were those children? It doesn’t matter—you have to keep moving. He’s still following you, after all.

When you reach the city streets, well past the harbor and the railroads, it’s clear that something is off-color, more than ever. Everyone’s gone—from the streets, from their homes and from their jobs. What happened? Maybe the rain washed them away, just like the color of the city. Maybe the steel ate them up. It’s not clear—because there is nothing to read except advertisements with families marveling at a new invention. Music is sparse, but roaring gears and heavy rain always drown it out. But the loudest sound, even at its faintest volume, is that of crying children. Though it fades out unexplained, it’s an important warning.

The game is about leaving childhood behind—it’s a passage to adulthood, earned with hope, logic and a fear of dying. The puzzles you encounter are not like the days of playing on boxes and clotheslines near home. They put your brother in danger––whether they take the form of rising water or a conveyor belt leading to an inferno. A misstep leads to death. So does poor timing. Anxiety can be a distraction from simple logic. In contrast, a cool head can open a hidden door to safety.

Your red scarf is a reminder that you’re human, unique among the darkness.

Though the grayscale city of Monochroma is largely bereft of safety, there are signs of hope. Light comforts your little brother, who often refuses to let you put him down. Your red scarf is a reminder that you’re human, unique among the darkness that consumes most buildings and dwellings. Robots, whose eyes match the color of your scarf, help you cross obstacles and reach new heights, though it seems like even the sky is dangerous. And while there isn’t much hope anywhere, it’s enough to keep you intrigued, illuminating a seemingly endless journey to safety—to home.

Hours into the game, when the future is looking bright and polychromatic, you might not have a clue where home is, because you don’t see it, and no one is telling you where it is. At some point, when the color and music fade, you might wonder why you didn’t turn around a long time ago, with your brother slung over your shoulders. Monochroma wants you to debate your every move, to drain you of color and splash you with hope when you play well. It’s often too quiet to know if you’re doing just that.