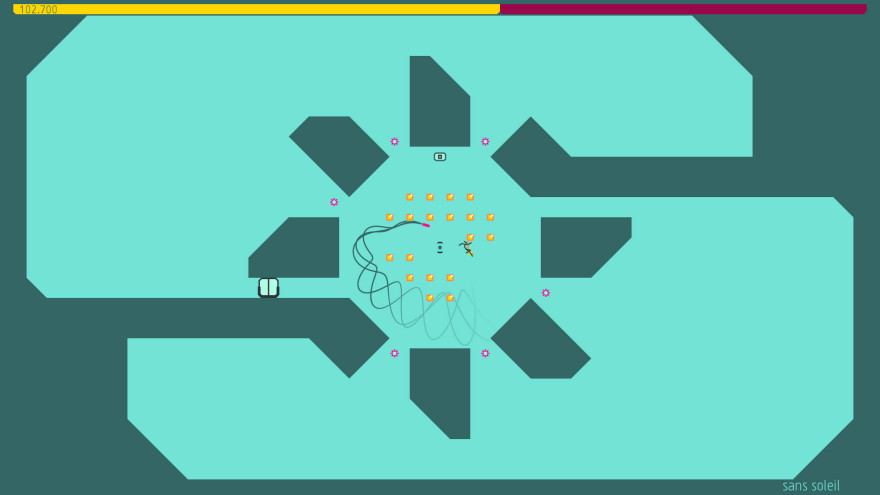 A-01 (Locations and progress)

There are three locations critical to every level in N++: the starting point, the exit, and the switch somewhere in-between (or above, or below, or off to the side) that opens the exit door. Fundamentally, every level can be broken down to this basic A to B to C progression.

There are, of course, a million different variations in hazard placement and impediments between A and B and C. Mines, homing missiles, lasers, difficult climbs, fatal falls. Given that failure is so prevalent, it is probably a good design choice that failure is so explosively entertaining and recovery is virtually immediate.

N++ is the third iteration in a well-received platformer series whose first game, N, was released as a Flash game in 2005 and was followed up by N+ in 2008 on Xbox Live Arcade. You don’t need to know this. I only know it because I looked it up for the purposes of writing this paragraph.

The previous paragraph was written for two reasons. First, to set up the expectation that the developers behind N++ should know what they’re doing by now, and second, to suggest a resonance with iteration as the basic strategy N++ uses to teach players about itself.

A-03 (Challenge, mastery, and boredom)

In A Theory of Fun for Game Design, Raph Koster ascribes most of the pleasure of playing videogames to the process of learning and mastering novel systems. Both of these elements are necessary to sustained enjoyable engagement, as mastery is responsible for the endorphin release associated with pleasure, but once improvement is no longer possible, boredom tends to set in.

The tutorial stage in N++ is extensive. The game, after all, has a lot to teach the player about its systems, one item at a time, one screen at a time, over 125 screens in 25 “Intro” levels. The player can, however, jump out of the “Intro” levels and into the “Solo,” “Legacy,” or multiplayer levels whenever they get bored with the tutorial, and return if and when they find it difficult to master a challenge in the main sequence levels.

A-04 (There is no progress without a destination)

There is a certain telos to the platformer, a process of movement bound up in a particular path to a determined destination through a specific set of obstacles. Similarly, iteration tends to be bound to sequence, starting with relative simplicity and slowly building complexity or variation through a regular series of modifications.

N++ both utilizes and very quietly subverts this basic set of expectations. You can detour within a level and face a few extra challenges for a few extra rewards. There is the path, but you are not bound to it. You may introduce more or less complexity into the iteration as you prefer and it still remains recognizable as an iteration. 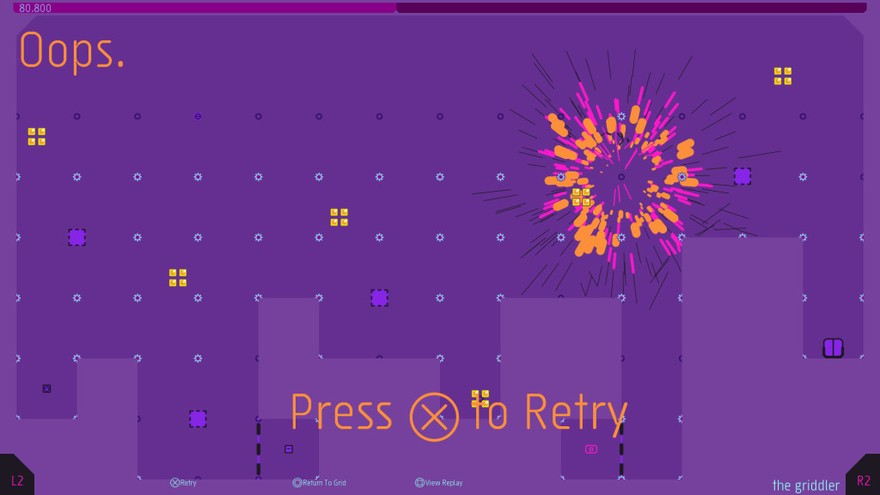 The first TV I used to play videogames at home was maybe a ten- or twelve-inch cathode ray tube color TV. I don’t remember much about it except for the material feel of the push-pull on/off switch. I played N++ on a flatscreen TV with a viewable area increased by more than a factor of 10.

Most of the visual elements of N++ would have been at home on that old CRT next to Super Mario Bros. or even Joust. This is not to say that N++ is a throwback game, or an experience primarily commendable as an exercise in nostalgia.

a throwback to the twitch platformers of old

Movement in N++ is both precise and inertial in a way that feels very modern—that is, processor-intense—rather than old-fashioned. Mario may have slid to a stop when the player pushed backwards on the direction pad in the middle of a run, but it was a comparatively set distance, based a three tier (stand/walk/run) system of lateral movement speed.

In N++, on the other hand, movement is actively attuned to controller input to an extent that was simply not possible for Mario’s 8-bit processor or controller. While the player icon in N++ is a humanoid stick figure, I feel compelled to compare movement in N++ to games more like Gran Turismo than Mario—a constant, delicate, well-tuned process of power acceleration and braking. As a result, N++ is not just a game of timing and reflexes, a throwback to the twitch platformers of old, it is a game of finesse.

There is one graphical element in N++ that really seems to necessitate the power of a system like the PS4. When mines detonate they send out a mass of shards, frequently setting off other mines and resulting in a cascade of explosions to mark the player’s demise. It’s entertaining, but it’s also functionally peripheral. Most players will soon find themselves skipping the fireworks to restart the level and try again.

What really makes N++ noteworthy is not the demands it makes on the PS4’s processor, but the way it utilizes the size of modern screens.

Levels in N++ do not scroll vertically or horizontally. They all take place on a single screen.

That is to say that every level is viewable in its entirety at the very beginning, and a critical part of gameplay is the time that the player takes to assess the static level and planning a path before pressing X and setting the screen in motion. This also means that each level exists as a distinct and coherent whole to be encompassed and erased. Not so much a story in movement as a series of digital mandalas to be erased by the player one by one.

Time starts, exists, and ends, in spaces that are different and the same. The sameness and the differences are the blocks from which the world is built, a few minutes at a time.

And then is built again by the player, a little faster, a little better, and held in existence just a little bit longer than last time, before the inevitable end.