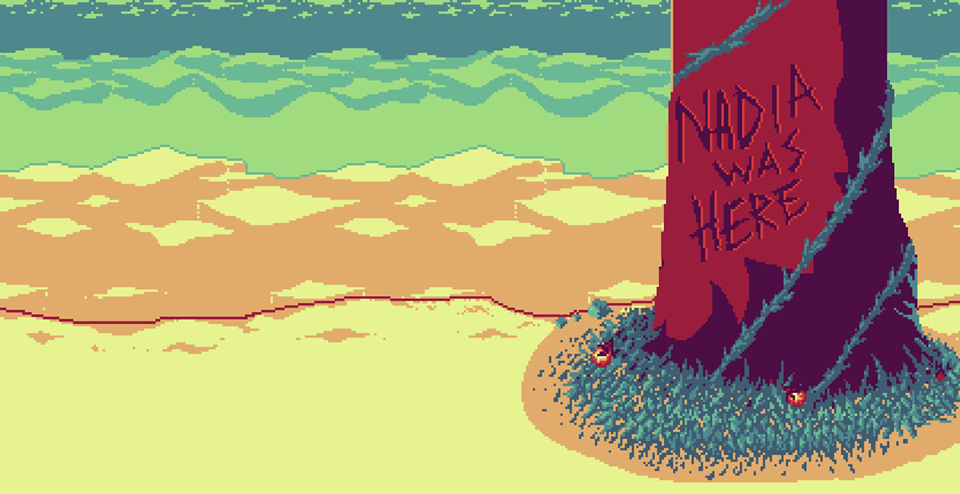 It would be easy to mistake Nadia Was Here for just another 8-bit indie RPG looking to inspire some nostalgia in players longing for the good old days. It has all of the hallmarks of those NES classics; a trio consisting of the warrior, the mage, and a thief—here named Nadia—trying to save their world from some sort of disaster.

“I stuck to the pixel art style because in games of that art era, you get your destiny and legacy handed to you at the start of the game,” Joep Aben, the game’s creator, told me. “The characters in those games have no real reason to start their quest other than being chosen, and that’s completely different in this game. The characters don’t have real goals in the start of the game, and have to find it during the game, which is how life is. You have to find your destiny and what you want to have accomplished at the end of your life. It’s not handed to you.”

Complicating this is the fact that, in Nadia Was Here, the world only exists for a hundred years at a time before it resets and starts over again. Nadia presents a world without progress, where all traces of effort and existence are eventually erased, and characters are plagued by existentialism and ennui. The game asks: If nothing will matter, why bother doing anything?

“The game is really about legacy,” Joep says, “and how to live in a world that will forget you eventually, and how to deal with that.” It is an issue that he takes very personally, and in making Nadia, it is one he faces directly. “I want to do stuff or make stuff that has an impact on the world. It’s really scary that at the end of it all you probably won’t be remembered.”

But there’s a strangeness here: Aben has told that seemingly desperate story through a group of characters, and by virtue of being a group they have already made some sort of impression, if only on each other. But Aben says that the interaction between the characters is the most important part of the story. “You can’t get the answers you’re looking for by being alone. You have to talk with people and experience things with people, and … grow through each other, which is kind of Nadia’s whole point.” He explained how a group dynamic is essential to the development of the characters and story: “She causes the change in the other characters, which causes the change in her. She thinks she’s not worth much, and the way that she indirectly helps the other characters grow is how she grows in the end.”

It’s really scary that at the end of it all you probably won’t be remembered.

I started to get the weird impression that—despite the game’s built-in existential crisis and its subdued palette of aging photography—Nadia Was Here was ultimately optimistic. Aben agrees.

“Nadia is about discovering that there are so many opportunities to leave your mark,” he says. “ Not by big things; that’s important. You don’t change the world through big things by saving it, by doing something really heroic … It’s about how just trying and doing little things can have a huge impact, and not being scared to do stuff.”

Joep Aben is still working on Nadia Was Here and plans for a release this winter, but if you’re interested in exploring his world on the edge of repetition, you can download a demo on hissite.