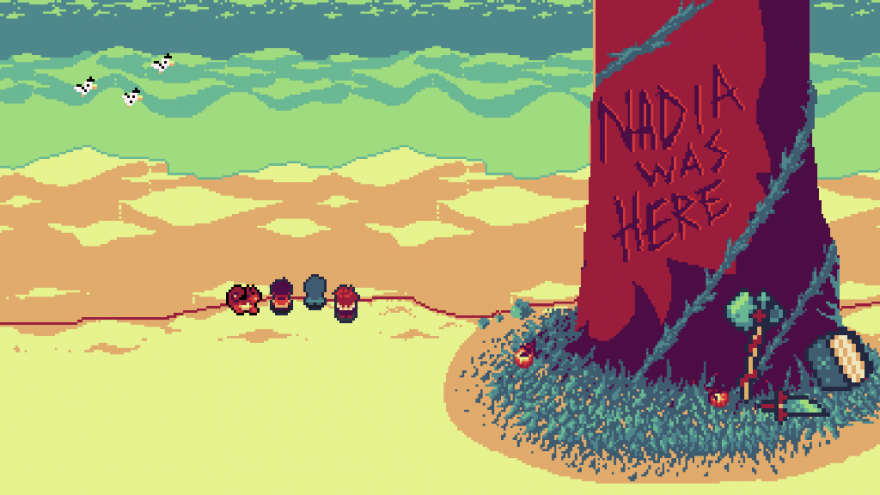 I’ll be honest: if the world imploded in a deadly apocalypse every 100 years without fail, I would probably live my life beneath my bedsheets, refusing to do any work or, actually, anything at all. Any mark I’d make on the world would be erased with my existence, so what’s the point in getting out of bed? Nonetheless, this is the premise of Nadia Was Here, a pixelated RPG in the style of the classic 8- and 16-bit eras, and which is currently on Kickstarter. It’s an RPG that seeks to explore themes of ennui, finality, and that desperate, human desire to be remembered across time, fueled by the hope that even the smallest actions can have a big impact on the world.

Created by Netherlands-based artist Joep Aben, Nadia Was Here takes place in the magical world of Amytah, where the land and its citizens are stuck in a time loop, forced to lose their history and memories, and thus rebuild from scratch every century. The story takes place in the final year before Amytah once again reverts to the beginning, and you play as three characters: an old and mildly egotistical warrior named Hogan, a mage named Tereshan who carries a dark past and scaredy-cat tendencies, and the eponymous Nadia who is a thief that believes life has no meaning but wants to change hers anyway.

Each character presents their own story depending on your actions in the game, and their charming character designs have me fawning over Nadia already. Not only that, Aytah is a visually stunning world for an 8-bit game, and its people are painted with an unusual, muted color palette that’s gentle on the eyes and gives the game a warm, vintage feel.

The game provides a point-and-click turned-based RPG fighting system where you have to keep repositioning the three main characters throughout each battle in order to optimally destroy an enemy. Depending on your party’s Energy bar, your characters’ strengths increase, and they can even summon creatures to their aid. According to Aben, you don’t need to grind, as there is no level-up system and battles can be avoided. Instead, your characters grow stronger by learning (or buying) new and more powerful skills and further by employing the appropriate weapons most effective against certain enemies.

Nadia Was Here and its characters struggling to establish a legacy, even in a world that may very well forget they ever existed, might just inspire you to jump out from under your bedsheets and make a mark of your own. Find out if that’s the case sooner rather than later by downloading the demo.

Nadia Was Here is currently up on Kickstarter, and if funded, will be released in November this year. Check out the Kickstarter here.