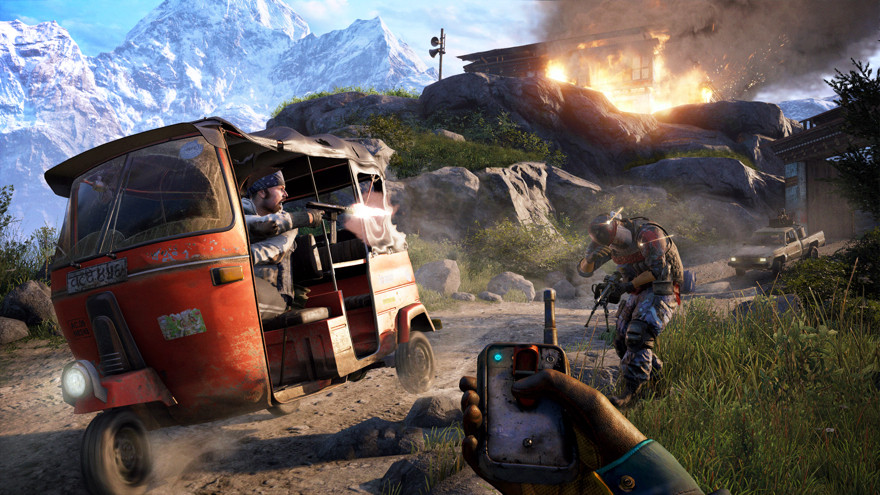 There’s a bit of internal controversy, as Far Cry 4 gets started, over the name of the protagonist. First addressed, somewhat uncertainly, as “Mr. Ghale” (spelled with a silent H and rhyming with “fail”) on a recorded message by an American State Department official advising against travel in the small Himalayan nation of Kyrat, the young man is soon kidnapped by the local despot who insists on calling him AH-jay GAH-lay. I initially interpreted the single syllable version of the last name to be the error of an indifferent bureaucrat, a nod by the game to the way it can seem that the single effective purpose of the low level official functionary is to mangle every name they encounter. As Ajay escapes from the despot, Pagan Min, and begins to explore Kyrat with the help of the resistance, The Golden Path, his last name is pronounced almost universally with two syllables, his first name with a soft, extended long A rather than sharper, more traditionally American long A as pronounced in say, The Fonz’s monosyllable catchphrase. It’s a nice little joke until it’s revealed, on one of the rare occasions when Ajay says his own name, that he pronounces it as a single syllable, exactly the same as the man from the State Department.

I tried to figure out, as Ajay meets a pair of Western con artist backpackers and, later, Pagan Min’s military commander who addresses him as “A.J. Gale,” what exactly the variety of pronunciations were trying to signify. For the hours and hours of recorded dialog, there’s actually not that much to go on. Of the six non-player characters who use what I’m going to call the American pronunciation, five (including the State Department bureaucrat) are foreigners in Kyrat, and there doesn’t seem to be a great deal of intention on their part. The one Kyrati who uses the American pronunciation seems to be the only character doing so for a reason—to deny the Kyrati heritage the game’s story foists upon Ajay, and attempt to undermine the despot’s seemingly inexplicable fondness for this outsider.

I might be inclined, if the whole thing didn’t seem so incidental, to try and figure out whether Far Cry 4 was trying to make a statement about how identities are adopted and adapted, the transition between being a tourist and becoming a member of a community, or even the way in which being misnamed leaves traces—scars—on our own construction of ourselves. Is Ajay’s own pronunciation the mark of the tension between the generations of an immigrant family in the U.S.? (We’re never told anything about Ajay’s life before the beginning of the game, and it is never revealed whether Ajay’s mother—whose death precipitates his return to Kyrat—pronounces her last name or his with two syllables or one.) Is Ajay’s continued use of the American pronunciation a sign of his resistance to revolutionary role that so many of the people around him seem desperate for him to fulfill? (It seems unlikely. In Ajay’s pre-recorded dialog, he seems to agree to just about anything anyone asks him to do, sometimes leading with “I’m in” even before the player is asked whether to pursue or decline a particular choice.)

But, as persistent as the disparate pronunciations may be—no character ever alters their pronunciation, and Ajay never corrects anyone or insists except in his own habits on a particular pronunciation—Ajay’s role in the story disrupts most possible interpretations. Most of the characters who use the American pronunciation are outsiders, not just non-Kyrati, but incidental to the primary campaign storyline. They are side-quest characters or optional characters for multiplayer co-op use. This might incline a reading of the American pronunciation toward an indication of comic status, marking the characters ignorant or uninterested in the struggle that is supposed to motivate the action of the story, except that Ajay himself is marked in the same way. There isn’t even room to seriously entertain the possibility that Ajay himself is meant to operate as the fool. Too much energy is expended by the narrative in establishing its own stakes. Ajay Ghale is the son of a great, if imperfect man, and all indications are that Far Cry 4 sees itself as asking the player to perform great, if imperfect actions.

Except—and this is where Far Cry 4 finally reveals what it’s really up to—however inflated its stakes, however serious or seriously unserious it may want to be taken, whatever its successes and failures as adventure, tragedy or tragicomedy, Far Cry 4’s primary storyline is itself incidental. If the player so wishes, Ajay can abandon Kyrat’s civil war and spend his time bow hunting, or go on a pilgrimage to Kyrati religious shrines. He can spend his time swimming or boating. He can become a reality film star as a survivalist or race driver. He can remove himself from Kyrati politics and devote himself to pure combat in a gladiatorial arena. And all of this is available in the single-player world—a wealth of distractions even for players uninterested in ignoring story-dictated play through the normal multiplayer options.

Where Far Cry 4 offers choices, they are almost universally bad. Whichever faction Ajay supports, disaster is inevitable, a cycle not so much of violence begetting violence, but of intergenerational lack of imagination gussied up in someone’s not terribly well researched idea of the forms of reincarnation and eternal ongoing total crap. In my playthrough, I saved ancient religious statues from destruction by Pagan Min’s regime only to later blow up a temple at the behest of one faction of The Golden Path. I killed and skinned endangered animals to use their skin to make bags to carry more stuff. I shot a hostage in the head with a sniper rifle after killing his captors because I didn’t realize that he was a hostage. I lost a bit of karma for that, I’m pretty sure. Mechanically, killing innocents costs you karma points, but at that moment I didn’t actually notice. I wasn’t especially busy or distracted, but if you’re not watching that corner of the screen at that particular moment, there’s not really much of an additional impact.

We’ve adopted the sandbox as the metaphor we use to describe big-budget open world games, but it’s just as apt to describe them as digital theme parks. For $60, they put us in the middle of an imaginary space where we can play a part in a story or just go for a ride but in which we are perpetually insulated from the impact of our activities and no matter what we choose to do we are never for an instant allowed to be bored.

When Ajay Ghale mispronounces his own name it is not because he is alienated from his culture and identity. It is not because he is an outsider in the land of his birth, or even because he is a product of assimilation, the ultimate American. Ajay is not a visitor out of his depth in a place he doesn’t understand and can’t even really see. Ajay is a participatory spectator in an environment staged for his benefit, a dress-up game where it doesn’t really matter if he actually learned his lines. Ajay, after all, is the paying customer, the center of attention, assigned a role as son of a great man, beloved by insurgent and despot alike. Or not, if he chooses otherwise. It doesn’t much matter. He can take some time off if it gets to be too much, and do something else for a while. Everyone is on his clock. Just as Ajay himself is on ours.

As adventure park, Far Cry 4 performs admirably well. There are ample opportunities and excuses to do within its bounds whatever it is you want to do. The particular darkness of its narrative might be a bit more basic cable than HBO, but there are other parks if that’s not your sort of thing. This is the kind of place where even your enemies love you, as long as you say yes to everything. That’s the price of admission. Well, that and $60.