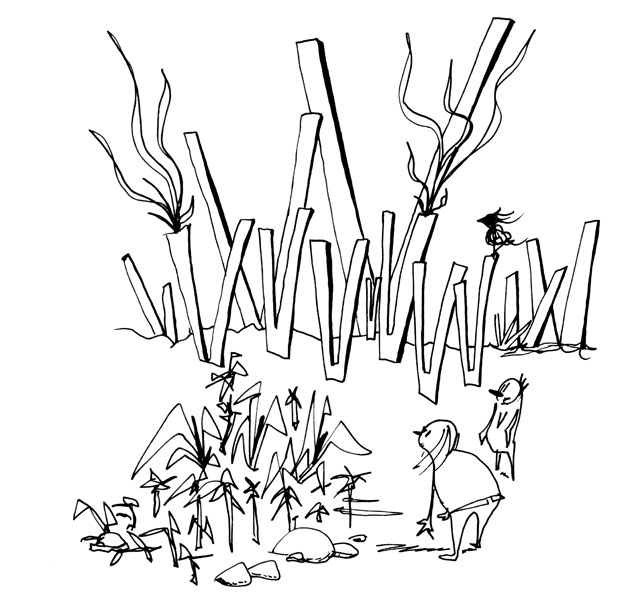 In the 1990s a small movement of musicians intentionally made their bands’ names hard to pronounce and hard to search for. This meant using only punctuation (!!!), a combination of letters and numbers (3OH!3), only symbols (Prince’s logo), or only consonants (MSTRKRFT). The deflective nature of these titles would conveniently backfire into useful publicity. It was DIY marketing through original band names and it now seems like a quaint past practice.

That’s not to say that this was purely a profile-boosting exercise. The variously attributed quote that “writing about music is like dancing about architecture” has a say here. Sometimes, especially for a band, 26 letters of the alphabet aren’t enough to convey that unique … uniqueness that you’ve been working so hard on. Take into account the number of conventionally named bands that have come before, with their definite articles and their First Name and the Nouns, and it’s no wonder that finding an original name can feel like such a task. Inevitably, in our technological age, bands have turned to computers, and specifically their keyboards, for help.

Punctuation and symbols are seen every day, but they’re only the furniture on which the language sits. Our eyes skim across commas and hyphens without thinking, because we understand their usage and meaning, only noticing when they are misplaced or missing. Words, however, have unpredictable baggage and associations that we all bring to them. Hear an artist’s name before you experience their music, and you’ll probably make an assumption about the style they’re aiming for; the Beach Boys were smart to imply surf rock, but Bloc Party’s smug combination of hip-hop culture and post-Soviet politics doesn’t relate to its output. Copy a naming structure and you’ll confuse your potential audience; for a while, inexplicably, My Bloody Valentine and My Chemical Romance were absolutely interchangeable in my teenage mind.

The indie hit VVVVVV is a perfect example of a game that seems to have taken influence from this naming dilemma, and done it successfully.

Let’s get that name out of the way; is it vee-vee-vee-vee-vee-vee; vee; the-letter-vee-six-times; or something else entirely? The first seems like the obvious choice, but creator Terry Cavanagh uses the second, and the game’s website suggests the third.  Interestingly, Cavanagh says he was surprised that the name and its pronunciation were a “non-issue,” but there must be an argument that it made some impression. For writers, readers, and players, it must have stood out slightly more than its contemporaries; a hook just asking for someone to bite.

An unrevealed acronym like VVVVVV carries none of the baggage that comes with actual words. To some it might have hand luggage—a suggestion of, “Huh, pretentious indie art game”—but as a small title with no marketing budget with which to shape expectations, it’s an acceptable compromise. Call of Duty and Medal of Honor, once, were given titles that alluded to the nobility of fighting in a relatively just war, and to a large extent tried to convey that nobility in their original forms. I would suggest that neither series can claim the same today. Firstly, because of the sensitive nature of the conflicts they represent: wars that haven’t finished, or thinly fictionalized versions of them. Secondly, because success warps the importance of a names: eventually they don’t matter because they have been transcended by the creation. Bands, movies, even children all grow into their names. The longer they’ve been around, the more appropriate they seem.

The name you’ve given your creation should probably be obvious in retrospect. In this sense, VVVVVV is a success. Kieron Gillen, while recommending the game, described a journalist’s frustration at such acronymic titles as VVVVVV and S.T.A.L.K.E.R.; but I’d argue that it’s rather smart, and much more useful than a traditional title like “Captain Viridian and the Fifth Dimension.”

With this in mind, Cavanagh’s choice of title is seriously impressive, and perhaps a little fortunate to be so neat.

?VVVVVV hides its flipping mechanic in plain sight with that repeated letter V. Viridian’s navigation of the world sees him thrown from floor to ceiling and back again, over and over. His forward momentum (although you’ll move in all directions) completes the tracing of this wave.

The game’s characters recognize that the dimension they’ve found themselves in is a strange one. VVVVVV, at first confusing, then explored and understood, represents the alien nature of the world, as well as being the name given to the dimension itself. Using Roman numerals, this might suggest that Viridian has found himself in the fifth dimension, the first of the hypothetical dimensions beyond the traditional four.

The five other crew members of Viridian’s ship also have colorful names beginning with V, which alludes to some impressive thesaurus consulting: Violet, Victoria, Vermillion, Vitellary, and Verdigris. Locating each is the game’s main objective.

With this in mind, Cavanagh’s choice of title is seriously impressive, and perhaps a little fortunate to be so neat. While at first leaving everything to the imagination, on reflection VVVVVV refers to the game’s mechanics, setting, subjects, and objectives.

VVVVVV is more than a game with a strange name; it’s an excellent homage to the fiendishly difficult 8-bit games of the past, a crisp blur of bright foregrounds and nostalgic chiptunes. But the title is a necessary part of this construction, one that lets the game speak for itself.