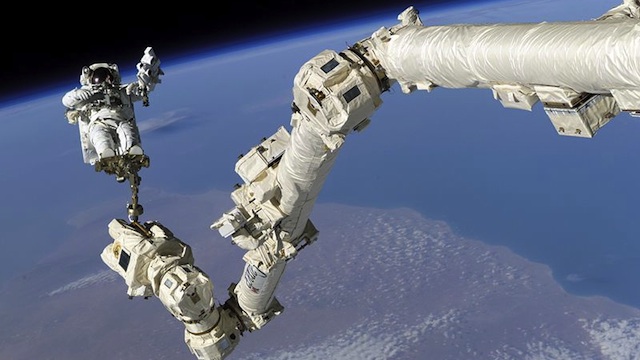 On a hot, muggy Sunday in Teresina, Brazil, a group of dark-headed, unshaven young Brazilians had gathered in a noisy conference room at Sertão Games Headquarters, located on “the only currently inhabited planet in the universe,” at least according to the directions on their webpage. They had assembled to show off the games they had spent the weekend creating.

Among the crowd were Ramon Melo, Angela Pereira, and Luciano Rocha, members of the winning team of the South American arm of NASA’s Dark Side of the Jam game jam. Luciano was still wearing his Lynyrd Skynyrd t-shirt when he introduced their game CanadArm, a simulation of the lanky mechanical arm used IRL to service satellites and space stations.

Though Maze War, the forerunner to the first-person shooter, was created by an intern at NASA in 1973, the national space administration has been traditionally too busy for games. However, the aughts were unkind to NASA, marked by a gutted space budget, the suspension of manned spaceflight, and the privatization of shuttle launches. The iconic corporation that put an astronaut on the moon and a robotic rover on Mars was in trouble. They reasoned that a waning public interest in space was responsible. (A text adventure from the jam called Split considers an anti-intellectual future where Martians call on Earth but nobody cares.) So, NASA went social. Curiosity became the lovable, WALL-E-esque robot that tweeted from the red planet to earthlings. A plush canary was sent on a rocket into orbit to promote Angry Birds Space.

Then, NASA held this game jam. Game developers big and small were invited to crash at the Ames Research Center in Silicon Valley, listen to researchers talk on small satellites and astrophysical concepts, and build a game about space in forty-eight hours. Those who couldn’t make it to California, like the CanadArm team, jammed at universities and studios closer to home. But wherever they were, it was important not to sleep. Angela got six hours shut eye, Luciano managed six and a half, and Ramon lucked into seven, though there was still enough time for a few matches of ping pong.

A lot of the entires are rough sketches, as we should expect of games that were crash-programmed by dudes that hadn’t slept a wink. But where they lack spit-shine, the games have an abundance of scientific fact. They contain realistically modeled moon buggies (Moon Douchebags), sound bites from Apollo 11 (Apollo 11: The Remake), and photos of the surface of the moon (E.R.C.K.). What I took away from them is that while controlling a rover (The Surface of Mars) or piloting a space probe (Spaceal Latency) may look similar to playing a videogame, logistically, it is much, much tougher.

The best of the lot, like CanadArm, play with this tension between remaining true to the source material and creating a fun experience. Maneuvering the bendable arm requires such determination and awkward execution that it feels like the most cruel and unusual crane game imaginable—a space-nerd’s retelling of troll games like Bennett Foddy’s GIRP. The player frantically switches between four different perspectives, fumbling with seven or eight points of articulation, in order to repair a telescope before a timer ticks down. I’m pretty terrible at it, and it doesn’t sound like the guys who made it are great either. “It tends to be a difficult game, I must admit,” Ramon says, “but over time you understand how to maneuver the arm. Personally, as lead programmer, I move it a little better.”

At first, the team had wanted to make a game about the ever-popular Mars rover, but everyone else was already doing that, and the mechanics didn’t seem realistic enough. So, they kept looking. Then, they “found an amazing resource about astronaut training, and ideas were flying all over the place,” says Angela. “The player would have to master abilities like walking in microgravity, piloting a space shuttle, and controlling a robotic arm.” There wasn’t enough time to put all of that in, of course, but the NASA jam seems to have served its purpose: to get people excited about space.