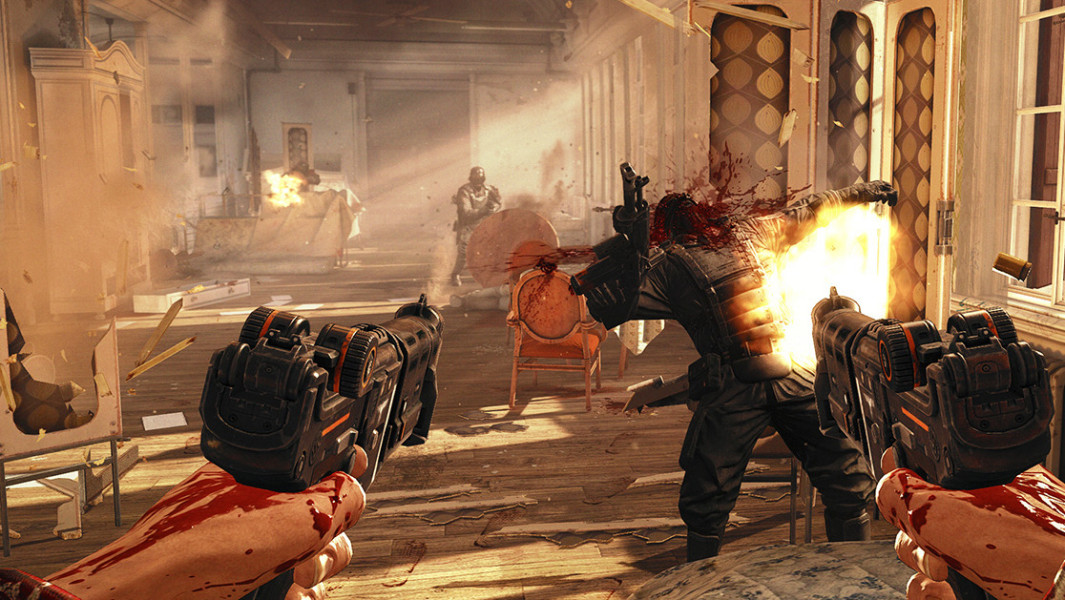 4:17 P.M. I was daydreaming. In the cockpit. Staring off at the horizon off to the side of the plane. Reckless behavior, to be sure, but not as reckless as the souls who Kamikaze into us. That’ll wake a fella up, and it certainly did. Fortunately, I’ve got my wingman at the controls, who doesn’t mind pulling double duty while me, Sgt. Blazkowicz, was doing something decidedly non-sergeant-like: standing behind his co-pilot seat, napping like a horse in a stable. DEATH TOLL: 2

4:20 P.M. Time to wake up and tend to the business at hand. I slide down to the plane’s turret and start gunning down ships. It’s chaos. I can’t tell our allies from our enemies, so I blast away at everything. Who they are or what they did to me… I can’t say. DEATH TOLL: 7

4:32 P.M. Our plane can’t take anymore. We sink. I swim to another sunk plane to commandeer its turret to stave off two robot dogs. My allies call them “mechanical beasts.” The enemy calls them kampfhunds. But to me, they’ll always be robot dogs. And dead. DEATH TOLL: 13 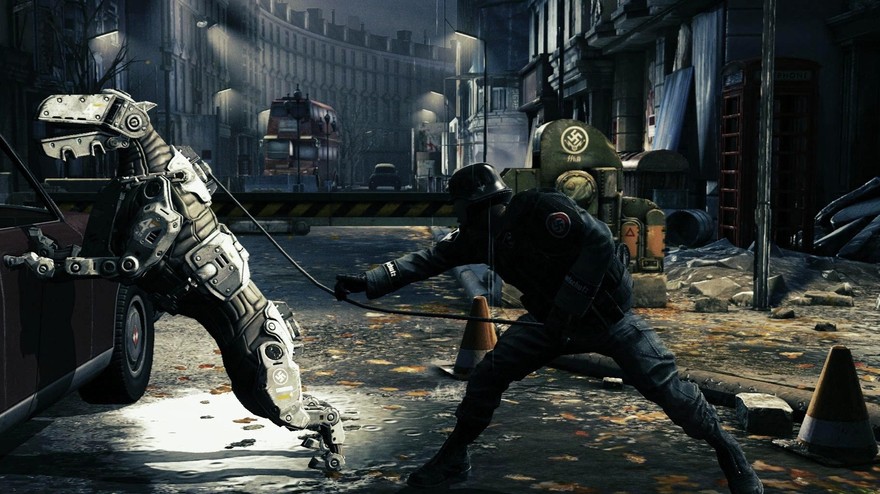 4:39 P.M. Back on land. In some sort of industrial complex. I take the coward’s way out. I crouch down, peek through a mail slot, and blast at a Nazi’s evil shins. The door creaks open and the fool didn’t have the sense to just die: He lays against the wall and starts shooting at me. There’s one thing he wasn’t counting on: That I’d shoot back, and more. I take his helmet (he died mostly of shin wounds, so his head was intact) and his gun. Maybe it’ll bring me more luck than it did him. I need to keep an eye out for bulletproof shin guards. DEATH TOLL: 14

4:41 P.M. This drew out two more. I dual-wield—who said war was fair?—and take out one up in the rafters and another behind a barricade. DEATH TOLL: 18

4:43 P.M. One up the stairs and two more inside. Grays, browns, and blacks. Another industrial complex. Everything’s dull here, but my focus is shattered by a moment of panic as I try to reload my two machine guns. Even at close range, these dumb Nazis are lousy shots. I blast his head and his helmet goes sailing off, landing near what looks to be a physics textbook. Physik 2. Somehow, I think the irony is lost on my victim. I, however, get it. I savor it as mortars explode and planes soar overhead. DEATH TOLL: 19

4:46 P.M. Another dog and soldier attack. Turns out what I was hearing before weren’t mortars, but some sort of giant sparking robot. No time to process what I’m seeing. Gotta keep moving. DEATH TOLL: 22

4:51 P.M. Out of bullets. This isn’t some sort of game. I don’t have unlimited ammo. I have to get resourceful, and this’ll be a story I tell the grandkids if I live to have some. I lob grenades down a corridor to flush the Nazis out. Then I knife them in the face. One. By. One. DEATH TOLL: 27

4:54 P.M. Sneaking into a far-off room, I spot a guy watching a soldier shooting out the window. Are they even part of this war? No matter. They’re part of my war. I don’t know what I’m interrupting, but I know what I’m leaving: corpses. DEATH TOLL: 29

4:58 P.M. I’m told via radio to take out commanders on sight. And it makes sense—soldiers won’t know what to do if the commanders don’t tell ‘em. God, Nazis are stupid. But not as stupid as me, because as it turns out I probably should have read that physics textbook. I lob a grenade at a commander’s head and miss, alerting him to my presence. He starts shrieking and calls in backup. I don’t even know how many I killed. When all’s said and done, there’s a bunker of guns flashing in succession like a goddamned Christmas tree. DEATH TOLL: 39

5:05 P.M. This is who we’re fighting? A guy manning a turret at waist-level can’t figure out how to shoot at me behind an impenetrable box. I pull out my revolver and exact natural selection. DEATH TOLL: 41

5:10 P.M. I try to run and spare lives, ironically ducking into what looks like a morgue. Who keeps gold and guns in a morgue? No matter. I get cornered and end up dismounting a heavy artillery gun, destroying every human nearby. Senseless. I look at one man, with white paint all over his face, and I’ve separated skin from bone. His charred rib cage sticks out from what’s left of his body. See what happens when you don’t leave a man be? DEATH TOLL: 46

5:16 P.M. They yell at me to stop, but don’t they realize that just alerts me to where they are? Another hallway of Nazis gone. I shoot one in the shoulder and he does an Olympic-grade roll away as his comrades blast at the support beams. But he’s done for and so are they.

These were people, though. They had lives. Their bunks were nearby. Here was their cigarettes. Their flashing armor. Their boots. Their copy of Technologie im Haushalt. Now mine. I always wanted to learn German. DEATH TOLL: 51

5:24 P.M. Another stairway’s worth of soldiers. One of them stands at the top, holding a grenade like an idle threat. That’s all it’d ever be. DEATH TOLL: 56

5:28 P.M. I use a massive turret embedded into the side of a mountain to clear a path, killing four unfortunate suckers who were only guilty of getting in the way. DEATH TOLL: 61

5:29 P.M. Do robot dogs count as kills? That means they live. As I ponder this, one leaps on me, snagging my foot in its mechanical maw. Private Wyatt emerges to “play catch” with a grenade. I owe him my life. DEATH TOLL: 62

5:33 P.M. Rappelling up the castle wall. I sink one in a catty-corner window and then another manning a turret. How do I reload while I’m climbing? I don’t know. War does things to a man. DEATH TOLL: 64

5:37 P.M. Inside. Nine dead. I eat their sausage and drink their wine. Who could eat at a time like this? Apparently they could. DEATH TOLL: 73

5:41 P.M. Poor guy tries to sneak up on me. I’ve been slaughtering Nazis for an hour a half, but this is the first death rattle I’ve noticed. DEATH TOLL: 86

5:45 P.M. Don’t they get that everything’s just easier for me? My guys need help. I save them. They were stuck in a courtyard balcony, unable to stave off a mere dozen machine gunners. I hop onto a turret and play the hero. They call me sir. DEATH TOLL: 98

Those Nazis aren’t that different from us.

5:55 P.M. Turns out everyone could use some saving. We got trapped in a goddamned incinerator, and I carry one of our own out. He’s wounded bad. Just as we start to catch our breath, an armored freak bursts out of the ground. He only has eyes for me. They blast away at him. Eventually we figure out his weak spot: He hates being shot in the lungs. Those Nazis aren’t that different from us. We cut off his circulation and his face explodes. These are the sorts of things that bring a unit together. DEATH TOLL: 99

5:57 P.M. We finally put eyes on Deathshead. Asshole invented the cyborg soldiers. He’s making me choose which of my own men should be killed. He has us all pinned beneath hulking cyborgs. He says my stubbornness to choose is no match for his patience. Fucker learned our language just to torment me. He’s trying to teach me a lesson. But doesn’t he understand—this is war. People die. Reluctantly, I gesture towards a soldier I don’t recognize. I spare Wyatt, but he’s hurt bad, too. None of us are getting out of this alive. I’ve never seen cruelty until now. DEATH TOLL: 100

6:03 P.M. Wyatt dies. A stray piece of shrapnel gets him in the head as we leap out of the tower back into the Baltic Sea. Choice is an illusion. We all die in the end. DEATH TOLL: 101