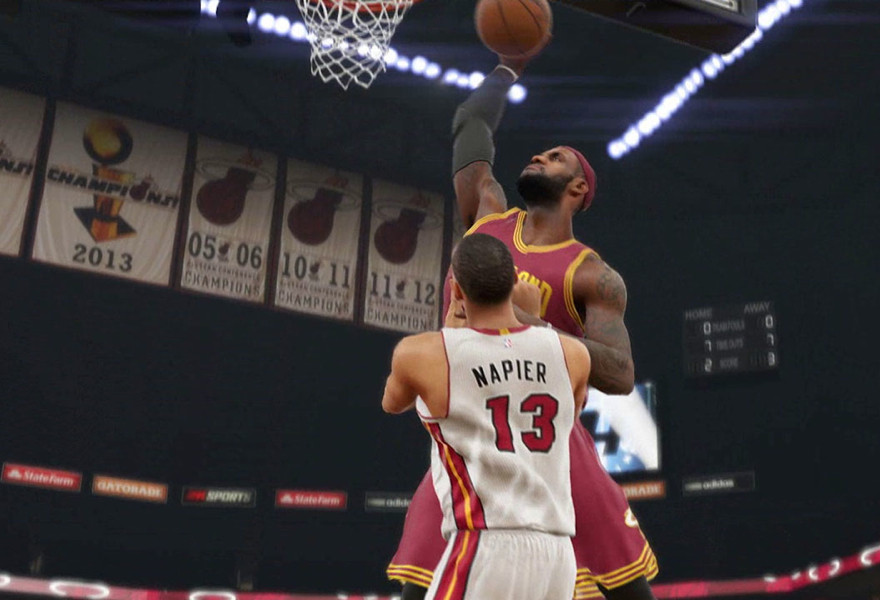 Basketball is the only sport I play anymore. I try to get into a lunchtime pickup game twice a week at work, and occasionally, when the weather is nice, I’ll head out to a court in Providence to shoot around or try to find a game. I’ll sometimes play Sundays at the Jewish Community Center with a bunch of old guys who can’t run or jump much anymore, but who knock down set shots like crazy. I played in high-school for four years, and was a captain of our tiny prep-school team for three of those four (#humblebrag), and I coached boys and girls  high-school basketball for three years as well, so I can hold my own. I’ve been around basketball basically my whole life, so I guess you could say I’ve played a lot.

So I tend to think about the my experience of playing NBA 2K15 on a granular scale, comparing play in real life, and play in the videogame.

Sometimes, the comparison is kinesthetic and mechanical. Consider something like a drop step, a foundational offensive post-move I’ve performed and practiced and taught many thousands of times. A well executed drop step involves using your body, specifically your back and your ass, to seal off your defender to make a horizontal step to the hoop. So much about executing a proper drop step involves feeling where the defender is applying pressure to your back, so that you can take your step in the right direction. It also involves an explosive action as you take a power dribble to move, and use your body to seal off the defender before going up for a shot.

When I flick the thumbstick (or “Pro Stick,” in NBA 2K parlance) toward the baseline to perform a drop step, it is mimicking on a smaller scale with my thumb the explosive dribble-step of the move. Mechanically, NBA 2K15 does an excellent job of translating the physical experience of playing basketball to a digital game controlled by a couple thumbsticks and a few buttons. Many of the actions of fingers mimetically reproduce the actions of the body on a court. Flick the thumbstick backwards to perform a behind the back dribble. To perform a crossover, move the thumbstick from the ball hand to the off-hand. Logical, right? NBA 2K15 controls are definitely not easy, but they make sense against the logics of real world performance. In a game with dozens of offensive skill moves, from dribbling to post maneuvers, this is no small feat indeed.

Other times, my comparison between “in real life” basketball and NBA 2K15 has more to do with the experience of being a basketball player, whether momentary, like with a pickup basketball game and it’s digital parallel of “MyPark,” or whether imagining life as an NBA pro. The vast majority of the game is built around a replication of the professional game experience, and whether you are playing a quick matchup, or sinking hours into the revamped MyCareer mode, this is really where NBA 2K15 exhibits the highest level of polish, and where you can find some welcome innovations to the sports game genre.

The presentation of the game is exacting in its replication of the televisual experience of an NBA basketball game, far exceeding any other sports title this crowded release season. The commentary, which has always been great in the series, even in the Dreamcast days with Bob Steel and Rod West, continues to be a strong part of the game’s overall broadcast feel. The inclusion of real audio clips from sideline interviews as part of the “broadcast package” feels like a revelation, and I wondered why we haven’t seen it used in sports videogames more given the extensive back-catalogue of recorded audio available from more than a half-century of televised sports.

The inclusion of real clips from sideline interviews is a revelation.

On the other hand, the use of real player voices in the My Career mode serves as a cautionary reminder of why good actors—hell, even bad actors—are paid professionals. Most of the lines regurgitated by the pros are mumbled at best, incoherently voiced at worst, and while I want to lay the blame on the NBA players, they were not given much to work with in terms of dialogue. The NBA pros are like cliché-spouting Disney animatronics, which would be fine if much of what they said made sense or felt in any way conversational, as I imagine two teammates would communicate. I’m sure there are plenty of conversations between NBA teammates about sticking together, playing as a team, giving 110%, how the NBA is a business, about how personal statistics don’t matter, and so on, but there is no way they are as cold, robotic, or lifeless as the penned dialog in NBA 2K15. Then again, maybe the conversation is horrible because your pro, no matter what you do in the game, is an asshole.

Because regardless of which of two voice options you choose, you will be  a real douchebag. Your character never even really becomes a likeable loser in any way, he’s just a cocky dingbat with entitlement issues. It’s really frustrating to want to live out the life and career of a budding NBA star, but throughout the experience you’re just filled with self-loathing because your pro has undeserved, unearned hubris and the maturity of a gnat. The vast majority of NBA rookies have dedicated their lives to get to the elite professional level, and they are professional, articulate and mature, but the writers who dreamed up the loser we are forced to play as here have us think they’re all hotrodding tools.

Terrible writing aside—and it’s hard to put aside, because of the frequency of dialogue—My Career represents the next evolution of career modes in sports videogames, and the efforts to create a lived professional athlete experience hits the mark, otherwise. Whether answering questions at a press conference, making decisions about clothing and sponsorships, or even wading through vapid conversations with your teammates, coach or agents, My Career continues to be one of the most well-thought-out sports videogame career modes. Making a choice about moving to another team for me was no longer just informed by winning or money—I felt a connection with my digital teammates, who had put up with my douchiness. I no longer just wanted to be successful to advance my career; I didn’t want to let down a team of real, kind of round characters. I felt happiness when my teammates succeeded, not only because it improved our chances for winning a game, but because I actually cared for them.

For folks who play “traditional” role playing games, attachment to an NPC is not uncommon at all, and it’s often the marker of good writing or a compelling campaign. It can be hard enough to get athletes or sports fans to talk about certain types of emotions because of the hegemonic notions of masculinity attached to sports performance, but the developers at Virtual Concepts have understood that attachment, commitment, love, and empathy are major parts of the experience of being a sports teammate, even if they are often covered in a hyper-masculine veneer. I haven’t cried yet in NBA 2K15 winning a championship, or because a teammate retired, and I’ve felt a lot more empathy from other kinds of videogame experiences, but this is a major step in the right direction for the convergence of the role-playing and sports videogame genres.

It’s hard to get athletes to talk about emotions because of hegemonic notions of masculinity.

While living a character’s story is engaging, players will be more inclined to attach themselves to the shell of character, and transport personal experience into the game, especially if the player (like myself) has a deep pool of personal basketball memories to draw upon for inspiration while filling the gaps. It is often not what’s explicitly written about or for the character that rounds her out and makes her whole and alive, but rather the negative space left that needs to be filled by the imagination that ultimately draws the reader or player in. It’s my sincere hope that as the series moves forward, and continues to iterate on the role playing elements of the game, that the developers create more space for personal expression not only in the aesthetics of apparel and corporeal customization, but in behavior and mechanics, to allow players to really engage the experience with a richness not yet seen in sports videogames.