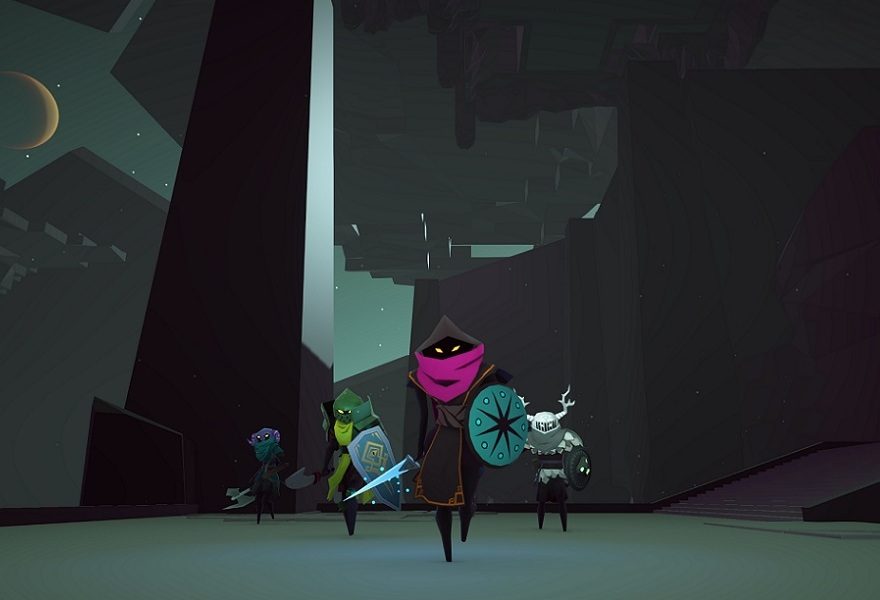 How’d dungeons get so big, anyway? Before fantasy games, dungeons were modest medieval cells or imprisonment-themed sex rooms. But in today’s post-D&D RPGs the dungeon might as well be the cornerstone of the universe. Any tough mazey place becomes a dungeon: labyrinths, catacombs, mines, caves, mansions, factories, and even spaceships are called dungeons if there’s someone with three health bars and a pot of gold inside. It’s understood that the Forest Temple in Ocarina of Time (1998) is a dungeon, Rise’s mind in Persona 4 (2008) is a dungeon, and Karazhan in World of Warcraft (2004) is a dungeon, though none of them are actually dungeons. (OED: “A strong close cell; a dark subterranean place of confinement; a deep dark vault.”) A game dungeon can be a unit of time, a container for a theme, or a system of education. Often the only prisoner inside is the player.

I wasn’t around for the primordial game dungeons of the early ‘80s, so for me the definitive crawl was not through Rogue (1980) or Wizardry (1980) but down into the ugly rhizomes below Daggerfall (1996). If you never played the game, imagine a version of No Man’s Sky that ran on a 486 and modeled Hell instead of outer space. Instead of exploring the universe you got lost in holes. Hundreds of oversized subterranean labyrinths hid quest items in random corners behind skeletons that howled like they were more scared of you than you were of them. Pixel grunge made every visible part of the game drip into every other part, and the 3D automap looked like a picnic basket covered in ants.

The Daggerfall section of the Elder Scrolls wiki notes dryly that “even the least of the random dungeons are logically too large for the majority of quests.” The Hints page advises following the “right hand wall method” of sticking to the dungeon’s rightmost edge and hoping to find the quest item along the way. If this fails, it proposes the “left hand wall” method. I don’t remember holding to either method as a kid. Instead I would rush into the heart of the maze and get terrifyingly lost, abandon all hope of finishing the quest, and run down the same blind alleys again and again in search of the exit. Sometimes I would resort to the “create new character” method. And so a few of Daggerfall’s save slots became cells for adventurers trapped underground forever, making an honest dungeon out of those warrens at last.

Necropolis, a deeply unlovable new dungeon crawl, is no Daggerfall. But for a minute it took me back. After clearing a few levels of the game’s one dungeon—a roguelike-like experience with Dark Souls-lite-like combat—a friend and I descended to a floor that could have fit every earlier area inside itself. It stitched together all the game’s biomes with no apparent plan, joining vaulted corridors, moving walkways, steam tunnels, swamps, and thin mountainous paths. Like every level, it had no map. Like every level, it was occupied by slow-moving creatures who didn’t rise to even an MMO player’s expectation of monster intelligence, who would single-mindedly chase after Player 1 as Player 2 stabbed them to death from behind. Like every level, it was “low-poly,” which in Necropolis also means low-detail and low-interest: the sort of blank geometry that’s fine to rush past in Race the Sun (2013) but miserable to hike over on foot. And like every level it was littered with dozens of copies of the same few useless weapons, each summoning the same “funny” pop-up as you approach, e.g. “When choosing between this ‘weapon’ and let’s say, a rabbit; a rabbit’s more useful in combat.”

I did eventually find a cluster of rare items on the ground when my friend threw all his equipment down and said he was never playing Necropolis again. This brought on a wave of nostalgia. It felt for a second like the old Daggerfall magic had returned, crushing yet another adventurer with an unforgiving, intolerably huge dungeon. But I was really watching something simpler: the timely rejection of an awful game by someone who wasn’t doomed to finish it for the sake of a review.

Necropolis stands out for its lack of imagination

That one stupidly big floor was the only real hint of personality in Necropolis, and it was an illusion. The levels that followed (nine in total) were shorter and easier and made of the same parts. The whole game is more or less solved once you learn how to kill the first enemy (circle with shield raised and then strike, like the world’s dullest Dark Souls player) and dodge the first trap (jump). As you gather invisibility and invincibility potions you start to stomp carelessly through crowded areas that once required a bit of care. My original character died in minutes, trading swipes with an undead warrior in my introduction to the game’s listless underwater brawls. My second character beat Necropolis.

You can see why the game had to be easy: it’s so plainly joyless that anyone who dies midway through will probably uninstall rather than make the long walk back down. You’ll find nothing but the same drab walls and kooky item descriptions, repeating floor after floor, getting “funnier” every time. The same clicking bomb-rodents will jump out of thin air behind you and blow up while you’re trying to use the crafting menu, forcing you to reopen that same menu to brew a new health potion, giving another bomber time to pop out and scuttle over the stones behind you…. 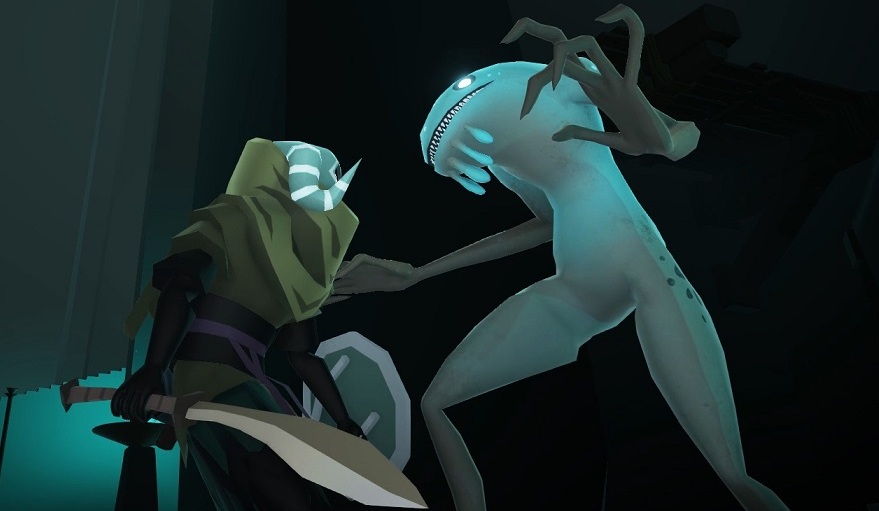 In the annals of dungeoneering, Necropolis stands out for its lack of imagination. The strange caprice of Daggerfall’s dungeons gave its world character—dread of those underground spaces (more horror than fantasy, as Adam Smith once wrote) shaped your behavior in the lands above. And these days the world is teeming with dungeons that boldly assert their identity, from the punchy bullet hell of Enter the Gungeon to the mutant-filled wastelands of Caves of Qud (2015) and the Doomy corridors of Teleglitch (2013). With no character of its own to speak of, Necropolis is defined by what it lacks: true builds, classes, bosses (there’s one, but he won’t impress anybody), deities, rare events, articulate combat, narrative hooks. Why even keep permadeath when you cut out all the variation that makes restarting tolerable?

If Necropolis has one thing going for it, it’s the scrupulously accurate title, a rarity in a genre of questionable “dungeons.” Its halls are indeed inhabited by skeletons and rotting things, in sufficient numbers (1,008 monsters killed, according to the victory screen) to constitute a city or at least village of the dead. This settlement will expand, according to an apologetic post from the developers, with new enemies, new places, and retuned combat. I hope things do get better, but as it stands there are a few hundred other games I’d crawl through before coming back to this one.