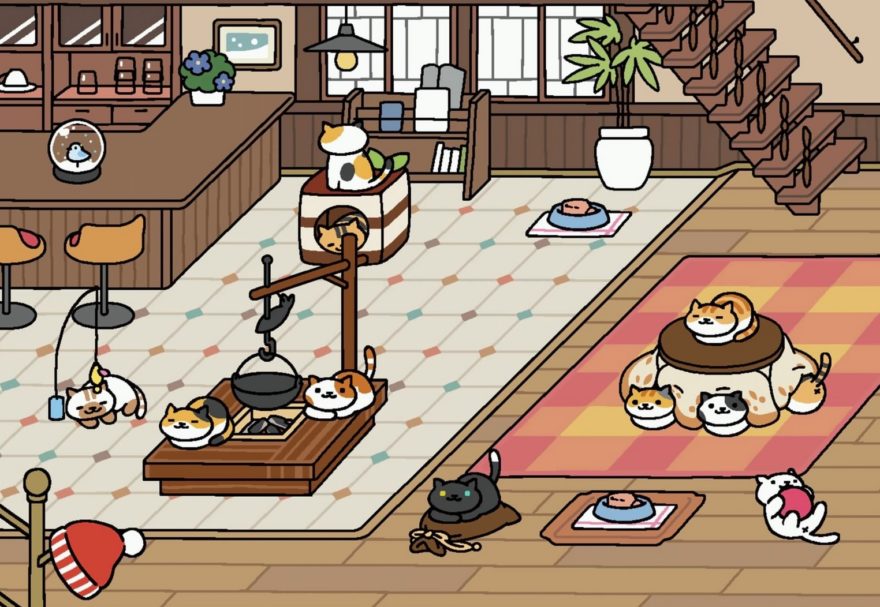 One of the most important games in the world (and don’t you forget it) Neko Atsume, the cat-collecting game, got an update last week. As you’d expect for this time of year, the update sees the return of the snow music as well as Christmas decorations to spotted around some of the scenes. There are also some new items such as a snow dome, an antique chair, cocoons, and a kotatsu (a wonderful, feet-warming invention).

That is not all. In fact, this new update’s greatest gifts are the most elusive—you’ll have to be quick to spot them and take a snapshot. The first is a new animation: every now and then, the cats will wash their faces for a few seconds, and yes it’s adorable. You can see Peaches washing her face in the screenshot below. That’s what you’re looking out for.

The most adorable screenshot today (via Imgur)

OK, so, about this other mysterious addition. It’s a new cat that goes by the name “Whiteshadow.” It used to be that Peaches (pictured above) was the most finicky cat in Neko Atsume. Most cats can be relied upon to turn up if you put out the right toy or treat or whatever. But Peaches was a little fussier than everyone else. But now she’s been outdone by Whiteshadow, who is a bit of a ninja cat who hides in scenes, sometimes on the very edges where you can barely see him. Good luck trying to get this pesky kitty to show up in your scenes.

what Whiteshadow is attracted to seems to vary in each scene

That said, the game’s community has been slowly putting together some theories as to how Whiteshadow can be lured in. First off, it appears he likes Sashimi and Bonito Bitz, so make sure to put some of that out. Secondly, what Whiteshadow is attracted to seems to vary in each scene. In fact, what he’s most after is a way to perform ninja moves. For instance, he’s been known to use “espionage activity” in the Original and Cafe scenes, while he uses “Scouting mission” for Zen and Rustic scenes. What this involves is hiding in some manner in these scenes, perhaps on top of a vase or under the stairs. Can you see him in the screenshot below?

Whiteshadow is lurking, unseen … (via Imgur)

Good luck getting Whiteshadow to turn up. Just keep an extra vigilant eye out and hopefully you’ll get a little ninja treat for this festive time of year. Oh, and as we’re near the end of 2016, it seems like a good time to remind you that Neko Atsume is getting a live-action movie adaptation next year. It’s only confirmed for Japanese theaters so far but hopefully it’ll head West too.

You can download Neko Atsume on the App Store and Google Play.