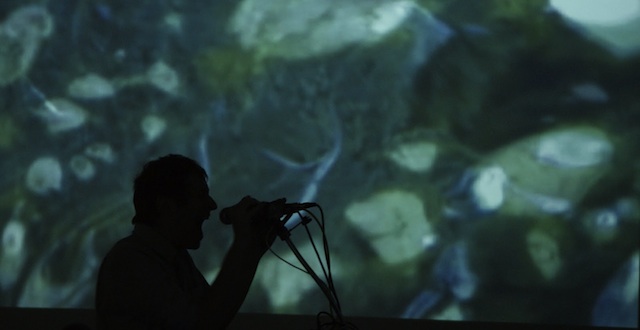 You’re playing Red Dead Redemption. Your avatar, John Marston, walks up to a saloon. Before even stepping through the swinging doors, you hear the sound of clinking glass and piano music.  Push through and the chaotic noise of life in the Old West swells around you. Upstairs, you hear an argument breaking out. Better get your six-shooter ready.

Vivid and immersive sound design brings a game world to life. But what if the sound of our own world could be designed in the same way? The Washington, D.C.-based music duo Bluebrain try exactly this with their recent project, The National Mall. You can’t listen to their work by pressing play. Instead, you download their app, head to Washington, D.C., and walk around with your headphones on. Music flows, surges, and dies away seamlessly as you stroll through 264 separate zones. What you hear is based entirely on where you are in the Mall.

Ryan and Hays Holladay are the brothers behind this “location-aware album.” They will release their next regional GPS mashup this month, based on NYC’s Central Park and dictated by the four seasons. We spoke about derelict phone booths, the art of limitation, and finding Hyrule in New Jersey.

You’ve said that you wanted to use the idea of a videogame to re-imagine how to compose music.

Ryan Holladay: Think about a game like Myst—where as you approach something that is emitting a sound, that sound will increase to the point where, when your avatar is right next to it, you’ll be hearing whatever that is, whether it’s a waterfall, or even a person talking. And as you move away, that sound disappears. The idea behind [The National Mall] is to give you that sense, not only visually, but aurally. To be able to hear, “Okay, I’m approaching this thing,” or “I’m leaving this area.” In a way it’s a simple idea. It makes sense why that would work, and how that would be very practical in a videogame.

We thought, “What if you replace that map within the videogame terrain with the coordinates of an actual map?” In this case, the National Mall. And instead of assigning sounds, like you would in a videogame, to mimic real life, what if you made it musical, or surreal? For instance, as you start at the base of that hill [at the Washington Monument] you hear a single cello and piano. And as you make your way up to the top, more and more instruments keep getting added, to the point where you’re literally at the very top, touching the Monument, and you’re hearing out-of-control blast beats.

Another example—there’s a pay phone, a shell of a pay phone somewhere over by a pond in the Mall. And this pay phone doesn’t look like it’s been used in 20 years. We thought it’d be funny if, as you walked by it, the phone started ringing, so it’d be almost this weird, surreal thing.

In games, sound often gives information to help a player progress toward a goal. I’m interested in what happens when you take that goal away—you’re essentially taking the game out of this system and leaving all of the musical cues in the environment. Is there a disconnect? Or is the goal just very different?

Hays Holladay: One thing we did a lot before, and while we were composing, was going down there and seeing how people walked around. And in a place like the Mall, there’s no dramatic storyline, but there are ways that people move—they want to go to the Jefferson, so they’ll go around the title basin—so there are these objectives and different paths we found that people would generally take. That’s something we played with.

Another goal is, in order to hear every one of these pieces of music, you have to literally walk on every inch of the National Mall. So if you want to be a completist, you can take the time and really explore the entire thing.

Do you hope your project is one of those first big steps where location-aware music becomes a movement of sorts, and more and more people pick up this idea?

Hays: I know that more people will come up with even better ideas of how to fuse the two. But what I hope doesn’t happen is something like the 3D effect, where suddenly it’s not worth listening to an album, or a label might not think it’s worth putting out an album, unless it has an app component that might be totally useless for the album. But I love the idea of people composing for a certain three-dimensional way of interacting with an album.

Ryan: I think there’s sometimes a misconception that technology has to enable you to do anything, anywhere, at anytime. In a weird way, we use this really advanced technology, that everyone has in their pockets, to very closely limit what you can do. And it’s in that limitation that I think it’s really exciting. You can only hear this music in this location. You can only hear it in this certain way. I find that really interesting.

“There’s sort of a needless distinction being made between what exists in the virtual world and what’s existing in the physical world.”

On the website DCist.com, a user named Cory dismisses the project, commenting, “The middle layer of software creates an unnecessary rift between the music and the listener.” It reminded me of what you were saying, how you can only go and listen to this music in a very specific place. What are the limitations to this sort of experience?

Hays: There’s sort of a needless distinction being made between what exists in the virtual world and what’s existing in the physical world. For instance, there’s a Mark di Suvero sculpture on the National Mall. It’s really awesome—it’s big, red, with steel beams… That exists there. It’s a real thing that actually exists. And you might not like it. But it’s there. You might not agree with the fact that it’s there. But that was somebody’s interpretation of what that landscape could look like. In the same way that any physical artwork is.

Not to compare ourselves to somebody like Mark di Suvero, but what we’re doing is I think similar. We’re looking at a landscape and saying, “What art does this inspire in us?” And for us it’s musical. And it’s also virtual. Not everyone is going to hear this music as they walk around—you have to make that conscious choice.

But I don’t see it as different from any other work of art that has been made for, or inspired by, a landscape. This happens all the time with sculpture and painting. It’s just that we haven’t had the tools to do it musically in this way before.

If there was one virtual landscape that you could physically roam around in, whether it’s because of the music or anything else, which one would you choose? Where would you go?

Ryan: The map from the original Zelda. That almost feels like—I can’t believe that’s not a real space, you know? I know exactly where that first cave is. I know what happens when you go right off the first screen and go up. I know where everything is; it’s kind of insane…  I almost think of it in the same way I think of the small town in New Jersey that we lived in when I was in kindergarten.