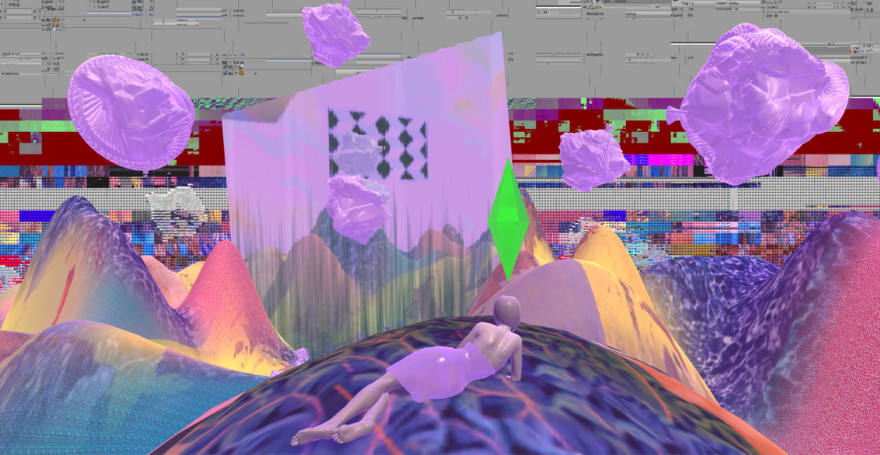 Danny Brown, who my editor insists is one of the best rappers alive, just hit the road opening for A$AP Rocky and Tyler the Creator. If you’re following the tour, you may have seen people who were in the audience sharing pictures and videos online saying how “insane” the visuals are behind Danny as he, too, goes frankly insane each night onstage.

They’re not wrong. The visuals are hyper-colorful, the camera thrashing around as if dropped off a cliff, spinning through virtual architecture with colors and objects bleeding into each other. Sometimes a woman fights a dragon with a large sword. There are tentacles, digitized oceanscapes, and a climber stuck in mid-air in repeated animation on an invisible rope. You can hardly discern what’s going on. But it makes sense when seen with the music and Danny’s frenzied performance.

The visuals are the work of net artist Cassie McQuater. We’ve enjoyed her polychromatic digital collages before and delved into her more personal work, such as her videogame NO FUN HOUSE, which expresses relationship anxiety by embracing the glitchy aesthetic of the amateur computer user. And so, when Danny’s manager reached out to Kill Screen about finding an artist to collaborate with, we thought of her. She was given only a week to produce a half hour video that would play behind the emcee during the tour. She made it in Unity and runs it through a Max/MSP patch synced with the audio. It was a lot of work: “I had to learn a lot of new programs in the time span of a week to pull it off,” she says.

Danny and McQuater’s videogame-inspired art are a natural pair. He’s been known to tweet about being stuck while playing Persona 4: Golden on his PlayStation Vita, asking for tips to progress. He’s even named one of his cats Chie after the game’s kung-fu fighting character. The guy likes Japanese RPGs, which are often as barmy as they are energetic. And McQuater can bring that. But what she also nailed in these visuals is the hyper-saturation in Danny’s last album, Old, which brought it together as a constant in-the-red druggy overload. Instead of peaks and dips between the tracks it’s an unending barrage, and that’s what McQuater gets at with the video.

McQuater intended for this effect—she’s a fan of Danny and understands what his music is all about. But she also remarked to me that the hurried deadline she had to work with led to “a lot of sleepless nights and chaotic visual decisions,” which she thinks added to the end result. In fact, all she really had planned out before cracking down on the thing was the color palette—”somewhere between neon and pastel, highly saturated, LSD like.” Another component she knew she wanted soon after starting were for all the characters to be women.

“I wanted my female characters to have a powerful presence—a girl with a sword fighting a dragon when Danny performs ‘Handstand’, still/scary statuesque women watching over a mansion with a weird distorted waterfall when Danny does ‘Dubstep’, clouds of smoke around a sniper in a desert oasis for the opening, things like that,” she tells me.

“I love how Danny’s energy feeds into the visuals”

Surprisingly, there is some semblance of a narrative throughout the piece. It’s something to do with videogames and women and, well, I haven’t worked it out yet. This makes sense given that McQuater didn’t add it until much later, when getting near to finishing, and so most of what connects the scenes is a loose focus on on primary colors and visual effects.

She doesn’t tell me as much, but I get the impression that McQuater remembers the week spent creating the visuals as a blur. She says the strangest thing about the whole project was not having control of when it would be released and getting the feedback she usually acquires beforehand. Indeed, there was no time for second guessing or critique. It had to be ready to go live immediately. And so all that McQuater had to go on in terms of the reception to her work is what people have shared on social media.

“It’s weird to see someone post a pic they took on their phone of work that I made in a white heat and it’s being projected to a crowd of more than 5,000 people going completely nuts,” she says. “Everything I’ve seen has looked really good and really nuts at the same time. I love how Danny’s energy feeds into the visuals—it makes them so much better and I can’t imagine them existing without that now.”

The tour itself has over a dozen stops and has already been to places such as Madison Square Garden. But the most important one for McQuater, as well as Danny, has been DTE in Detroit. It’s the city that both the artists call home.

You can see more images from the visuals that McQuater made for Danny Brown here.