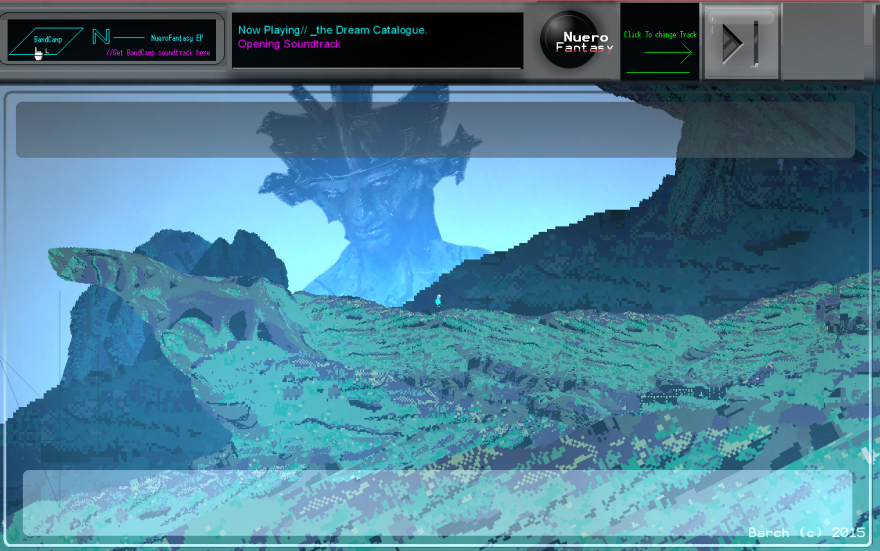 You could argue the toss all day as to whether DEIOS is bad to play due to its obsession with your failure, or whether it is exactly that quasi-rebellious attitude that redeems it—it rupturing in hazy lines each time a gunshot rings out, a film of data-bent martial noise over its fantasy. But what can’t be debated is the quality of its electronic composition.

The shot of DEIOS that I cannot remove from my brain is this one. Those green shaded mounds nestled on the edge of a crystal lake, which reflects a half-tone image of the land above, and what looks like small clouds of varied color floating by on the water’s surface, further confusing the separation between sky and lagoon. When I see this image, I also hear the game’s soundtrack: interlacing early computer sounds shimmering into existence, an inward electric snare throbbing with half-effort, while a drony bass noise borrowed from a cyberpunk cityscape imagined circa the synth-heavy 1980s boils underneath.

A moment of magic happened, almost like perfect cinema

Barch, the creator of DEIOS, promised a lot with that shot. There’s a lot of talent and ideas and feelings pent up inside it. Before playing the game, I imagined a million different scenarios veering off from those dense pixels, enraptured by the possibility of what could be. And so it was a shame, at least for me, that he didn’t branch off more from that concept, instead steering it towards gunplay in mostly empty rooms.

But maybe he’s learning. Or, at least, shaking the shackles of videogames loose. His latest release is entirely conceptual and all about the marriage of image and sound, without any sign of departure. Titled Neuro Fantasy, Barch calls it a “10 Minute Soundtrack Experience in a world of Parrallax showing off the new dietyRPG engine.”

Mostly, it’s something to play around with while listening to Barch’s latest EP, also called Nuero Fantasy—listen to it on Bandcamp. The songs are mysterious retro-synth tracks that conjure images of old computer screens and networks of exotic lo-fi virtual worlds. It could easily be the soundtrack to sci-fi films of the electric ’80s, or like, Drive. As you play the game, along the top of the screen is an interface resembling an old hi-fi where you can change the track you’re currently listening to. The rest of the screen is dedicated entirely to letting you stare into virtual worlds composed of Barch’s evocative pixels.

Inside, there’s a hub world that you return to regularly, where a number of doors leading into each pocket universe can be entered. Sometimes there are creatures that will blurt out a sentence. Some build upon the alien environment by telling you that the pods you can see are where they were born. Others give you something to chew on; namely, a bit of falsifying philosophy: “A single step begins with a journey,” one creature states.

But this is not the enticing part of Nuero Fantasy. When I’m playing it, I am a director, trying out different songs to the visuals. In one, a huge stone idol leers in the background somewhat menacingly, so I flick to the track that best captures that threat: some pulsating, drive-by machine throb. Another area, subterranean and much rockier, has a secrecy about it. And as my character made like a superhero, running across the craggy mounds with a cape flying behind them, I felt the need for a soundtrack with a slow dreamlike beat and ascending celestial notes, so I found it. A moment of magic happened, almost like perfect cinema, as if it was always meant to. Finally, I figured, I had found something close to what I wanted out of DEIOS.