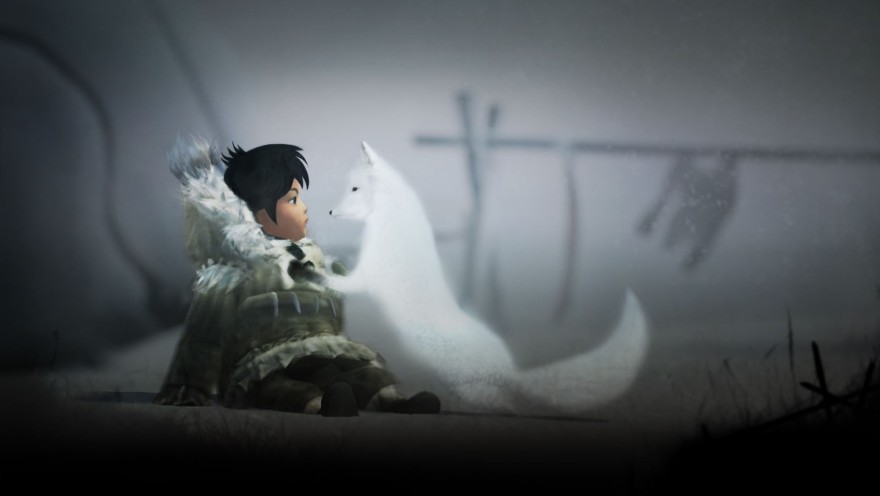 Watch any of the “Cultural Insights” documentary shorts in Never Alone, and the meaning of the game becomes clear. Out on ice that stretches white in every direction, the Iñupiat are anything but isolated. When they’re not with their community, they’re with the world around them, the sila.

Everything is connected. And in a very believable way, Never Alone (Kisima Ingitchuna)—the self-professed first Alaska Native game from Upper One Games—shows that. As a young girl who sets out to find the source of the terrible blizzard afflicting her village, the player moves from ice caps to caves, cliff tops to forest, with a narrative interplay as seamless as day turning to night.

The scene is painted with natural colors, with glistening ice and choppy waters, and glimpsed through a pane of frost. Your screen becomes a snowglobe, entrapping the journey of the girl and the fox she meets to the source of the blizzard. You might as well be shaking the tiny world, making the snow fall. Bracing against the wind might be a nuisance in other games (no offense, Chrono Trigger), but in Never Alone, it’s a matter of survival and a testament to the ruthless difficulty for people who live off the land. They are subject to nature’s every subtle whim.

The icy wind blows in a clear pattern, yet the blizzard never relents. Missing the telltale mark of an incoming gust, and from which direction, is nearly impossible, but acting against it is less than convenient. All things simply are, and the girl (and the player) accepts them, no questions asked. When the Northern Lights come alive, they swirl and swerve in green circles with hands eager to snatch, as mischievous as the children folklore tells us they are. When the tree spirits bend their branches to make a path, or loon spirits crane their necks to lift you up, they do so without fetch quests, or mission objectives, or reciprocation.

Nature is that, for the the Iñupiat—not merely existence, but a journeying through things as they are, with the smallest possible give or take. Never Alone respects that, forcing nothing on the player but the experience, a movement from left to right, or right to left, with wonder in between at the very conscious world around you.

But while its fiction is convincing, “believable” and “real” are not the same. That’s why its moments of unnaturalism are so jarring. The enraged polar bear that chases you over the tundra might be a misunderstood creature, but he’s less sympathetic when he catches your white arctic fox friend only to maul him courtesy of unsightly graphical glitches. The uncontrollable twitching appears elsewhere, too—an awkward jump here, a random spasm there. Whether in single-player with the A.I. or in co-op, the result was the same. Death is a natural part of life, but spike impalement and the despair the girl or the fox experiences at the demise of the other turn this pleasant game for children into one to reconsider until they’re a little older. Physics have never been so funny and then so upsetting in so short a game.

Yet Never Alone remains graceful. Its most depressing moment reminds us that if a small girl can survive the harshest of conditions and the meanest of fates, so can we. Life goes on; the spirits never leave us.

We learn more through play—or, outside of games, through the experience of doing and living—than we do through inaction. But Never Alone’s “Cultural Insights” are not the lazy explanation its main feature lacks. Instead, they provide a greater context to the story, or the folklore, that you play. The simple drawing-like animations are scrimshaw, etchings that told stories and recorded history. The troublemaking “little people” that steal your bola, a throwing weapon, are a known myth. And the terrible man who burns the girl’s village is the Manslayer, a recurring character in Alaska Native stories.

You are not the greatest force in the world, one video tells us. And you feel it—through wind, through ice, through snow. Through the spirits bigger than you, and your dependency on the fox that keeps you alive and moving with its magic—on the backs of fish that dance across the waves, or breathing in the belly of a whale.

Yet the humble hero, as fragile as a little girl, can still stop a blizzard.