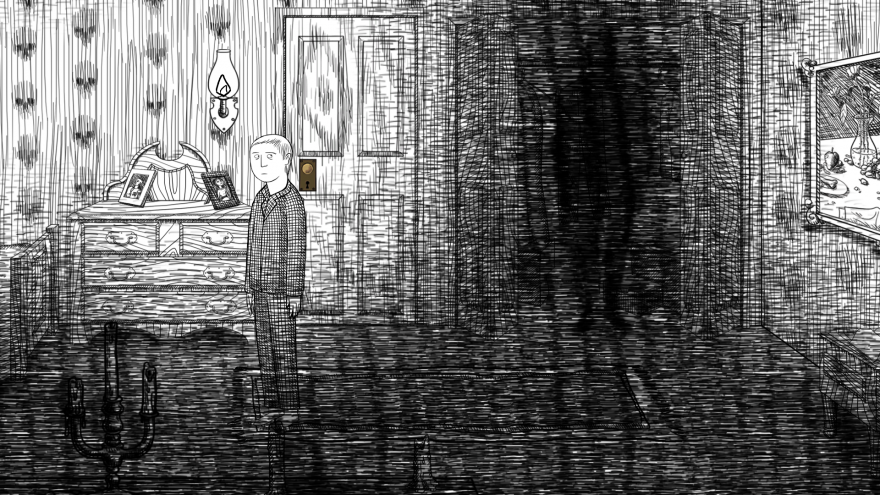 It was a dark and stormy night when I booted up Neverending Nightmares. It was, scout’s honour. The city was getting hammered by rain, easy on the thunder, but stormy nonetheless. My roommate also decided to go on a snack run, leaving me alone in an apartment notorious for groaning pipes.

Neverending Nightmares has “spooky” all over it. Score like a Hammer film, drawn like Gorey, gothic as the torrid manor it takes place in. Not to tempt fate on that menacing night, I started playing Drake, because what kind of ghost or ghoul would murder someone while they listened to Drake? Only some sort of hater ghost who doubted Drake, that’s who. 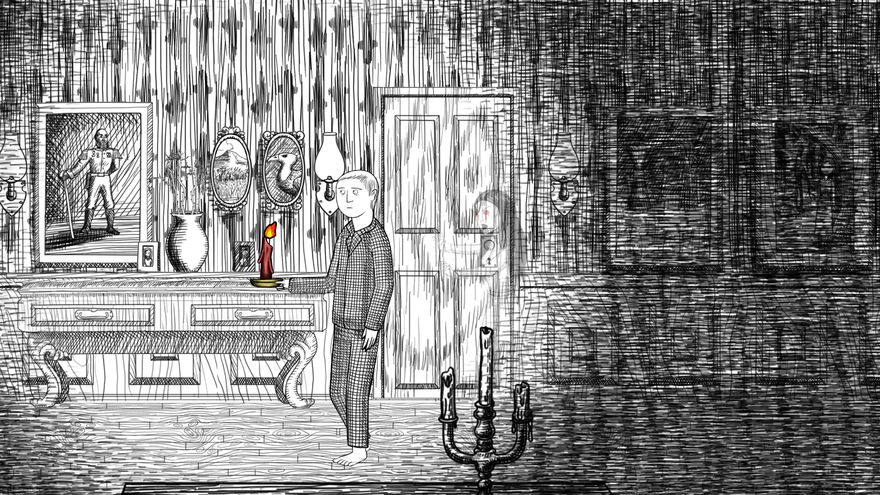 In Neverending Nightmares, you are Thomas, a man who is fond of pajamas. Restless, you decide to roam the dark, long halls of your estate, wisping into quiet rooms and sheathed by the house’s crosshatched shadows. You will eventually come across a vision, a very telling one, that will jolt you awake in your bed, beginning a dire cycle of false realities and a sleepless, haunted night.

A scary venture means vulnerability. We wouldn’t worry about Drew Barrymore at the beginning of Scream if we knew it was the high-kicking Drew Barrymore from Charlie’s Angels. A grown up pyro hurling Firestarter Drew Barrymore would probably fare pretty well too. Thomas is as defenseless as a game’s protagonist comes. Rarely wielding anything, he’s mostly capable of walking, inspecting and hiding. I’d say running, but the man needs a new cardio routine. The wheezing he unleashes when you jog for too long is an uneasy and desperate sound.

This sense of vulnerability is amplified when the game holds its cards close. Spaces that seem empty, passing shadows in a doorway or window, a spot of ambiguous red. Noises that could just be the trees. Movements that could just be the wind. Second guesses in the darkness, a very relatable kind of terror. As the night goes on, as your dive deeper into this evil dream, subtlety begins to take a holiday, and the core of the game shifts from exploration to survival.

Giant lumbering ogres trudge the halls. Asylum sequences are patrolled by blind, bound, hissing tall men. Blood, which was once so sparing and daunting, now splattered by the bucket on walls, leaving written warnings—just like in every other horror game on god damn earth.

Despite being so unlike many other horror games, Neverending Nightmares begins to fall into the exact same traps. The monster closets. Predictability. Trying to wind up tensions even more instead becomes exposure therapy, having to deal with the same monsters and ghouls routinely loosens their threat. Checkpoints, though convenient, mean seeing your jugular gnawed out by the same hobbling madmanrepeatedly. The limited functions of the game, tip-toeing the environment from right to left, begins to feel more limiting than refreshing.

This is not a problem exclusive to Neverending Nightmares. Many survival-horror games have their edges worn down by repetition. I always found Dead Space to be a fun game, but outside of the first 20 minutes I didn’t find it to be very scary. But Neverending Nightmares depends entirely on its gothic terror, and its tank is only half full.

Its tank is only half full.

The game is most frightening when it is you, the house, and whatever is in it. It feels a little like the game Gone Home’s opening hinted at, but actually inhabited by evil.

In short:  I didn’t need Drake for long. Actually I played about two chart-toppers before I no longer felt the need for his voice as a lighthouse through the darkness. I began to feel comfortable in a horror game, which is a problem. I slept soundly that night.