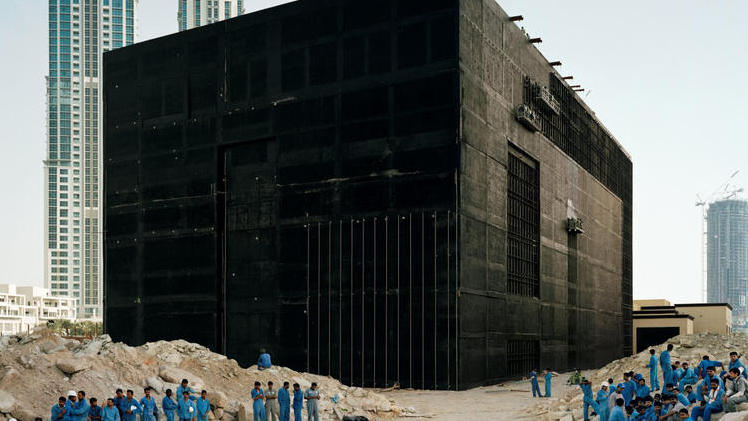 The Barbican Centre, located on Silk Street in the City of London, is one of the largest performing arts centers in Europe. (The smallest is Captain Franko’s Fantabulous Flea Circus in Covent Garden.) Until January 11th, 2015, the venue is hosting an exhibit called “Constructing Worlds: Photography and Architecture in the Modern Age” which, through over 250 works by 18 celebrated artists, seeks to explore the relationships that buildings develop with their surroundings, separate from the hyperfocused spreads of traditional architectural photography.

The display has been designed to communicate to people, not architects. In it buildings are portrayed in situ, not removed from life. Here’s an example from a fellow human being to ground the idea: In college I once attended a lecture given by a famous sculptor. His pieces were large public works, meant for community engagement, but not one of the 30+ slides we were shown depicted someone interacting with or even moving through the installations. Framing the works this way cloistered them in thought from their intended purpose.

The “Constructing Worlds” exhibit aims to address this issue in regard to infrastructure. Instead of shots that are cold and calculated and meant to sell you on a building conceptually, “Constructing Worlds” removes the architect’s ego and lets the world claim the work. The photographs capture the residual energy a building soaks in in the long-drawn presence of people. The exhibit does to concrete monoliths what your grandfather has done to his weathered recliner: Given it a human groove. With millions of people worldwide working in purposefully impersonal spaces, spending hundreds of hours a year in cubicles, maybe it’s time the skyscraper showed a little compassion.

More information and a list of the contributing photographers can be found on the Barbican Centre’s official site.