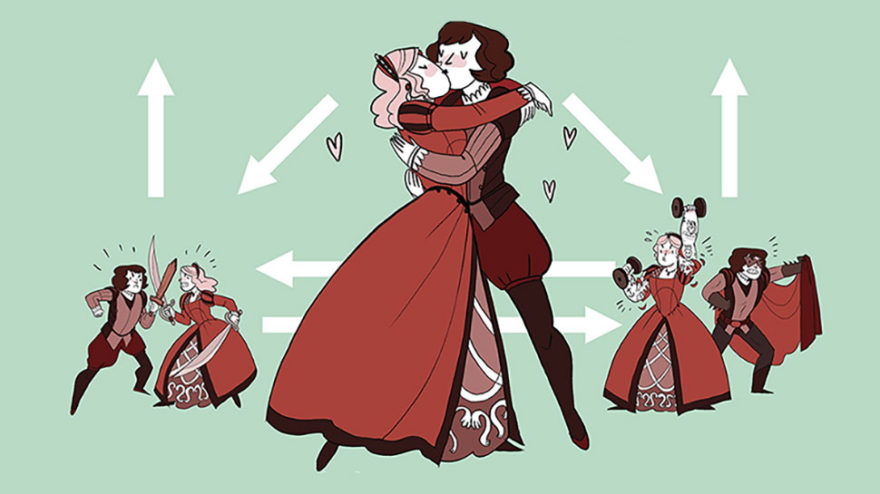 Shakespeare’s Romeo and Juliet has been adapted to numerous genres and mediums since the 18th century and finally we might have an adaptation to rival Baz Luhrmann’s 1996 film, Romeo + Juliet. The classic story has now been adapted into a choose-your-own-adventure book by Ryan North, aptly titled Romeo and/or Juliet. North is creator of Dinosaur Comics, and the writer behind Marvel’s The Unbeatable Squirrel Girl, and was first inspired to tackle Shakespeare’s work with To Be Or Not To Be: That Is The Adventure. That project was crowdfunded through Kickstarter, and by its conclusion had become the highest-funded publishing project ever. Romeo and/or Juliet serves as the sequel to that acclaimed project.

North describes the format of the experience as “book as game”

In both To Be Or Not To Be, and in Romeo and/or Juliet, North describes the format of the experience as “book as game.” This approach, as he told The Mary Sue, was more obvious with the first project, “Hamlet… is structured like a game: get the mission at the start, screw around with sidequests, then at the end kill the final boss and/or die in the attempt and get your entire party killed.” The potential for books and videogames to intersect with one another is immense, and still something being explored in different ways. North’s projects put forward how the weigh up of Shakespeare work should not be limited to whether you simply read or watch it, but rather adds the element of being able to play it.

Romeo and Juliet is notorious for its tragic and frustrating conclusion. The ending was one of the barriers to North’s interest in the play, until he realized that his dislike for the ending didn’t need to be a barrier in a format geared towards choice. As he says “you really get the sense that if these teens had made their choices just slightly otherwise, things could’ve turned out way different.” The book seeks to answer the pressing “what if?” questions we’ve always had about the story, some of which are highlighted by the website: “What if Romeo never met Juliet? What if Juliet got really buff instead of moping around the castle all day? What if they teamed up to take over Verona with robot suits?”

Illustration from Romeo and/or Juliet by David Hellman

The book features some massively talented people, who North co-opted to illustrate the more than a hundred different endings. The ones that got me excited were, Noelle Stevenson (Nimona), Ian Herring (Ms. Marvel), and Randall Munroe (XKCD), though the list will likely include some of your favorite people too, so check it out here.

For ultimate videogame-like enjoyment, it also features a secret unlockable character. Be sure to check out all the places you can grab Romeo and/or Juliet (if we’re lucky it will get a Steam release later like To Be Or Not To Be). And make sure to keep up to date with Ryan North on his Tumblr and Twitter.