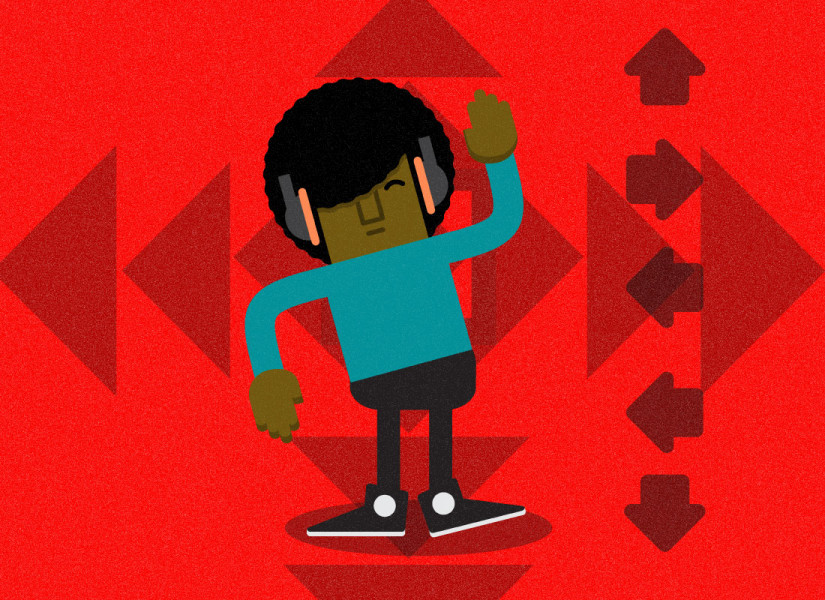 This piece is part of our Future of Genre series. Read more here.

When most people think of music games, the ones that come to mind either involve banging on plastic instruments (Guitar Hero, Rock Band), dancing (DDR, Dance Central), or brutally timed button-pressing (Parappa the Rapper, Space Channel 5). But there are a slew of recent and upcoming games out there that use music in ways that eschew memorization trials and occasionally even put players in the role of producer. These games call into question how we define “music games” and whether the label should be expanded or qualified.

The touchpoint for this movement might be Tetsuya Mizuguchi’s 2001 Dreamcast/PS2 game Rez, which split its efforts evenly between music game and on-rails shooter. Each level is based around the aesthetic of a particular techno track and the landscape visibly pulses to the beat. The sound effects in the game are musical too and can be triggered with a certain timing that occasionally meshes them with the background track. Locking onto enemy targets emits a tight high-hat strike, and the resulting explosions are dainty synth splashes. Categorizing Rez exclusively as a third-person shooter does a tremendous disservice to the game’s musicality, which is just as central to the feel of the game as the movement of the target reticule.

Yet when it comes to placing these games in a genre, the music angle is often downplayed or ignored completely. Valve’s Steam marketplace doesn’t even have a “music” genre category (though their new user-generated tagging system does), leaving games like Dyad, which features music by David Kanaga as a central component, to be referred to as “action,” “racing,” and “indie.”

Similar games, like the upcoming Thumper, are likely to face the same categorization treatment. In Thumper you control a metallic beetle as you careen down a shiny, psychedelic track while executing rhythm-based maneuvers. “We’re trying to do something new rather than hybridize existing games, so genre labels aren’t that useful,” Thumper developer Marc Flury explained. “Our core concept is to take simple step-sequencer patterns, interpret them as audio, 3D space, and movement, and then build gameplay that is intense, physical, and mind-expanding.” Understandably, this doesn’t make for the most digestible marketing pitch, but it’s reflective of the tenuous relationship many game developers have with genres like “music games.” They’re helpful in conveying ideas broadly and quickly, but can lead to generalizations and misunderstandings about what a game is actually about. Flury’s solution for Thumper: “Usually we just tell people it’s a game where you’re a bug and there’s a giant creepy head that wants to kill you.”

Games like Dyad and Thumper prove how arbitrary the distinctions by which the title “music game” is applied can be. It seems like every time someone attempts to lay down some hard and fast genre parameters, another handful of games pop up as exceptions to the rules. Just because a game isn’t a “music game” doesn’t mean it can’t also integrate music into its core design in innovative ways—ways that can be easily taken for granted when music isn’t an expectation going in.

Live-action FMV games aside, videogames aren’t shot on camcorders, they’re drawn and compiled on computers, which means all of the sounds have to be recorded and dubbed separate from the graphics. Think of the “jump” sound in Super Mario Bros or the “!” alert from Metal Gear Solid and compare those to the sounds you make when you leap or are caught by surprise in real life. As with an animated film, this means that developers can assign objects in their games to make whatever noises they want, even music. Rich Vreeland, who created the music of Fez under the name Disasterpeace, thinks there’s “limitless potential” in generating music through a game’s code. “I think a system that could render lots of permutations with meaningful differences, while also managing to sound musical, could really add so much more value to a game,” he said.

Consider Starseed Pilgrim, a dense indie puzzle game with music by Ryan Roth. In the game, you plant seeds and as those seeds grow, they emit different musical sounds depending on type. While you might not categorize Starseed Pilgrim as a “music game” (Roth doesn’t either), musical sound effects are used to characterize key puzzle solving elements. “Since the game is sometimes difficult to grasp in terms of what the player should be doing, it’s important for the player to have something they can enjoy sonically, that they also feel as though they’re creating,” Roth said of Starseed Pilgrim’s music/sound design. “I feel like most players become aware of [the sounds or particular seeds] and they may even get excited when they come across a certain combination of seeds that will be important for them gameplay wise, but also associate the sonic harmonies with a gameplay strategy as well.”

While it’s one thing to trigger musical sounds effects through gameplay, it’s another to consciously create music through those same systems. Few games push players to craft thoughtful compositions outside of the occasional narrowly-defined musical minigame. Furthermore, most music games tend to emphasize the “in the moment” performance over the actual production work of recording music. Rez isn’t about creating a track that you can listen to later; it’s more akin to a live jam session. Part of the issue here is that once games begin to veer too close to audio production software, they’re seen as tools, not games. And when you really just want to use a tool, the game part can be perceived as frivolous, if not an all-out hindrance.

Sentris and FRACT are two upcoming games that show tremendous potential to reverse this perception by turning players into producers through gameplay, not despite it. Sentris is a game that combines block-fitting puzzles with audio sequencing. The game presents you with a blank audio loop in the form of a spinning donut wireframe, dotted with colored rectangular outlines. The object of the game is to drop blocks in from outside the circle that correspond in color to fill the empty spaces inside. The hook is that each block is representative of a musical sound, its color signifying which instrument it is. So while there is a set sequence that must be filled in order to complete a level, there’s also room to improvise and create original, exportable music.

“I want everyone to create their own unique music and be acutely aware of it as they do it,” the game’s designer, Samantha Kalman, told me. “It’s a huge goal of mine to make players aware that the puzzles are all compositional puzzles. I’m trying to not abstract the game mechanics from the act of making music. I’m trying to make them into the same thing.” Kalman isn’t looking to “gamify” music, but rather to bring out the sense of play that comes from experimenting with musical instruments. We play games; we play music. It’s a match so amicable that it seems strange there haven’t been more games trying to do what Sentris does.

FRACT is a bit more mysterious at present; we do know is that it’s a “musical exploration game” featuring simulated synthesizer functions. “FRACT is about exploring a forgotten world, but also about exploring music at the same time—it’s part of the same experience,” says the game’s producer Quynh Nguyen. “As you explore the world and try to make sense of it, you’re also discovering ways to shape sound and make music within that world. And as you continue along, you’re given tools to make your own music and invited to explore your own musical creativity.” Real life synthesizers can be intimidatingly complex, not to mention expensive, but FRACT eases players into it. “We’re hoping that by tying music making into play, it’s more accessible at the beginning—and that hopefully players will get to the point where they feel comfortable creating on their own, outside of the world.”

And who knows, maybe the next generation of music producers will actually get their start not with instruments but with controllers. That is, assuming there remains a distinction between the two.