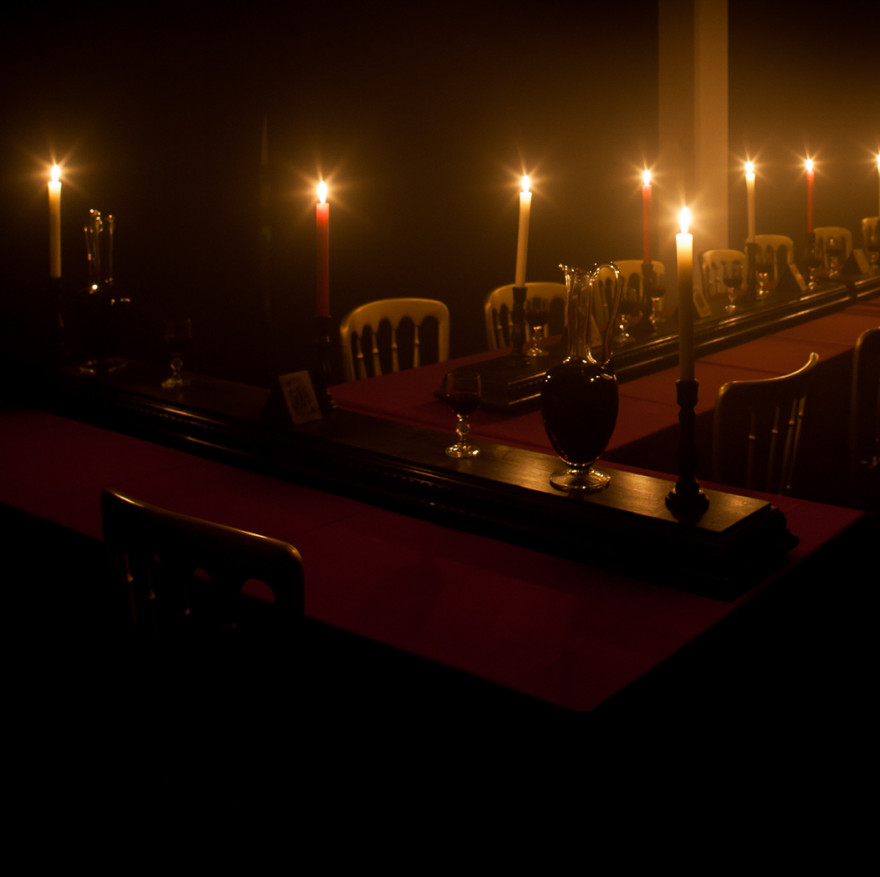 Even with the onslaught of gentrification, the sight of various people turning down a dead-end road off Homerton High Street in East London wearing tuxedos, ball-gowns and cocktail dresses raised a few eyebrows on Saturday night. There are no external indications that anything is happening in the last building on the street but the chances are that you’ll spot another similarly incongruously dressed individual timidly knocking at the door to have it opened by a cloaked figure asking for the password. On hearing it, he’ll open the door just wide enough to allow you in: one at a time. This is the first indication you’ll have that, whoever you might have turned up with, you are in this for yourself.

Betrayer’s Banquet is a dining experience based on the classic Prisoner’s Dilemma. It makes a meal into a game where each small course you are served will be defined by how well you’ve been playing. It’s also about envy. You can see what other people have higher up the table and you want that. It fully embraces, even specifically encourages, the pleasure in betraying your fellow man. Betrayal is the core mechanic of the game.

You pick a card at random. This will define your rank at the start of the game (King being highest). Your position will then define the kind of food and service you get: from the barely edible to the sublime. If you aren’t happy with your place in this world, you need to play a game of trust against the diner opposite you. The game is simple. Play the goblet to cooperate and the dagger to betray. If you both play goblet, both move up five places. If you both play dagger, both move down five places. If one of you plays dagger and the other plays goblet though, one player has betrayed the other and they move up ten while their victim moves down ten.

It’s a simple structure but one that allows space for all types of players and tactics, which means that it is totally accessible and enjoyable for both gamers and non-gamers. Of course, while tactics are valid, some are more valid than others. There are the killers, the betrayal-happy overreachers, who start betraying straight away and are soon labelled as untrustworthy as a result, meaning nobody will ever cooperate with them. There are those who never have the courage to betray (though by the end of the game, these are few and far between). There are the explorers and socialisers who are curious to talk to different people and try different food and may betray or even let themselves be betrayed even in order to do this. Then there are those thinking a long game, the achievers who have their eyes on making it to the top by the end of the game.

You need to keep playing and, sooner or later, you’re going to have to betray.

Players that start at the lower end of the table have much more motivation to move up and move up fast; this is where the friendly, cooperative atmosphere that the game inevitably starts with breaks down first. The players higher up are already getting decent food so are much more likely to be complacent but, unless they act at some point, their positions will be gradually eroded and they will find themselves slipping down the table, like a cross between Tetris and musical chairs. You need to keep playing and, sooner or later, you’re going to have to betray. After all, if everyone cooperates, nothing changes.

The question of motivation is an interesting one. The chances are that you will find yourself opposite a stranger. You may find them fascinating or you may be bored to death by them. If you cooperate with them, you might get slightly better food but they will still be there so your experience is going to depend on how you feel about them. It’s not just the food but the company that you might want to change. Then there’s the possibility that you are playing the game for the game’s sake. There’s no particular advantage to being the King or Queen compared to two positions down: you get the same food. But the title of King or Queen! There’s a lure.

When you play your move, the serving staff whisper in your ear, encouraging you to betray and calling you a coward if you cooperate. If you do betray, they congratulate you. So the approbation felt by the community of players is counterbalanced by the validation from the external elements of the events.

I felt bad for a second, then I felt awesome.

However, the most effective strategy seemed to be to play the middle ground: to time your betrayal just right. Like many games, you need to plan your attack, know the lay of the land, choose your moment and, when the time comes, take no prisoners.

I managed to end up at the top of the table by betraying a very pleasant dining companion called Kenneth. He and I had been opposite each other several times and, when I first said that I’d cooperate with him, I meant it. When the moment came though, I looked at Kenneth’s smiling, trusting (possibly slightly inebriated) face and decided: nope. I felt bad for a second, then I felt awesome. Those of us in the highest ranks at the end of the evening were given a scroll unlocking access to the next level. For the victorious, the journey continues. For everyone else, there’s always next time. Sorry, Kenneth.

The next Betrayer’s Banquet will be on the 23rd November at a secret location in London. More information at www.betrayersbanquet.com

Images via Will Edgecombe