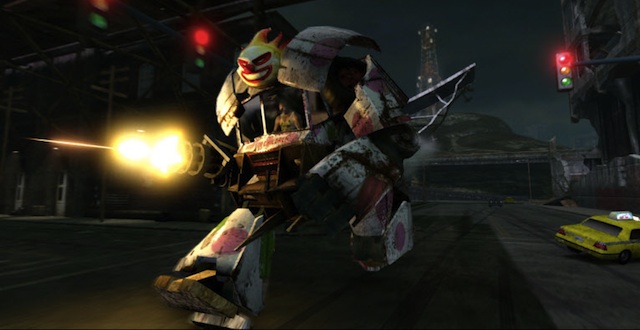 Here’s a game with a legacy. The Twisted Metal series is known for two things: vehicle combat, and being the oldest-running franchise in PlayStation history. Now in its 17th year, this new iteration walks down two divergent paths—the first, to reestablish the series for expectant older fans; the second, to reinvent it for potential new ones.

And perhaps that sense of conflict is what best summarizes the newest Twisted Metal. Here we have a game beside itself, pulled into two directions. Does this make it a necessarily bad game? No. Parts of it are fantastic fun. But the statement it seems to wish to make is not as assertive as its creators would like it to be.

Twisted Metal has long been a single-minded game: Blow shit up with your car. Destroy other players with your vehicle, using the arena, specialized weapons, and pickups to your advantage. This new one reintroduces these old stalwarts, with some new additions that deepen the strategic pool. Talon the helicopter, for instance, carries with it an airborne vantage point and a nifty magnet for picking up and flinging other vehicles.

Still, I found myself resorting to a couple of standards: the Junkyard Dog, a tow truck with a hilariously morbid cab-tossing special attack, and the police SWAT vehicle Outlaw, which combines the grace of speed with the fortitude of respectable armor.

The mid-range vehicles—like my two standards, or even the Vermin exterminator van or the Sweet Tooth ice cream truck—seem to suit most situations. They are not the fastest, or the strongest, or necessarily the most weaponized. None of their aspects is over- or undervalued.

Apparently, these vehicles have all been balanced. It’s a matter of preference which one you use. So I give others a try. Well … Juggernaut is quite strong. Bulky, but strong. In fact it’s fine until you butt heads with a corner. Hang on, guys. Wait. I have to back out.

And I cannot, for the life of me, see any reason to use Reaper, the motorcycle. If I must rely on speed, I’d rather pick Kamikaze, Crimson Fury, or even Death Warrant. At least I’ll have enough weight not to get myself flung across the screen. Not entirely, anyway.

This is where Twisted Metal seems to be confused as a game: the strengths and weaknesses of each vehicle are made glaringly obvious during the campaign. The campaign is structured as a series of nodal gameplay encounters, and I can replay each unlocked node at my leisure. Each of the interlocking stories contains one boss that offers something relatively unique. Otherwise, the elements of each node eventually get jumbled and recycled as the campaign wears on. Sometimes all I have to do is defeat a quota of enemies in good old-fashioned Twisted Metal deathmatch combat. I pick a selection of vehicles and away I go. Freely in the environment, I can swap or heal my car; I can play recklessly; I can use the nooks and corners of my map and target my selection of enemies. Those little, fast cars aren’t very tough. Buh-bye, Reaper. An incendiary flurry of car parts fills my eyes. I giggle maniacally.

But the next node is a death race. I need to get to the end to detonate a bomb. No need for combat tactics here. I just need speed. Suddenly those piddling little fast cars seem rather desirable. The same race, almost unwinnable with my Junkyard Dog, suddenly becomes cake with Crimson Fury. Rather than balance the cars to handle any environment given adequate skill, certain game types are created to highlight certain vehicles.

I can accept this, to a certain extent. The game wishes to show itself off. But as I play, it begins to feel like a forced encounter. When I must do anything more specific than play recklessly—win a race by hitting checkpoints; direct a missile or a bomb at a boss; maneuver behind or beneath a large vehicle to annihilate it; follow a moving “electric cage” around a terrain made primarily of ice—Twisted Metal becomes a struggle based on chance; the hope that some fluke of artificial intelligence won’t land me in an unpredictable side collision, throwing me completely off the race course; the hope of picking up tricks after a series of failures, not to strategize, but to keep the game from working against me as much as I can. This is more a matter of luck than skill.

There is a very entertaining game at the core of Twisted Metal, but it’s shrouded in expectation and superfluity.

But credit where credit is due. The developers have tried to humanize the story, mainly by interweaving the stories of three of the faction leaders: the melancholy Mr. Grim, the hysterically vain Dollface, and the psychopathic mascot, Sweet Tooth. (The Preacher’s influence wafts gently but pervasively in the background). But this also reflects Twisted Metal’s weird inner conflict. Some cinematic and narrative elements recall the darker strokes of Twisted Metal: Black, while retaining the pulp B-movie feel of, well, much of the franchise. But is this intentional? Are they being earnest? Am I just being set up for a sequel?

There is a cognitive dissonance here. This is a series revamp, after many years in the shadows. This is Twisted Metal trying to begin anew. But with it comes almost 20 years of baggage. When Calypso, the game’s most infamous villain, introduces himself to Sweet Tooth, a part of me understands that this is aimed at new fans. If this supposed to illustrate their first meeting, why is an event so entrenched in series history waved aside with a line of dialogue? It’s almost as though the game begrudges its own backstory.

This is not a game of precision, although it sometimes requires very precise decisions. This is not a game of narrative clarity, although it appears to want it. Once I push past the new veneer, I get to the game’s old heart. Local or online deathmatch or Hunted games are exhilarating. There is a certain giddiness to stealing another player’s kill, to ganging up on a friend, to laying traps—or to just go for broke. While my own friends fight amongst themselves, I stockpile weapons and emerge from the crannies of the map and shoot like hell. I find my own paths among the chaos. There is more complexity to the controls, which take a little bit of time to master but are not altogether unreasonable. And such mastery only opens doors to greater opportunities for wanton—or deliberate—destruction.

There is a very entertaining game at the core of Twisted Metal, but it’s shrouded in expectation and superfluity. As a standalone multiplayer game, Twisted Metal might have endeared itself to me a little more deeply, but would that have justified its great return? Would that have done much to distinguish it from its siblings, even with the swanky new features and visuals? I’m not sure. Twisted Metal, despite all the things that make it raucously fun and engaging, doesn’t seem sure either. This is a game stuck at an intersection, screeching for relevance, hauling the cargo of its past.