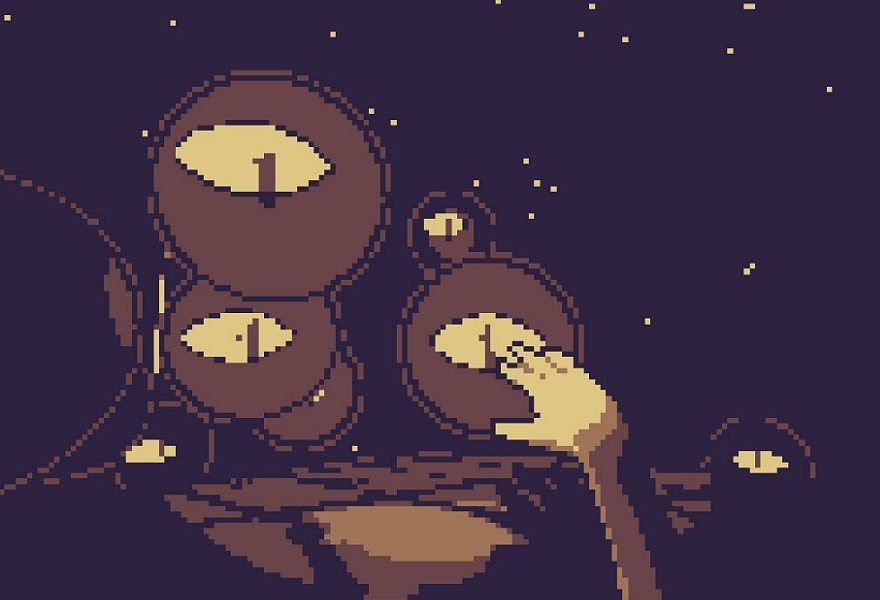 There are particular games that can only exist within the confines of the technological limitations of the time they were created. Missile Command (1980) feels anxious in its simplicity: the silence of surrounding the explosions of the missiles reminds you that, eventually, no matter how hard you try, all the cities you are attempting to save will be destroyed. On the other hand, the 2007 Xbox 360 remake of Missile Command added techno music and other small tweaks that, together, deeply obscure the Cold War-era fear of the original.

the anxiety heightened by its use of Game Boy graphics

An entry into the fifth GBJam, You’re In Space And Everyone Wants You Dead, creates a similar atmosphere to the original Missile Command, the anxiety heightened by its use of Game Boy graphics. It’s a 3D platform-runner in which you frantically avoid horrifying eyeball monsters and jump between small planets, making the most of their gravitational pull. You can also try to throw blocks at the eyeball monsters to rack up more points, but this is secondary to desperately trying to get away from them. The sound is minimal, the colors are minimal, and the squares of terrain you run over blend together as the monsters loom ever closer.

You’re In Space and Everyone Wants You Dead feels like a game that exists best with the constraints placed on it by GBJam. The designers were required to keep the original Game Boy screen resolution, and have no more than four colors. The result is an austere landscape, where you can easily get lost in the process of trying to flee the creatures giving chase—achieving a similarly chaotic horror as Devil Daggers. The terrain that flows beneath you, around you and, at times, away from you, creates an almost claustrophobic feeling, despite the fact that you’re running through space. This makes the monsters approach seem even closer.

The game certainly doesn’t seem to be made as a horror game, but it serves as a reminder that simplicity often creates tension and a memorable atmosphere. Sure, a disgusting disfigured monstrosity chasing you is scary, but the knowledge that no matter how hard you run, eventually you will fall, is intense in a different way. You’re In Space and Everyone Wants You Dead is a runner that, with it’s simple planes and baddies, makes sure you want to run.

You can download You’re In Space and Everyone Wants You Dead here.