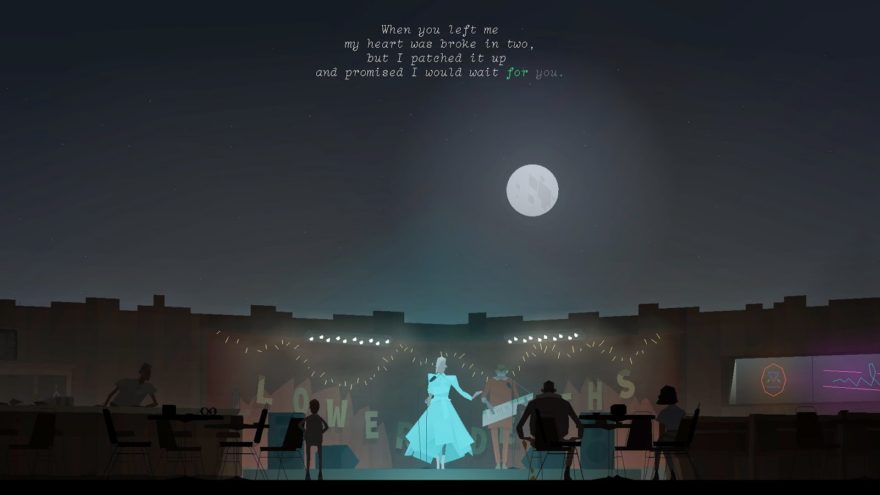 Cardboard Computer has released a new track from an upcoming installment of Kentucky Route Zero and maybe it contains important information about what is to come in the game. Maybe—OK, let’s be real—it probably doesn’t. But maybe it does, and that’s enough hope to keep the whole operation going.

“River” is, as you might expect, an atmospheric track, filled with billowing sounds and distant noodlings. It doesn’t wash over you; you sink into it. Of course, this isn’t exactly music for you to listen to—at least not in this context. How often do you play the atmospheric background to a videogame with your eyes closed or your screen turned off? But that’s what Cardboard Computer is challenging you to do with “River”. Frankly, you have no other choice. And while this may not be the optimal way of listening to the song, it works well enough. “River” conjures up mysteries: what are all these sounds doing together? Why are we even here?

We are here for the mystery. Kentucky Route Zero compels players to engage with mystery and think about what is lurking around (and below) every corner. It isn’t exactly paranoia, but it is a form of fandom that encourages you to consider every strange possibility. Therein lies the fun. Thus, a week after “River” came out, there is speculation that it’s a slowed down version of another song, “Julian.” Fans have tried to figure out what interactions might take place atop this atmospheric background. Maybe they’re right. Probably not, but maybe they are. It doesn’t really matter. Mystery thrives on this kind of speculation, on this kind of curiosity. “River” tells you very little, which, it turns out is the perfect amount from which to create an entire story.

You can listen to “River” right here.