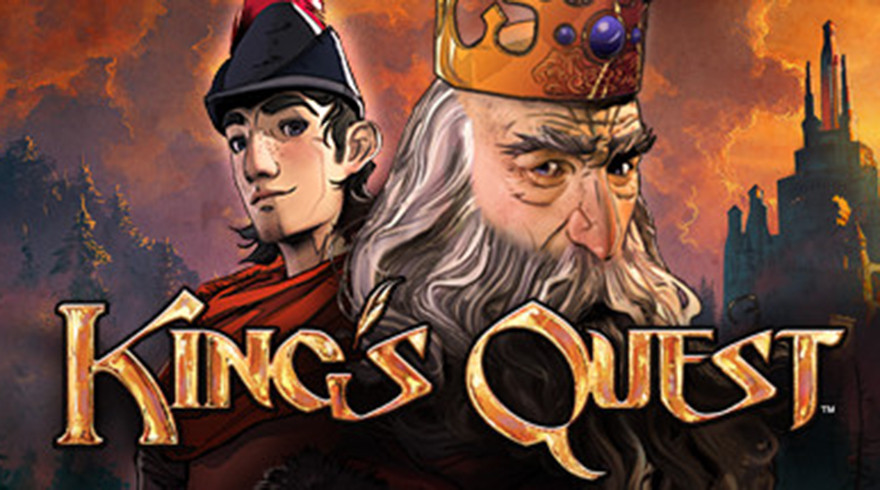 Few literary genres merge quite as well with videogame narrative more agreeably than the Bildungsroman, a novel about a character’s coming of age. It is a well-trod path to recount the story of a character’s formative years. Fielding’s Tom Jones, Brontë’s Jane Eyre, Joyce’s Portrait of the Artist as a Young Man, and dozens of other reading-list notables fall into the bildung camp, but a videogame can marry the story of a character’s learning about herself and the world she inhabits with the player’s developing knowledge of the game. Such is the promise of Sierra’s and The Odd Gentleman’s new King’s Quest resurrection that recounts the adventures of Graham, a knight errant and future King of Daventry. If the first episode, “A Knight to Remember,” is anything to go by, we have a lot to look forward to in helping him become the king the land needs.

The game begins with a simple but charming framing device. The elderly King Graham (voiced wonderfully by Christopher Lloyd) narrates tales of his exploits to the excitement of his granddaughter Gwendolyn. On the one hand, this setup seems like shorthand justification for some antiquated game designs, and “A Knight to Remember” is certainly old-fashioned. On the other, its look back at the hardships of Daventry before its golden age reveals an awareness of this type of over-romantic view of the past. King Graham, for all the wonder that unfolds on his youthful self, never dismisses his present in favor of an idealized past—even if the game seems to look at adventure game history with a wistful longing.

Here is where I have to watch myself, though, so I don’t fall into the trap of lauding old design for the sake of some grassroots, good ‘ol days reminiscing. I’m always skeptical of nostalgia as a selling point, but damn do I love old adventure games. Sierra’s Quest for Glory series was my favorite, followed by LucasArts gems like Full Throttle and Sam and Max Hit the Road. So, when I encountered this new King’s Quest’s lapses into adventure game obtuseness, I admittedly did so gleefully.

A slight departure from modern adventure games that have streamlined the adventure game template, King’s Quest a bit too eagerly looks backward on the genre’s history. The game’s lack of fast travel and quest tracking meant I often forgot which character needed what item as I wandered aimlessly across Daventry. Nevertheless, I immediately fell back on old habits, making notes with pen and paper and drawing connections between tenuously connected items and their functions in the game. I was more than game for it, though I do not expect everyone will be.

“A Knight to Remember” consequently feels like a chapter at odds with itself, telling the story of a young man’s quest to grow up while relying on throwback designs that haven’t aged all too well. This first chapter, nevertheless, hits its bildung narrative notes so well that I hardly ever wanted an easier answer to some of the problems (though, to be honest, none of them were particularly difficult). Graham deals with loss and victory in stride, raising the stakes and injecting silliness when appropriate. Quests such as settling a bridge troll labor dispute or wandering through a dragon-occupied underground cave system afford Graham the opportunity to learn valuable skills in both combat and negotiation that will shape him into the king he will eventually become.

Exactly how the story will pan out, of course, remains to be seen, but this first chapter builds a solid foundation. Solving puzzles through wit, violence, or sometimes just dumb luck will presumably ramify throughout the adventure at large, though it is hard to tell at this stage how deeply such actions will affect Graham’s character arc. King’s Quest seems confident in its goal, however, of delivering a fairytale communicated with a painterly art style and exceptional voice acting—the best of which comes from the elder King Graham’s groan-worthy puns and his granddaughter’s reactions. As much as “A Knight to Remember” establishes Graham as an excitable teenager who has a long way to tread before becoming king, it introduces a wonderfully realized world for him to eventually rule.

For the moment, King’s Quest remains caught in a particularly strange-yet-familiar space, halfway hearkening back to an older era but seemingly aware that it was a time that needed improvement. That the game neither meanders into pseudo-hagiography for its earlier incarnation nor abandons the trials that have led to its current stylings shows promise for how its future episodes will unfold. Perhaps its sentiments are, indeed, a bit conservative, but so is the bildung narrative it strives to tell. In that respect, both Graham and the game he leads have a good bit of growing up to do before either are worthy of some sort of crown. For my part, I’m eager to see how they both get there.