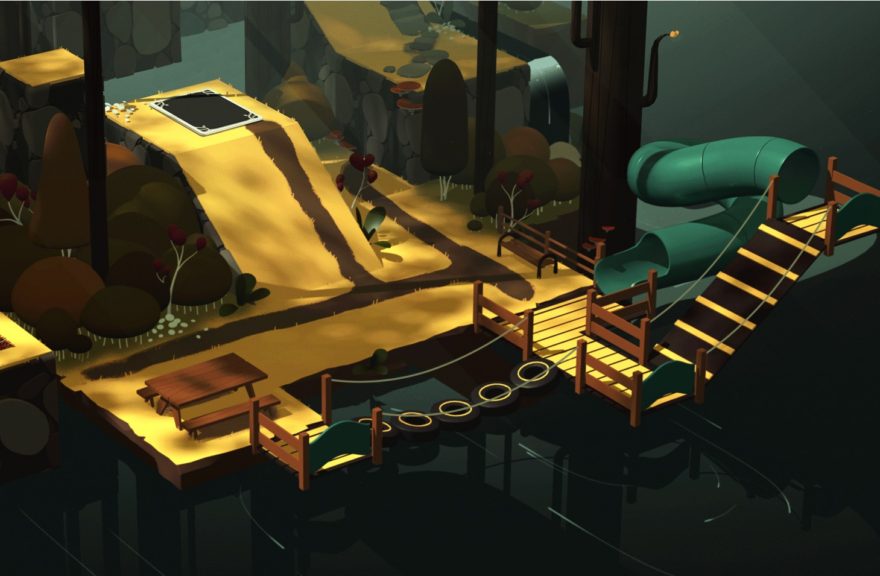 Toronto-based app developer Snowman has been having a delightful amount of success lately. Its endless runner (endless snowboarder?) Alto’s Adventure (2015) is a lighthearted, beautiful game that seemed to take great joy in doing backflips over towering mountains. Its popularity was as much due to the love and care given to the art as to the air tricks you could perform, and it would be reasonable to expect that a follow-up would share at least some of those traits. It’s surprising, then, that Snowman is preparing to do an about-turn towards melancholy with the new game Where Cards Fall.

a “bittersweet memory of adolescence”

According to collaborating designer Sam Rosenthal in conversation with The Verge, the game is based on the collapse and rebuilding of a house of cards, which has inspired him since his college days. Rosenthal’s studio The Game Band is developing, while Snowman are chipping in in areas like art and design. Unlike Alto’s Adventure, Where Cards Fall is narrative-based, and you can interact with its characters through the process of building and deconstructing the houses of cards. Rosenthal describes it as a “bittersweet memory of adolescence”: it’s a far cry from hostile, but there’s something unnerving about it all the same.

When Where Cards Fall was announced in March, its sole accompaniment was a picture of a a house that was starkly outlined by shadow and hovering in space. It looks nothing like the cool, pastel colors of Alto’s Adventure, again underlining the fundamental differences between the games despite the shared teams. But look at the first teaser, listen to the soft sounds of the cards falling in the forest, and their connection starts to make sense.


Despite the games’ differences in their ideas of play, Alto’s Adventure was praised highly for its beauty—it even has a photo mode—and is the area in which Where Cards Fall seems to be following in its footsteps. Trading mountains for forests, we catch glimpses of sun-dappled pathways and cards drifting through waterways as flowers grow on the shores. A few cards fall from the sky, shuffle into shape, and construct themselves into a small, blinking house. It’s not alpine, but it’s just as pretty to look at.

Unfortunately, that teaser is just about everything we know about Where Cards Fall. Snowman and The Game Band are tight-lipped about platforms, and all that’s being said about the release date is it’ll be in 2017. It looks like we’ll just have to be patient, and see where the cards fall.