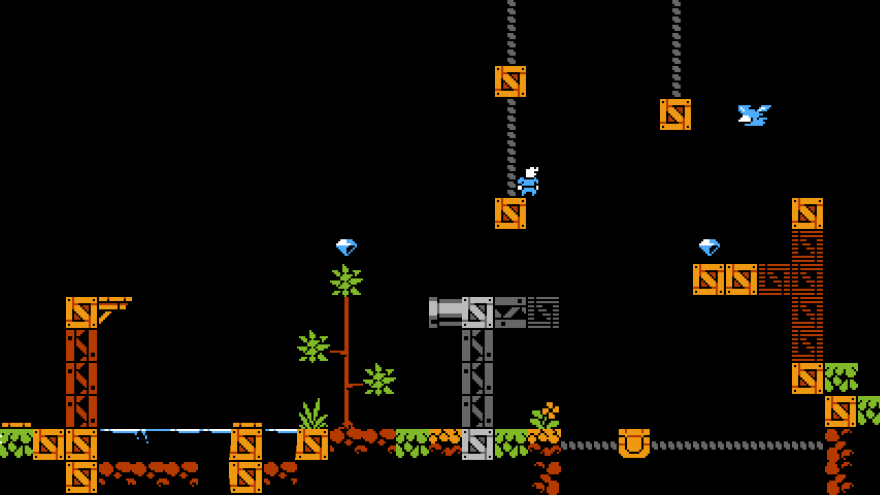 Game jams are filled with sleepless nights. Designers and artists gather for a short period of time, like a weekend, then work non-stop to create something playable in that limited time frame. A game jam is an intense and challenging way to create a game. And yet, it’s how many fantastic videogames are born, like Surgeon Simulator (2013), SUPERHOT, and Nuclear Throne (2015). One of the latest game jam ideas turned retail release is Don’t Crawl, from Nick Belorusov and Vadim Dyachenko

“Ideas that spring to mind at 4AM when waking up for a game jam, are rarely truly original,” Belorusov explained when I asked him where the idea for Don’t Crawl came from. He wanted to see how the multiplayer elements from Crawl would work in a 2D platformer. And when he pitched the idea to Dyachenko and asked for his help, Dyachenko agreed. It sounded like it could be a good idea for a game. “Seems like I wasn’t wrong!” Dyachenko said.

Dont’ Crawl offers two ways to play. Like a traditional platformer, you can play as the main character—the one who runs and jumps through the level, avoiding any hazards in their way. But other players take on the role of the enemies and traps in the world. So, as one player tries to jump across a gap, others can try to stop them. That’s the basic idea behind Don’t Crawl: a group of players trying to stop one player who is attempting to reach the end of the level. Think Super Mario World (1990) but the Goombas are being controlled by other players over the internet.

As I spoke to Belorusov and Dyachenko it emerged that they both love Spelunky (2008). Belorusov is a big fan of the popular platformer and even though he is only 18-years-old he described a feeling of “nostalgia” for old-school platformers, like the Megaman series. Dyachenko is such a big fan of Spelunky he actually created a mod for the original release of the game. This mod allowed two people to play cooperativley. As Dyachenko explained “Spelunky in general sets high standards for what a game of it’s kind can be, and very few games can stand [in] line with it.”

The biggest issue with Don’t Crawl‘s online components that needed tackling was connectivity. “It is commonly said that you can’t make online multiplayer in a fast-paced game like this,” Dyachenko. His aim was to prove that statement false, ensuring that Don’t Crawl‘s online multiplayer wasn’t brought down by lag. And for those players who don’t want to play online, Belorusov and Dyachenko were quick to point out that Don’t Crawl also supports local play on a single PC.

Don’t Crawl has come a long way since being an idea born at four in the morning. The game now has a level editor and will support Steam Workshop. Belorusov and Dyachenko aren’t done working on it, either. Don’t Crawl is currently available in Steam Early Access and will continue to receive updates. They’re excited to bring Don’t Crawl to Mac and Linux in the future.