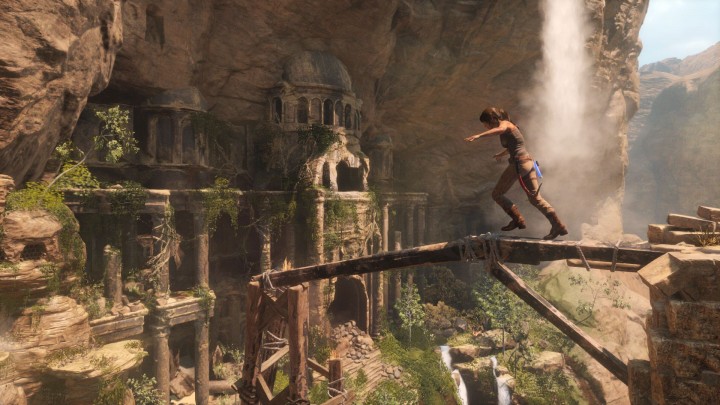 Finally, some tomb raiding for the Tomb Raider! The latest footage of Rise of the Tomb Raider direct from its presentation at Gamescom gave fans what they’ve been yearning for since the 2013 reboot: Lara Croft scaling crumbling walls in exotic, undiscovered locales like the good ol’ days when breasts were triangles. The footage reads like a response to the critics of the first reboot who cited a distinct lack of the series’ titular activity. In Crystal Dynamics’ defense, though, they did kinda address that in the game, with Lara’s self-aware declaration that she “hates tombs.”

Yet by the end of the 2013 reboot, fans were made to wonder how Lara Croft would come to love the very thing that left her shell shocked and sans father figure. The new footage answers that question straight away (and repeatedly throughout): Real Daddy taught her, of course! “There was something in dad’s research about this,” she says upon reaching the speculated location of the legendary tomb she seeks. Moments later, Lara affirms that “this is it. Dad was right.” Then, when Lara discovers the unmarked entrance to the long forgotten tomb, she gets dangerously close to having an actual opinion of her own. “It’s amazing! …If only dad could’ve seen this.”

It becomes clear that her father’s recorded notes will at least partially replace the usual expository audio logs and letters scattered around levels in the previous game. But, presumably, her dad’s unfinished research doesn’t just help Lara with practical things like locating the hidden corpses of lost prophets. He also appears to be a big part of her emotional motivation for rolling her (figurative) sleeves back up and getting back out there following the traumatizing events of her previous expedition. After surviving a car crash, gun fire, and a swarm of scorpions in the clip, a very battered Lara finally discovers a sanctuary no man or woman has set foot on in centuries. “Stunning,” she sighs. Then, like a nervous tick: “We made it, Dad.”

Lara Croft’s parentage has varied throughout the decades, reflected in her varying personalties throughout every iteration. In the original Tomb Raider, the Crofts raised their daughter to be a proper British socialite complete with a foreign finishing school and family estate. To their shock and horror, their perfect little aristocratic princess rebelled, leading to Lara’s eventual disownment and stone cold badassery. In Tomb Raider Legend, we see a story seemingly similar to the one being portrayed in this recent reboot, with father Richard Croft painted as a brilliant but eventually discredited archeologist. Tomb Raider Anniversary depicted a similar background, with a few minor details changed or exaggerated.

maybe Lara’s mom does do more than just disappear

Unsurprisingly, Lara Croft’s mother tends to be glossed over and/or conveniently snuffed out early on in her lifetime. Like many other games, the mother is escorted off stage like a drunk at a standup show. While the paternal aspect of Lara’s parentage is frequently highlighted and explored, we’ve never seen a maternally influenced Croft origin story or even a pseudo mother figure (and no, Natla does not count.) Since the previous game featured such a female-centric narrative, with the core relationship between Lara and best friend Sam fueling most of the drama, I had hoped this iteration of Lara might be at least a bit more in touch with her maternal side. And, of course, we don’t have the full story yet—and, who knows, maybe Lara’s mom does do more than just disappear early on in her origin story. But this new footage doesn’t make that hope look very promising. The emphasis on the paternal figure has been there since the 2013 title, too. “You can do it Lara,” says Conrad Roth, her most prominent parental figure. “After all you’re a Croft.”

Presumably, Crystal Dynamics has a practical reason and vested interest in imbuing Lara’s story with as much paternal crap as possible. As Ron Rosenberg told Kotaku at E3 in 2012,  “When people play Lara, they don’t really project themselves into the character. They’re more like ‘I want to protect her.’ There’s this sort of dynamic of ‘I’m going to this adventure with her and trying to protect her.'” Hm, then I wonder who the designers assume their presumably male audience will want to identify with. An omnipotent father character must feel natural, since Rosenberg believes players think of themselves more “like her helper. When you see her have to face these challenges, you start to root for her in a way that you might not root for a male character.”

As we know, the male imagination is too limited to possibly entertain the notion of identifying as a female videogame character. Being a member of the female species, I know myself that I could not imagine identifying with any of the countless male protagonists I am forced to spend hours inhabiting in videogames on a daily basis. It is simply beyond my mental capabilities, since men have wee-wees and girls have all those girly bits. Since our genitals are different, it’s impossible to see characters of the opposite sex as human first, and gendered second. Simply impossible.