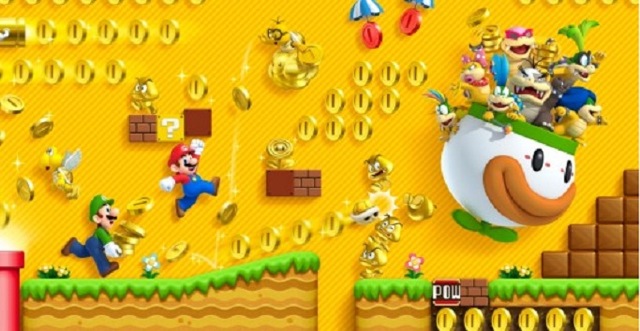 The block asks me a question; I answer with a jump and a punch. This is the first coin. A single hit, a rush of dopamine—pa-ding! That two-tone chime, an echo of itself, the sound of finding something once lost. I’ve done this before. A sentient fungus waddles forward and I stomp it. Coins hang in the air, directing my line of movement through a familiar candy-coated exotica. Musical trampolines bounce me skyward, dancing quarter-notes trailing behind like jetstream: an acknowledgment of action-as-rhythm, playing-as-music. Then I jump and punch another block stuffed with coins until it turns golden. I jump again and the block covers my head. No—my head is the block, with a block-nose and block-mustache. I take a step and a coin erupts from my golden block-head. Then I begin to run.

The “New” Super Mario Bros. games began in 2006 on the Nintendo DS, the first brand-new 2D Mario platformer since 1991’s Super Mario World for the SNES.  Fifteen years of anticipation brew a potent brand of forgiveness. The DS game was too easy, with a non-descript plasticine art design and music that veers far too close to annoying for a series with perhaps the more recognizable theme in all of gaming. And yet none of this mattered, because: Look! I’m eating mushrooms and jumping atop flagpoles, just like I used to. The Heart Grows Fonder, as they say.

The game went on to sell over 20 million units. Three years later, New Super Mario Bros. Wii brought the formula home to critical and sales success. Three years after that, this sequel arrives on Nintendo’s new handheld, looking suspiciously un-new. The problem with a winning formula is just that – the product comes from past and known results, repeated and perfected, until inspired creativity gives way to formulaic, calculated risk.

Which makes this question, the one that kept popping into my head as I played, all the more surprising: What if New Super Mario Bros. 2 is the best 2D Mario game of all time?

The reason you play this game differently than any Mario before is a lesson in psychology, an experiment of the absurd: The challenge to collect 1,000,000 coins.

A small counter on the bottom of your screen accumulates every coin gathered after every level, whether you reach the flagpole or fall in a pit. All play is reward. (Pa-ding!) The simple mechanic of collecting as many coins as possible alters the entire raison d’etre of playing a 2D Mario game. In NSMB2, your goal shifts from the basic go-right-and-don’t-die level of success to a more rabid need: soak up every dubloon, medallion and nugget from each level’s many nooks. To speedrun with athletic grace is no longer a point of pride, but a wasteful apathy, a missed opportunity. If previous 2D Mario games were a triathalon, this one resembles an excavation site: dig, scrape, brush for every last gleaming coin until you’ve found all that you can. Such a quest smacks of marketing hokum. But the challenge, ridiculous and extraordinary in its simplicity, tempts the player with a dangled, inevitable carrot too palatable to ignore.

All play is reward.

New Super Mario Bros. 2 is a confident game. Most titles boast of surprising visuals, newly arranged music, some kind of flash or sizzle or pop. This game neglects nearly all staple ingredients of a contemporary full-priced title—the glitz, the wow—in an era when videogames are constantly being questioned of their value. Released on a system capable of glasses-free 3D, the developers opt out of the easy choice. Push the system’s 3D slider switch up and, instead of a gradually increasing depth, the backgrounds blur into fuzzy approximation. All attention is focused on the foreground. The part where you actually play. We can show you only half of the game, the half that matters, because that half is good enough.

Subsequent worlds do not shock you with ingenious fantasy not yet explored in fiction; these locales are the same grass, sand, ice, lava environs you know. Nintendo’s designers have faith in their ability to construct obstacle courses with such laser-focus acuity that the very action of moving through them will delight the player, window-dressing be damned. The choice is so backwards and rare that the recycled audio-visual experience appears lazy. But then I run through World 3-1, hitting a switch that turns all the enemies gold; a series of fish jump out of the waters below, coins trailing their parabolic arc, and my timed leaps trace their glowing evacuations with pinpoint accuracy and I kick a now-golden Koopa Troopa ahead of me, new coins following its path while see-sawing platforms elevate and descend the spinning shell into a calvacade of floating winged turtles. I jump through it all, untouched, energized. What may look like chaos is, in fact, the chiseled work of a thoughtful creator.

Twenty-seven years of lessons learned provides the kind of foundation few if any modern titles have. If any game deserves the use of “terroir” to describe its nuances, this is it. Details and callbacks spring forth with automatic sprinkler regularity: the loading screen ditty is the original Super Mario Bros. overworld theme; the final boss sequence mimics the first time you sprinted through that daunting castle and faced off with a spiny tortoise allegic to lava; giant ghosts, always paralyzed by your glance, now peek out from under ghost hands and creep toward you. Expectation is matched and underminded, toyed with and catered to. The end result is good for a first-timer, but tenfold as rich for those coming back for the eighth or one hundreth time.

But is it the best? Our opinions of greatness are often informed by the naivete of youth, polished by hindsight the way drink softens the grisly features of would-be one-night lovers. Many deem Super Mario Bros. 3 or Super Mario World the best of the renowned series. I could argue the same. But the idea stems from an inital playthrough in 1990 or 1991. This critic was nine or ten. We prepubescents enjoy many a thing that leaves a residue of fondness regardless of present-tense taste. (I once loved A-1 Steak Sauce above all else; twenty years later, the zippy marinade feels over-spiced, like it’s trying too hard.) I don’t ask that you dismiss SMB3 or SMW. I ask that you consider the experience of the ten-year-old, circa 2012, and how much their opinion matters versus your own.

In 1950, scientists Leon Festinger, Stanley Schachter and Kurt Back found that the highest factor in predicting friendship between potential mates is not surface level looks or intelligence, but nearness.  This was soon known as the Propinquity Effect. As the first retail Nintendo title to be available for download on day one alongside the physical shelf copy, NSMB2 wins on accessibility alone. It is the neighbor next-door whose cuteness stems from shared elevator rides, even if her haircut brings back memories of the ’80s. Download this game to your 3DS and you’ll never blow on its contacts again.

The genius of any Super Mario Bros. game stems from your character’s momentum. Push the direction pad right and you walk right. Hold the “Run” button and you’ll walk faster, before breaking into a run. Now let go of the buttons. Mario will still be running before slowing to a walk, taking his last step, and standing still. Waiting to run again. This was present in the original 1985 release and has featured in each subsequent game. But 2012’s version elevates the mechanic beyond the game-world and into the player’s own.

It took this reviewer seven hours and four minutes to defeat the final boss, though two entire worlds remain hidden and a third just unlocked. My coin counter reads nearly 56,000: In 1991, a respectable number, worth 5,600 extra lives. Today? An anemic savings to be chuckled at. The game asks of me greatness, and I respond with emaciated limping. 944,000 coins await. Can I do it? Will my momentum sustain me?

Here is where the path forks. You can put down this game and move on to the next, the one with unseasoned roots, the one deployed with oily fingertip tapping, the one asking for daily dollar investments. Or you can keep playing and continue that marathon to dopamine-infused glory.

But is it the best?

The million coin goal requires participation. Succomb to its wiles and the near-impossible endpoint beckons like a siren auctioneer. You need to attain this arbitrary abstraction. But only if you choose. Like all art, the viewer/player is a participant, choosing to engage or not. Many will ignore NSMB2’s ultimate challenge and leave with a pleasant if familiar aftertaste. Give in, though, and the game becomes a gauntlet of persistence, a portable Chinese Water Torture device for hydrophiles. A blissful race to infinity.

Now everything is gold. A windchime on my back porch pushes in the breeze, its resultant jingling the sound of Golden Mario shimmering with flecks of mineral power.

The toaster oven timer goes off, its prompt signal the same ding heard when passing over a coin, now heard a hundred times, a thousand, ten thousand, one hundred thousand…

Perhaps one day, dozens of hours later, playing the same courses over and again, sharing data with strangers and racing an invisible clock, adding up numbers for the sake of an unknown, intangible trophy, I will realize this quest is a fool’s errand. A million! It’s too much. It’s inconceivable. It’s more than just out of reach; it’s a light year away and the space race is long over. At my current pace, earning 56,000 in seven hours, I’ll reach a million in 126 hours and 12 minutes. Time and money are worth more now than when I was ten-years-old. That’s what having less of one and more of the other does—squashes unnecessary dreams. But maybe those are the best ones to have.

I’m still playing New Super Mario Bros. 2 and will be for many moons, even if the gauntlet has proven too dense, and I, too weak. And I’ll still argue it’s the greatest 2D Mario game ever.

Because it’s the one I’m playing right now.