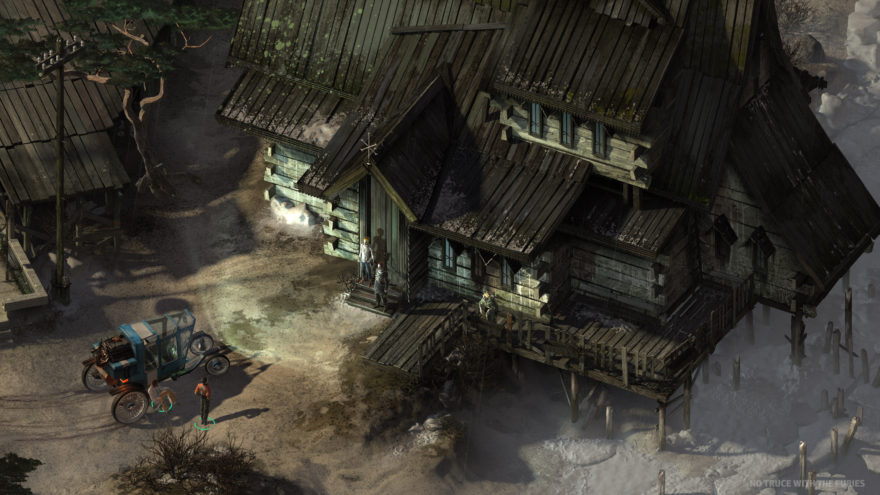 That gruff throat noise is unmistakable. If you’re familiar with Sikth, the British progressive metal band, you should recognize the distinctive low tones of vocalist Mikee Goodman‘s voice in the new teaser trailer for No Truce With the Furies.

Goodman is an unexpected choice to contribute a voiceover for a videogame trailer, but it makes a lot of sense. His chilling delivery in tracks like “Mermaid Slur” and “Tokyo Lights” is equal parts enchanting and terrifying. Which seems to be close to the mixture of emotions that the Estonian studio ZA/UM (previously Fortress Occident) is aiming for with its “fantastic realism” RPG, due out next year.

ZA/UM says that this teaser should be considered the first taste of the game’s world, music, and voice acting. It leaves a very good impression. The music you can hear is provided by another British band called British Sea Power, and they’ll be composing the entire soundtrack for the game.

A new website with new information on No Truce With The Furies is apparently going to be launched in January 2017. But there’s already plenty about the game we already know that makes it a very intriguing project.

For starters, it’s described as a “police procedural role playing game,” mostly because you’ll be playing as a disgraced detective lieutenant. But get this: this law enforcer thinks themselves more of a rockstar than a police officer. “Put on your disco pants,” reads the game’s description. “Wander a gorgeously rendered seaside city in another world, solving one last case.”

wearing a disco outfit “to the maximum effect”

This brings us to the game’s setting, which has apparently taken 15 years to develop, and is described as “fantastic realism.” The game’s central city is a melting pot of cultures and technology. It has phone booths and motor-carriages. Techno music and liquor stores. There are elements of Bauhaus and Dada, neo-grotesque fonts and transistors, communists and fascists.

The other big feature of No Truce With The Furies that’s worth highlighting in this brief summary (and I mean really brief, there’s a lot to this game) is that mostly everything is handled through dialogue, even combat. Choices and consequences abound.

The thoughts your character has are also a huge part of this game. They’re all stored inside the Thought Cabinet where you can process them into original ideas. Some of these becomes skills that you can enact in the physical world, such as tuning your nervous system with electrochemistry, and wearing a disco outfit “to the maximum effect,” whatever that means. Others become doubts and memories, permanent beliefs that you can’t get rid of.

That’s not even to mention that the art is handled by oil painters who use a trick called “paintshading” that lets the game essentially be a “moving contemporary oil painting.” There are so many fresh ideas in the writing, systems, and artwork here that when the creators say “The role playing game is an emergent art form – and we’re set to light it on fire,” you can believe them. It seems like a lot to pull off, but heck, I reckon they can do it.

You can find out more about No Truce With The Furies on its website. It’s due out for PC, iOS, and Android in 2017.