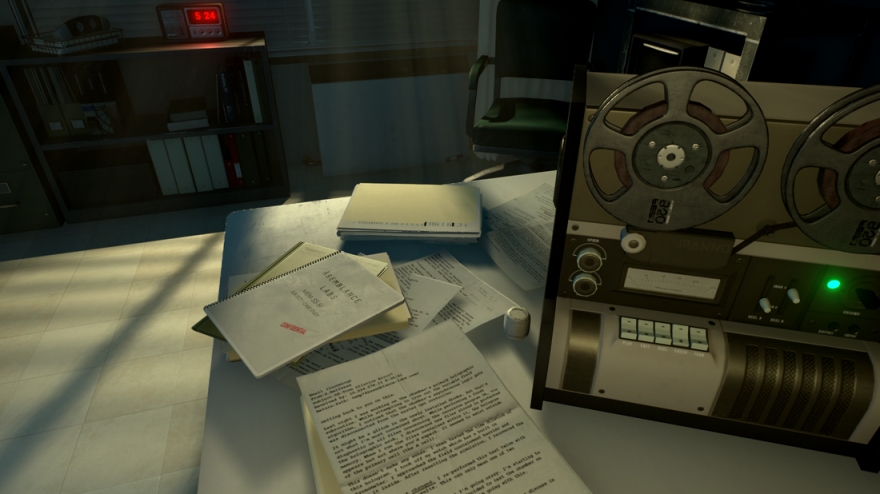 “You had a good life. But things changed,” explains the narrator of Asemblance as you begin your descent into a world of reconstructed memories. The machine asks how much of your past life you remember, then: “Are you sure you want to remember?”

Last year, Niles Sankey founded Nilo Studios out of a desire to tell new kinds of stories within videogames. An ex-Bungie employee who lent his creative vision to Halo: Reach (2010) and conceptualized the E3 2013 Destiny reveal, Sankey saw untapped potential in the anthology format of storytelling. Asemblance is the first episode in a new, ongoing series of experiences that takes its cues from television shows like Rod Serling’s Twilight Zone (1959-64), The X-Files (1993-present), and Black Mirror (2011-present). It’s slated for release later this month on PlayStation 4 and Steam.

“The overarching themes and tone for each game will be the same, but the plot, locations, and characters will be different,” Sankey told me. “I think it’s important that each ‘episode’ is a self-contained plot with a new premise.” But the game isn’t just a single narrative being doled out piecemeal. “That’s not what we’re making,” Sankey said. “Asemblance will have different stories in each episode, but each episode will be a self-contained experience.”

The team also hopes to follow in the footsteps of television by bringing in a wide range of writers from outside the studio. “But we are a small team with a very small budget,” Sankey admits. “For now, we have a good chemistry among the three of us, and we’re all inspired by the same types of stories and writing. We already know what the next episode will be and have more ideas for others, but we are excited to work with other writers. Our writing lead comes from the science-fiction and fantasy literary world, so if all goes well, we hope to do exactly what Rod Serling did with The Twilight Zone and bring in a handful of great writers to offer their own takes on the Asemblance concept.”

When I asked him about diverging ideas about the use of narrative in games, citing Halo: Reach and Destiny as two very different approaches to story, Sankey said it wasn’t a matter of shifting design philosophies across videogame creators but rather the needs of the project at hand. “I don’t think we’re necessarily at a fork in the road. There have always been games that prioritize and focus on different aspects of the experience—it really just depends on what the development team values,” adding, “Our focus with Asemblance definitely prioritizes narrative, but we also didn’t want the experience to be completely linear. Story traditionally relies on character, so we wanted to challenge you as the player character to internalize the world around you as you progress. It’s hard to say too much without spoiling the game.”

Sankey now spends his days working from home, with his girlfriend’s dog to keep him company, and gets to make the kind of game he’s always wanted to play. But does he miss his time at Bungie? “Definitely. I miss my friends and coworkers,” he says. “That studio is full of some of the smartest people I’ve ever met. I almost feel like it’s cursed in that regard. So many smart and capable people, all limited to one game. One game is not enough to express the potential of the people at Bungie. That’s one of the reasons I left. I made my contributions to a big franchise and now I’m ready to push in new directions.”

Asemblance lands on PS4 and Steam later this month. Check out the trailer on YouTube.