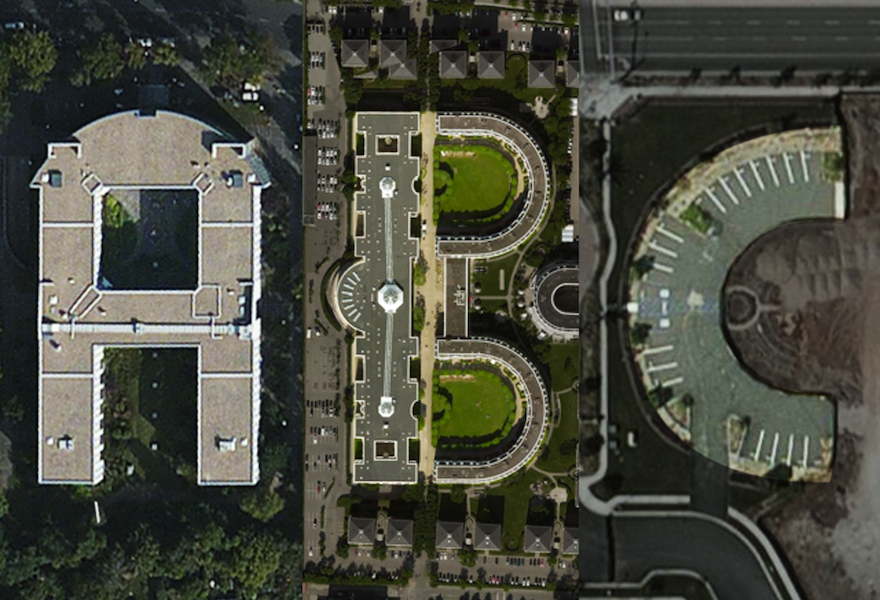 Imagine painstakingly combing through the entirety of Google Maps trying to find buildings, pools, and other structures that resemble letters, then compiling those images together to make new fonts created wholly out of aerial imagery. That’s exactly what creators Benedikt Groß (a computational designer) and Joey Lee (a geographer) did while working on Aerial Bold Typewriter, a new word processor that allows users to easily type full sentences using satellite images of various man-made structures.

“Satellite and aerial imagery are rich with stories,” write the duo, explaining how they came up with the idea for the Typewriter. In 2013, they released a book titled The Big Atlas of LA Pools, which used satellite images to catalog the various pools scattered around the Los Angeles area. While working on the Atlas, they found a love for these aerial photos and envisioned Aerial Bold, a new set of fonts created using letterforms—or shapes resembling letters—taken from satellite imagery across the entire planet. To fund this more ambitious project, they then successfully launched a Kickstarter in October of 2014 to help gather a team and build an algorithm to make the process easier.

“Satellite and aerial imagery are rich with stories”

Now they’ve released Aerial Bold Typewriter to showcase the various fonts they’ve created. As of now, the Typewriter features four fonts, each based on different real-world locales. The first is simply Aerial Bold Satellite, which allows users to type using satellite images, as previously described. Of note is that users can select a specific location, such as Germany, and the processor will only use images from that area. Second is Aerial Bold Buildings, which turns pictures of real-world buildings into vector graphics to make them easier to read. Last are Aerial Bold Suburbia and Aerial Bold Provence, which follow the same process as Aerial Bold Buildings, but using North American/European suburbs and tree patterns from the French countryside as their sources, respectively.

Each font also has a unique set of sound effects that play as users type, giving the Typewriter a pleasing and responsive feeling similar to what’s referred to within videogames as “game feel.” This can be seen in the thrills that accompany firing a gun in games like Nuclear Throne (2015), but Aerial Bold Typewriter helps demonstrate the value this concept has outside of games, as its use of sound manages to make the simple act of typing exciting. Personally, I wouldn’t mind seeing more word processors with this kind of “type feel” in the future.

Fans of Aerial Bold Typewriter can also look forward to September 13th, when Groß and Lee will be teaming up with Penguin Random House to release ABC: The Alphabet from the Sky, a book compiling their fonts and going into more detail on the project overall. Until then, you can try Aerial Bold Typewriter for yourself over on Aerial Bold’s website.