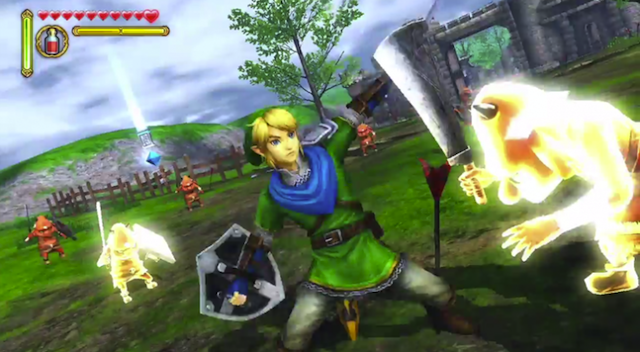 Nintendo announced a confounding but potentially cool new Zelda title for Wii U today. Dubbed Hyrule Warriors, the latest adventure for our peach-fuzzed wonder is being developed by Tecmo Koei, not Nintendo. The game will be chockablock full of action, as Link will find himself facing an unfamiliar game structure: the hack-fest. It’s pretty much Dynasty Warriors wrapped in a green tunic.

What gives? The takeaway from the conference was that Japan is turning into one giant gaming conglomerate. Before long every Japanese game property is going to bed with one another, and all Japanese game universes will converge before folding in on themselves. We were also shown during the conference that Yoshi is coming to Sonic, Megaman is coming to Smash Bros., and Luigi is starring in Dr. Mario, er, Dr. Luigi. And I hear cats and dogs are living together just fine.

This is something we’ve seen a lot of lately, from Project X Zone’s mash-up of Capcom and Namco, to Shin Megami Tensei crossing swords with Fire Emblem. This isn’t an entirely new phenomenon. We’ve seen Sega develop a stellar F-Zero and Capcom worked on some of the Zelda titles on Gameboy. But now that the crossovers and cross-game-development-overs are being farted out, it may indicate that the industry over there is hurting and needs gimmicks to shake things up. But on the bright side, this could lead to an official Salty Bet’s Dreamcast Casino. Fingers crossed!