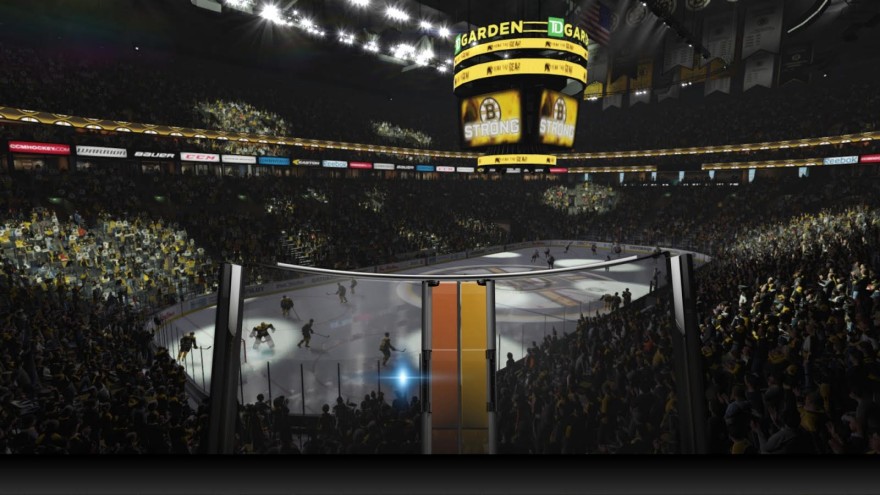 Here’s the truth: I’m conflicted about NHL 15. It does so much well, and yet it’s stripped down, and seems somehow incomplete.

But how do we decide what we think a game “should” contain to be considered full, or rich? Where is the list of features that are to be checked off to declare that a game is a success or designed well? We often measure games against the expectations created by genre conventions, and we do so implicitly. We evaluate in the context of genre and against the historical arc of development—reading is intertextual, always. Shooters need multiplayer to be complete. Role-playing games need customization to feel whole.

But what about sports games? It’s an especially relevant question given their iterative, year-to-year nature. We constantly compare the game to the previous installment, measuring progress on a technological curve that argues that the games should just get bigger, more complicated, with more features, and somehow more beautiful and lifelike.

By that standard, NHL 15 disappoints. But I’m not sure if that is really an acceptable standard for evaluating sports videogames anymore.

The game does seem to be “missing” quite a bit. Firing it up the first time, and compared to the feature-rich, exhaustive menu of Madden 15, the NHL 15 main menus seem weirdly barren.

I played a lot of NHL 14, and really grew to love it. In my review, I wrote about how much the game of hockey on the ice impressed me, despite the unnecessarily excessive fighting throughout. The videogame actually brought me closer to the sport of hockey, and reminded me of the grace and thrill, not to mention the absurd athleticism, of professional hockey players. With each goal I scored in the game, I loved scoring more and more.

And NHL 14 was deep and thorough, a bounty of game modes, each fuller than the last. Online leagues, Ultimate Team, career mode, GM mode—there was so much, and honestly, I spent most of my time in just one mode: Live the Life, where Abe Stein became a hockey player. As much time as I spent in the game, and I played quite a bit, I didn’t possibly have enough available free-time to get deep into multiple modes of play. After a full-time job, and after spending time with my family, I make time for recreational media consumption, of which playing videogames represents only a portion. So by my standards I played a lot of NHL 14, and almost all of it was in one game mode.

By and large on the ice, NHL 15 continues and improves upon my experiences with last year’s game. The game is beautiful to look at. The introductory sequence and the overall televisual production features branding and interstitials from NBC Sports, who have an extensive deal to broadcast NHL games on television. In addition to this, the sportscasting tandem of Eddie Olczyk and Doc Emrick are included in the game, and not as uncanny valley digital denizens but as full-motion video recordings on top of a digitally modeled arena. I was caught off guard the first time I saw it, but I love it. Maybe it’s because it flashed me back to days of playing FMV games on laserdisc; maybe it’s just so much better compared to the half-dead, cold-fish sportscasters in Madden.

I watch a lot of sports, and for my money, Mike “Doc” Emrick is one of the best announcers in all of sports, not just hockey. He is bright, enthusiastic and erudite. He doesn’t shy away from being verbose, but he knows how to support a television broadcast with his voice. For the most part, he translates well into NHL 15, though his recordings and their execution don’t quite live up to the standard he sets on television. But how could it, really? Any expectation that a procedural commentary system could meet the standard of improvisation and locution that a master sportscaster brings to the craft would be undue and unsupported. It’s a great example of how we measure the quality of a sports videogame not against the standard of interactive media, but against the standard of televised sports the games attempt to model.

But then again: look at that ice. Grooves and scrapes, reflections and glints. For a long time, the NHL series from EA has felt great, and his kinetically captured the experience of skating on ice, literally on the blade’s edge between control and collapse. There are no quick turns or stops; the momentum of careening through space feels right. You can feel a difference between different quality of skaters, too, in their varying abilities to stop, start, and change direction.

NHL 15 seeks to capture the chaos of this world. The puck skitters and bounces, players careen and wipe out, glass breaks, and the goals get rammed off their moorings. Passes will bounce around and skitter through traffic as players wrangle for control. The puck will sometimes bounce awkwardly and rebound off goalies realistically. All of this disorganization helps to support the feeling of success when you complete a tape-to-tape pass, or execute a great deke in a one-on-one.

But NHL 15 is like a reconditioned lemon: gorgeous and broken. It’s a hot mess. The game is ridiculously buggy, and there have been numerous occasions where the game has either frozen and I’ve had to quit the application, or it simply hard crashes, and spits me to a crash report screen in the PS4 operating system. The menus are brutally slow, especially in online modes. Many times I have sat, just waiting for the game to register controller input so that I can back out of a menu, staring at the goofy smirk of some NHL player on his Ultimate Team card.

This translates to the ice. Sometimes a goal is scored when clearly the puck never went in. Sometimes the commentators begin talking about events that have no connection to what is happening in the game. Sometimes button presses are simply not registered on a face-off coming out of a stoppage of play.

NHL 15 is like a reconditioned lemon: gorgeous and broken.

While these brokennesses mount, I can’t help but keep playing. NHL 15 is the first attempt at a hockey game on the new generation of consoles, and so I almost expect things to be off somehow. I can forgive the occasional frustration in NHL 15, because I know how it compares to NHL 14, and because I know there will be an NHL 16. I can’t simply pull the game out of that iterative context while playing.

And then there’s Be A Pro mode, my favorite way to play in NHL 14, which is now unplayable because of the sort of small design changes and cracks in the surface that typify the rest of the game. There is no interaction with your coach during a game, unlike the robust experience in NHL 14 where you receive ongoing grades and opinions from your coach. (Apparently this will be patched in later this year, but where will I be then?) You have to sit and watch entire shifts when you are on the bench. Last year, you could skip ahead in the match to when your line was on the ice. But how much time am I supposed to have? The lines between iterations, and expectations, are growing hazier by the year.

And yet I find I’m even forgiving of these design issues and flaws. NHL 15 still feels like a step forward, an improvement, a more focused and accurate experience of hockey than ever before. Maybe I’m really forgiving. Or maybe I’m just accepting. Now that the NHL season is actually starting, and I’ll have plenty of hockey to watch on television, I’m sure I’ll keep right on playing, trying to emulate in the videogame what I am seeing on TV. Exclusivity agreements between the sports leagues and publishers have all but eliminated choice in the sports simulation market, so we get what we get. Liking a sport enough equates to liking the game based on it.

NHL 15 is not very good. It’s not whole. But I keep playing, because it’s enough.