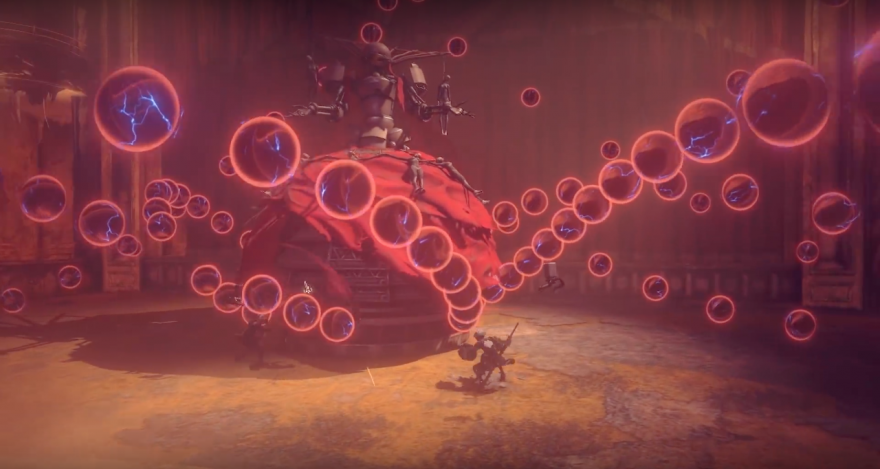 The Drakengard action-RPG spin-off Nier (2010) wasn’t a critical or commercial smash when it was released six years ago. It was just kind of… there. Neither terrible, nor great, its wieldy story was praised, while its lackluster visuals and janky combat left a lot to be desired. Nonetheless, Nier became an unlikely cult classic, which steamrolled players’ desire for a sequel. And now that sequel, the PlatinumGames-helmed NieR: Automata, is nearly here.

During E3 2016, a year after the project was first announced, a release window (early 2017) and extensive footage for NieR: Automata was showcased. A boss battle teaser and a full trailer later, NieR seems to be shaping up to be an improvement upon its divisive predecessor. In the Nier follow-up, the player will be able to play as multiple characters as the story progresses, most prominently shown as a cute, but deadly, android.


The best bullet hell games are the most chaotic. There’s the Touhou series, a Japanese-bullet hell powerhouse whose surrounding culture is more honed into its story, characters, and hyperactive music. The games themselves, however, are often plagued with immense difficulty. In the first Nier, bullet hell-esque boss fights inched their way in, possibly a first at adapting the commonly 2D-sidescrolling genre into an action-oriented, 3D-roamable dimension. In its sequel, NieR seems to take this bullet-chaos a step further.

The best bullethell games are the most chaotic

PlatinumGames’ last few titles may have been less than stellar, but watching the insanity of bullet hell-style bosses mechanize in a 3D setting makes it appear that the shift to PlatinumGames benefited the series. And who knows, maybe NieR: Automata will be Square Enix’s answer to the goofy and exhilarating PlatinumGames-developed Metal Gear spin-off, Metal Gear Rising Revengeance (2013). With core creators of the original game working on the game, players can surely expect a similar (but hopefully improved) experience.

Frantically dodge bullethell bubbles when NieR: Automata is out in early 2017 on PS4.