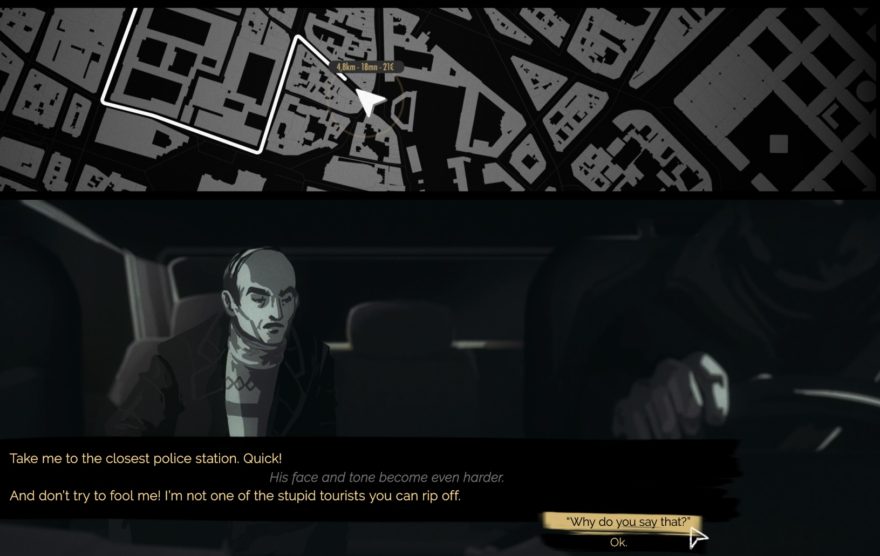 Night Call‘s shade of noir-infused drama seems to be one part Drive (2011) and two parts Taxi Driver (1976). Upcoming for PC, iOS, and Android, Night Call will have you playing as a Parisian taxi driver who hopes to find the killer who has orchestrated a number of recent murders around the city. But you don’t do this in the usual videogame way—shootouts in industrial wastelands, chasing a black figure across a rooftop—the whole game takes place inside your taxi.

Monkey Moon and BlackMuffin Studio, the two French studios collaborating to make Night Call, explain that in your role as night-time taxi driver, the people you pick up sometimes talk to you as they would a priest or, at least, a friend. They’ll speak what’s on their mind and confess to things they perhaps wouldn’t otherwise if you weren’t a transitory entity in their life. It is the information that you can acquire in these moments of dialogue that’ll help you to track down the killer—a goal the taxi driver is motivated towards as the victims were all previous customers, and he was the last person to see the latest victim alive.

While this may sound part-and-parcel for a videogame mystery, even if it is dialogue- rather than action-based, what makes it a little different is that the passengers who appear in the back seat of your taxi, and they order they arrive, isn’t scripted. It’s all randomized. This means you have to be attentive to each person’s thoughts and reactions at all times, open to the idea that not everything you hear and see will be a lead—”Some of them know things about the killer, others pretend to know things, and some just need to talk to someone,” tease the game’s creators. You’re not tasked with simply following a trail of neatly-arranged breadcrumbs laid by the game’s creators, but more actively trying find the signal amid the noise.

On top of that, Night Call also “aims to show the city of Paris like it is in reality,” not the cliché of the city of love, but what the game’s creators describe as a “gigantic city, always in movement, and full of very different people.” Hence the game uses a real city map for you to drive around—40.5 mi² in total apparently—which will demand you use the clues you collect to guide your investigation into the murders, looking for certain locations and specific people that might lead you closer to finding out the identity of the killer.

You can find out more about Night Call on its website. No release window has been given for it yet.