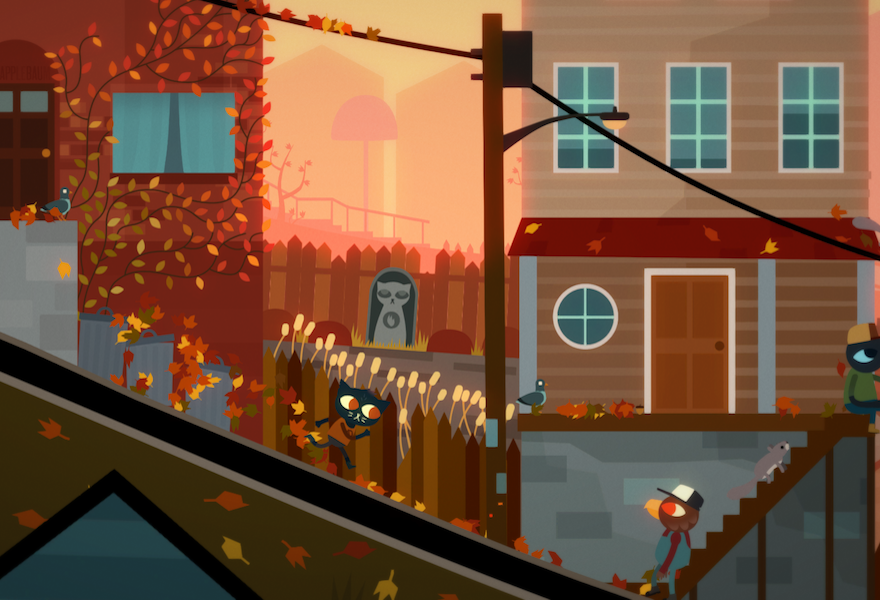 There are two types of stories we tend to tell in the Fall: scary stories, and stories aimed at winning awards. Night in the Woods wants to be both.

First announced with a Kickstarter campaign on October 22, 2013, Night in the Woods was pitched as a clever sidescroller twist on the adventure game, which quickly attracted attention from eager fans as they helped it earn over $150,000 dollars beyond its set goal of $50,000. The project was also warmly received by critics, who dug its young-adult angst, muted woodsy environment, and light horror themes. Kill Screen’s own Davis Cox went so far as to say that it “picks up where Gone Home left off.” According to a February 8th Twitter thread on the game’s account, it won’t be long until we find out if it delivers on that promise.

“Night In The Woods will be released this fall,” the game’s Twitter writes. “Date to be announced. Later.” Along with a cute gif of the game’s lead character rustling some autumn leaves as the word “FALL” fades into the background, the rest of the thread follows up the announcement with shareable wit and commendable bravado. “Tell your friends, tell your enemies, go into the woods and yell it at the trees,” we’re told. “‘Hey, isn’t fall when all the big games get released? Aren’t you worried about getting lost in the shuffle?’” ask rhetorical doubters. “Well, that’s kind of up to you now, ISN’T IT?” Night in the Woods replies, calling us to action.

The team is clearly aiming big

The team is clearly aiming big, hoping to capture the same kind of independent zeitgeist that last year launched the likes of Undertale and Cibele to compete with Rise of the Tomb Raider and Metal Gear Solid V for Game of the Year titles. Big games don’t have to come from big studios any more, and Night in the Woods knows this. They just have to have big ideas.

But are Night in the Woods’  ideas still big? When Gone Home was first released in August of 2013, it shook up the adventure game market by paring down the genre’s familiar comedic and epic questlines to a personal story about a young woman’s self-discovery. This was set alongside tense allusions to mild horror in a secluded Oregon cabin, while also drawing the player in with non-violent, fully-explorable first-person scavenger hunts. In this way, it makes sense how Night in the Woods, with its sidescrolling, apathetic teenage misfits and forested secrets, felt like a successor to that same creative spirit. Both games ask questions about young self-identity, and both put forth new ways for the player to interact with the story.

But in 2016, Night in the Woods is now joined by the time-travelling shenanigans of Life is Strange‘s awkward Max Caulfield, the freewheeling dialogue of Oxenfree’s bitter teenage gang, the choose-your-own-haunted house wilderness of Until Dawn’s petulant assholes, and the middle-aged crossroads and walkie-talkie confessionals of Firewatch’s amateur woodsman, Henry. I could go on. None of this is to discredit Night in the Woods. By all accounts, it seems set to tell a compelling, personal, slightly spooky story about young self-discovery in the forested outskirts of a dilapidated town while questioning how exactly adventure games should play. But competition in this area is stiffer than it was even three years ago. David Lynch’s children are many, and young-adult games are quickly gaining popularity to match their filmic counterparts.